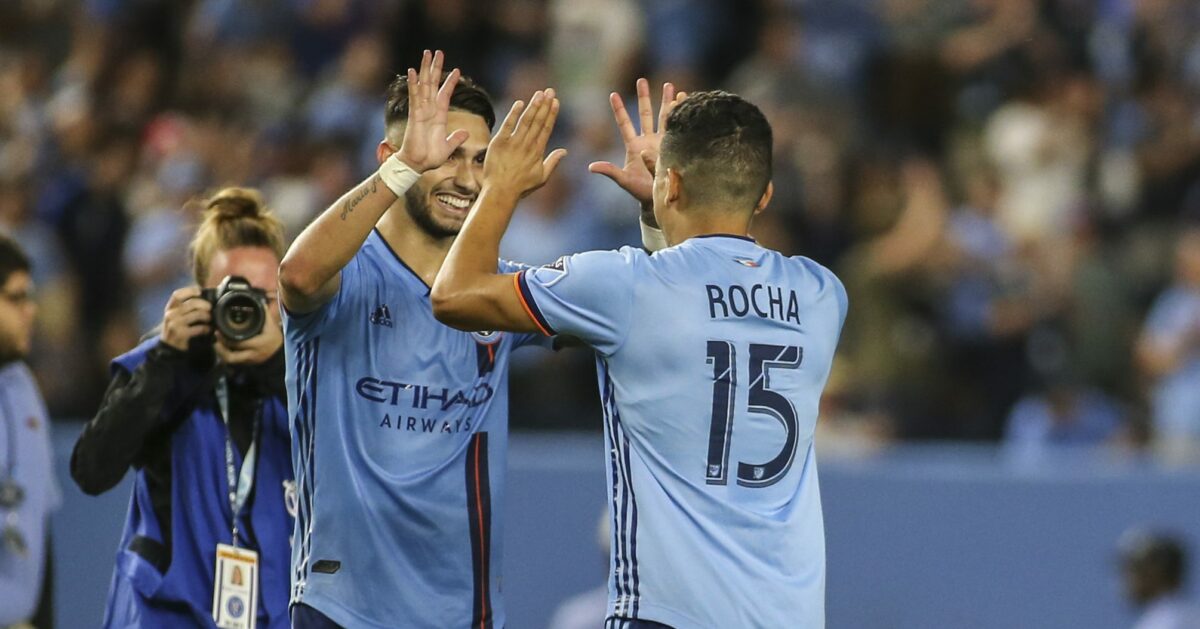 NYCFC rallied from an early deficit to top the New York Red Bulls, while Real Salt Lake rode some outstanding Nick Rimando saves to a shutout win against the Colorado Rapids.

Saturday’s MLS action also saw the Philadelphia Union keep pace with Atlanta United atop the Eastern Conference with a dominating win over D.C. United. Toronto FC scored a late goal to knock off the slumping Montreal Impact in the latest edition of their rivalry.

Elsewhere, the New England Revolution scored a late goal to take down the Chicago Fire, and the San Jose Earthquakes broke a record while beating the Vancouver Whitecaps.

The year’s second Hudson River Derby was testy and full of drama as the rivalry has grown to become accustomed to, but it was the home side that emerged victorious in the massive Eastern Conference clash.

New York City FC topped cross-river rivals, the New York Red Bulls, 2-1 on Saturday night at Yankee Stadium behind goals from Maxi Moralez and Heber on each side of the halftime whistle.

The victory for NYCFC closes the gap to one point behind East leaders Atlanta United, who currently sit on 48 points through 27 matches. Meanwhile, the Red Bulls remain in fourth place on 41 points following the defeat.

The Red Bulls took the lead on 10 minutes when Alex Muyl received the ball inside the NYCFC penalty area and blasted a left-footed effort into the top corner past goalkeeper Sean Johnson.

Muyl’s goal was his third of the 2019 campaign, and marks the end of a scoring drought that dates back to March 16 against the San Jose Earthquakes.

On the brink of halftime, the hosts leveled the score at 1-1 when Maxi Moralez was cut down inside the penalty area by Michael Murillo.

Moralez buried the ensuing penalty kick and made sure the two sides were equal heading into the locker room.

NYCFC continued to assert itself into the match early in the second half, and Dome Torrent’s side pulled ahead in the 53rd minute when Heber’s clever flick at the near post beat Red Bulls goalkeeper Luis Robles.

The match saw a wild ending in second-half stoppage time when Ronald Matarrita was shown a straight red card after video review for head butting Murillo on the sideline.

The Bronx side will return to action next Saturday against the Vancouver Whitecaps, while the Red Bulls host the Colorado Rapids that same evening.

The Philadelphia Union bounced back in major fashion on Saturday with a convincing home win over rivals D.C. United.

Jim Curtin’s side rolled to a 3-1 win with Kacper Przybylko, Brenden Aaronson, and Ilsinho all getting on the scoresheet. It was the Union’s ninth home win of the season and their sixth consecutive league triumph over the Black and Red.

Przybylko kicked things off early as the German scored his 12th league goal of the season five minutes in. Kai Wagner’s near post cross from the left flank hit the streaking Przybylko whose effort went off the post and in.

The quick start for Philadelphia continues as Brenden Aaronson’s return to the starting lineup came with a goal. Przybylko fed a ball to Aaronson who turned to his left and beat Bill Hamid to the bottom left corner. It was Aaronson’s second goal of the season.

Ilsinho got in on the action in the 37th minute, dancing between a pair of D.C. defenders before hitting a low shot past Hamid. It was Ilsinho’s fifth goal of the season, while Przybylko picked up his second assist of the night.

Luciano Acosta’s individual effort and finish pulled a goal back for D.C. before the hour mark, but the Black and Red could not find any additional goals after that.

The Union defended well against D.C. for the remainder of the match to seal the win. However, the only negative for the hosts was Alejandro Bedoya’s yellow card which rules him out of next weekend’s home date with Atlanta United. The teams come into that showdown level on points atop the Eastern Conference.

D.C. next face the Montreal Impact after losing their 10th league match of the season.

The New England Revolution picked up an impressive late winner from Gustavo Bou to down the Chicago Fire at home.

Both sides exchanged blows in a back-and-forth first half. New England had the better of the possession numbers and they did get one goal to show for it. Wilfried Zahibo scored his first goal of the season in the 17th minute. The Fire took over from that point and they managed to equalize with a Francisco Calvo diving header from short range in the 41st minute.

New England got its electric winner thanks to some poor breakout play by the Fire. Bou created a turnover in the Chicago end in the 86th minute and proceeded to smash the ball into the top corner from about 20 yards out to send Gillette Stadium into a frenzy.

New England will remain at home and face Toronto FC next Saturday and Chicago heads to Ohio to face the Columbus Crew.

Toronto FC came from behind to take the 401 Derby by a 2-1 score over the Montreal Impact at BMO Field.

Attacks were difficult to come by in the opening half. Montreal was better at retaining the ball, but they never really threatened with it. Toronto was better, but it was nothing but half chances in the first 45 minutes.

Both sides came out firing in the second half, however. Bojan Krkic scored his first goal since arriving from Barcelona when he fired a low shot in from long range to give the visitors the lead in the 49th minute. Toronto would equalize in the 63rd minute through Marky Delgado. Evan Bush made a diving punch to clear the penalty area, but the ball fell right to Delgado, who put a shot in through the disorganized defense into the empty net.

Toronto experienced a series of mad scrambles in the Montreal penalty area after going in front. The last of these resulted in the game winner in the 81st minute. Michael Bradley and Jozy Altidore worked a give and go to get into the box to begin with and a deflection saw the ball through to Justin Morrow. Morrow took a shot that made it through Bush before bumbling over the line before any Impact defenders could come to the rescue.

The Rocky Mountain Cup will go to Real Salt Lake after a rather bland match went nuts in the dying minutes at Rio Tinto Stadium.

Neither side was able to find a breakthrough in the first half, but it wasn’t for a lack of trying from a Rapids standpoint. They pelted Nick Rimando’s goal with 15 total shots. Only four made it on target, but they certainly had a few chances to find the opening goal and Rimando was certainly tested.

The script flipped over in the second half. Real Salt Lake was able to have more of the ball and they made progress towards equalizing the shot total. Regardless, none of what passed for scoring chances came close to bearing any fruit and it looked like the game ended scoreless. However, the game turned on its head in the 89th minute.

It started with Kei Kamara seeing red for a studs-up challenge on Brooks Lennon. RSL then thought they had scored the winner through Damir Kreilach only to have VAR step in and call it back for offside. Finally, in the 95th minute, RSL were awarded a penalty for handball in the box, allowing Joao Plata to score. Jefferson Savarino added a second in the 99th minute in what turned out to be a crazy match in the end.

Both sides are next in action on Saturday night. RSL head into Cascadia to take on the Portland Timbers and the Rapids will fly into the Big Apple to face New York City FC.

The Earthquakes fired a new MLS-record 43 shots, breaking their previous record of 32 set in their 3-1 win over the Whitecaps last month at BC Place.

San Jose wasn’t afraid to fire away once again Saturday night against lowly Vancouver. However, while the shots came easy, the goals didn’t, and neither did the lead at first.

Vancouver scored the opening goal of the match on a pretty curler to the far post by Jakob Nerwinski in the sixth minute, beating Daniel Vega low and to the far post.

The Earthquakes responded almost immediately as Chris Wondolowski found Judson running in at the post. Judson, returned the favor, beating Whitecaps keeper Maxime Crepeau to the far post in the seventh minute to tie the match at one apiece, Judson’s first goal of the season.

Despite the loss, Crepeau had a strong match individually, racking a record 16 saves on San Jose’s new league-record 43 shots.

San Jose went ahead 2-1 in the 34th minute as a wide-open Wondolowski tapped in a corner easily at the far post. Andy Rios netted his first-career MLS goal in the second half, beating Crepeau to the far post in the 73rd minute to give the Earthquakes the insurance goal late in the night.

The Earthquakes outshot Vancouver a combined 75-11 in their two games this season, defeating them 3-1 both times. The win comes at a key time for the Earthquakes, who are looking to solidify their spot in the playoffs entering the final month of the regular season.

San Jose takes on Orlando City at home next Saturday at Avaya Stadium.