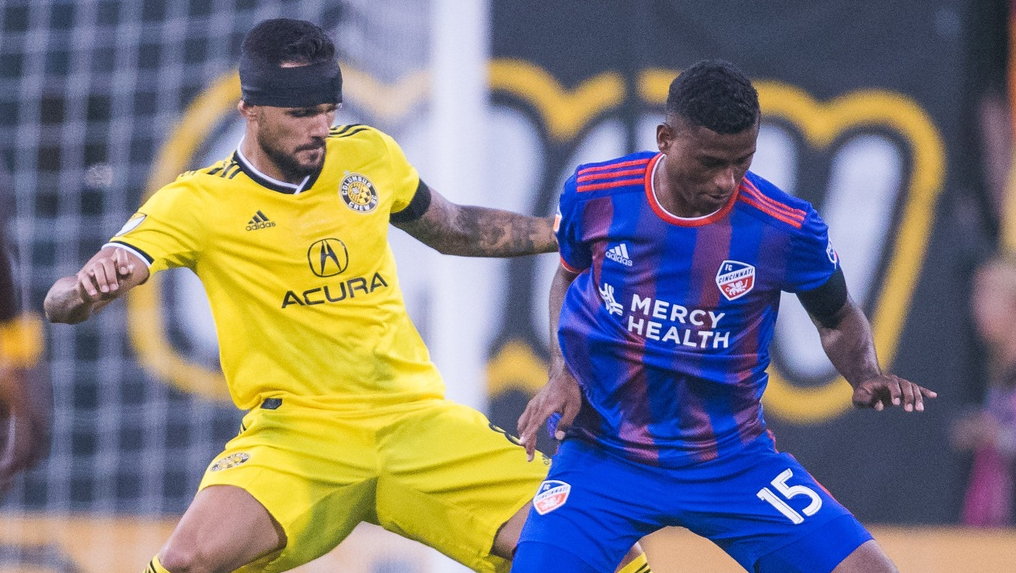 FC Dallas rolled to a dominant home win over Minnesota United, clinging to a 5-3 final scoreline. Brandon Servania led the way with a brace, while Michael Barrios registered a hat trick of assists.

The evening slate saw the Colorado Rapids put a halt to San Jose’s winning ways, while the Portland Timbers rolled over the Vancouver Whitecaps in late Saturday action.

SEATTLE – The Seattle Sounders and New England Revolution played to  3-3 draw in a wild, back-and-forth affair in front of 38,826 at CenturyLink Field on Saturday afternoon.

Harry Shipp opened the scoring for the hosts in just the second minute, tapping in a Jordan Morris cross that rolled undisturbed through the penalty area to the back post.

The Sounders looked likely to run away with the match in the early going, then got stretched and discombobulated under pressure as the half-hour mark neared.

Michael Mancienne equalized in the 27th minute, heading a Carles Gil corner kick past goalkeeper Stefan Frei. The goal was initially waived off for a foul on the Revolution, but allowed following video review.

The visitors took the lead only eight minutes later when Edgar Castillo found forward Gustavo Bou at the top of the six-yard box. The Argentine forward easily finished past Frei for the 2-1 lead.

The Sounders retook the lead with a pair of goals midway through the second half.

Shipp scored his second of the day at the far post in the 65th minute, finding himself unmarked as he headed a Joevin Jones cross past goalkeeper Matt Turner.

Nicolas Lodeiro put the Sounders up 3-2 just a minute later, gathering a pass from Jordan Morris and sending a deflected shot past Turner.

The visitors equalized from the penalty spot after Jordy Delem was whistled for a handball in the penalty area in the 87th minute. Gil converted the ensuing penalty kick, sending a left-footed shot into the side-netting to tie the match at 3-3.

In a match that could have easily seen at least three or four more goals, both teams will surely regret their inability to convert open looks down the stretch. The Sounders still sat in second place in the Western Conference at the end of the match, but could potentially fall to fifth by the end of the weekend. The point earned from the draw pushes the Revolution past the Montreal Impact for the sixth spot in the Eastern Conference.

Darren Mattocks was left isolated on a corner and headed home his third goal of the season to get the Orange and Blue on the board in the 16th minute, and Emmanuel Ledesma doubled the lead moments later in the 23rd.

The Crew pulled one back just before halftime though, Gyasi Zardes beat Przemylaw Tyton from the spot after hitting the woodwork from point-blank in open play moments prior.

The equalizer came just after the hour mark, thanks to Pedro Santos who earned it from distance in style.

A chaotic ending saw Cincy weather a storm and cling to a point to stop a four-game losing streak.

The teams will meet again at Nippert Stadium in 15 days.

The points were shared at BMO Field as Toronto FC had to dig deep for a draw at home against Orlando City.

The lone goals on the evening were separated by eight minutes after the hour mark in the second-half. Benji Michel registered his second goal of the season, slotting home a Chris Mueller assist to cap off a superb fast break by the Lions.

Patrick Mullins leveled the score for TFC in the 77th minute, coming off the bench and scoring his first league goal since July 2018. Brian Rowe made four saves to earn the Lions a point, while Quentin Westberg made one for TFC.

FC Dallas scored five goals in a league match for the first time this season, helping them roll to a 5-3 home success over Minnesota United.

The hosts led 3-2 at the halftime break as Reggie Cannon’s finish from a tight angle in stoppage time ended a five-goal opening 45 minutes. Ethan Finlay scored a brace while Ryan Hollingshead and Santiago Mosquera also found the back of the net for Luchi Gonzalez’s side.

Hassani Dotson’s long-range shot leveled things at 3-3 in the 73rd minute, but FC Dallas would have the final say.

U.S. U-20 Men’s National Team product Brandon Servania scored a pair of goals in an eight minute span to put the game in Dallas’ grasp for good. His close range finish in the 85th minute made it 4-3 before the midfielder got on the end of Paxton Pomykal’s helper in stoppage time to seal the win.

Mason Toye was sent off in the 96th minute for the Loons, which will likely see him suspended after picking up the straight red card.

The win moves Dallas to two points of the Loons in the West table.

Corey Baird played the hero for the visitors, scoring his first career MLS brace in the process. Baird’s first goal came in the 38th minute, leveling the score after Johnny Russell broke the deadlock seven minutes prior for SKC.

Russell’s wonderfully taken free kick beat Nick Rimando, but Baird scored from a rebound after Albert Rusnak hit the post from a free kick of his own.

Felipe Gutierrez rattled the left post prior to halftime from a penalty kick.

Baird sprung RSL in front for good in the 70th minute, capping off a fast break and assist from Jefferson Savarino. Baird now has three league goals this campaign.

RSL are in sixth while SKC sit in 10th.

Conor Casey’s Colorado Rapids made it back-to-back home league wins after a 2-1 success over the San Jose Earthquakes on Saturday night.

Diego Rubio registered the game-winning goal while also assisting on the Rapids’ opener in the first-half. Kellyn Acosta’s long-range shot broke the deadlock in the 44th minute with Rubio getting credit for the helper.

A minute of Kei Kamara hit the post for Colorado, Valeri Qazaishvili leveled the score for San Jose. His long-range effort beat Tim Howard to give the Georgian international eight league goals on the season.

Rubio would save the best for last though as his long-range shot would settle the points at Dick’s Sporting Goods Park.

Colorado are 10 points out of the final playoff spot while San Jose are six points clear of dropping out.

Make it two wins out of two for the Chicago Fire to start August as they downed the Montreal Impact 3-2 at SeatGeek Stadium on Saturday.

Bastian Schweinsteiger’s 88th minute header proved to be enough as the Fire held on for three points, despite seeing the Impact hit back to tie things up late in the second-half.

Schweinsteiger set up Dax McCarty for the opening goal of the match in the eighth minute, while Nemanja Nikolic doubled the Fire’s lead in the 19th minute from a right-footed finish.

Bacary Sagna headed in Jorge Corrales’ cross in the 76th minute to draw the Impact level, but Schweinsteiger would have the final say as he scored his eighth career MLS goal.

The Fire are in 10th while the Impact are in seventh despite being tied on points with rivals TFC.

Giovanni Savarese rotated his squad heading into Saturday’s Cascadia showdown with the Vancouver Whitecaps, but that didn’t stop the Portland Timbers from delivering an emphatic victory.

Diego Valeri (two assists) and Sebastian Blanco (goal, assist) led the charge as the Timbers rolled to an impressive victory at Providence Park, a win that came despite the absence of star striker Brian Fernandez, who was rested.

Blanco opened the scoring with a long-range blast in the 28th minute, but that finish was topped by a highlight-reel volley by Whitecaps teenager Theo Bair just eight minutes later.

The second half was all Timbers, with Marvin Loria scoring a long-distance goal of his own in the 55th minute. Jeremy Ebobisse provided an insurance finish in the 90th minute to preserve a victory that keeps the Timbers two points behind FC Dallas for 7th place, and the final playoff spot in the West.

The loss keeps the Whitecaps in the Western Conference basement, two points behind the Colorado Rapids for last place in the West.