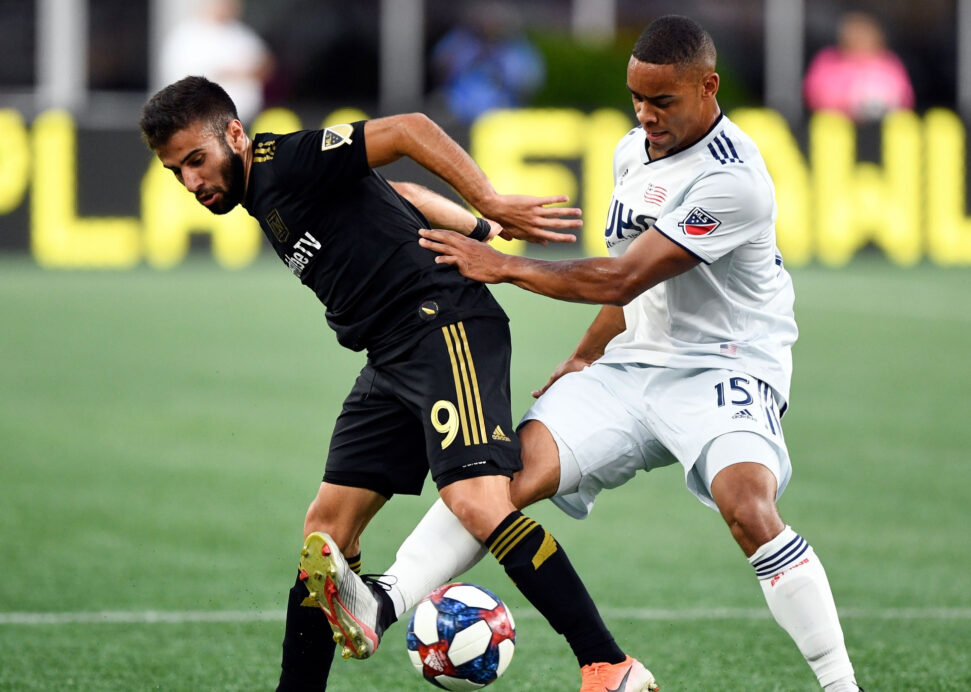 The New England Revolution saw their unbeaten run end on Saturday night at the hands of the top team in Major League Soccer.

LAFC used goals in each half to down Bruce Arena’s side, 2-1, and eclipse the 50-point mark. Diego Rossi and Latif Blessing found the back of the net in the road success for Bob Bradley’s bunch.

LA’s other team had a much rougher Saturday, with the Zlatan-less Galaxy suffering a lopsided loss in Atlanta.

Atlanta United jumped atop the Eastern Conference for now with a 3-0 beatdown of the L.A. Galaxy at Mercedes-Benz Stadium on Saturday.

A pair of Galaxy own goals separated by 20 minutes sprung the Five Stripes into a two-goal advantage before halftime. Dave Romney was the unfortunate figure for the first in the 23rd minute before Giancarlo Gonzalez was unable to avoid his first own goal in MLS play two minutes from the break.

Gonzalez’s day got even worse in the second-half as the Costa Rican defender was guilty of a penalty against Emerson Hyndman. Video review went in favor of Atlanta and Josef Martinez slotted in from the spot to ice the three-goal win.

The Galaxy had few answers on a day when they were forced to play without suspended star Zlatan Ibrahimovic.

The Galaxy are in fourth in the Western Conference after the loss.

The New York Red Bulls posted a clean sheet win at home on Saturday as they downed Toronto FC 2-0.

Alejandro Pozuelo rattled the right post in the 41st minute or TFC, which was the visitors best look of the night.

Kaku’s shot in the 55th minute was deflected in off centerback Chris Mavinga which broke the deadlock at Red Bull Arena. It was an unfortunate bounce from Mavinga who couldn’t do much about the final result.

Justin Morrow was sent off late for TFC, two minutes ahead of Kemar Lawrence’s finish to ice the two-goal win.

The Red Bulls sit in fourth place in the Eastern Conference while TFC is in eighth place.

The New England Revolution’s MLS-best, 11-game unbeaten streak came to an end on Saturday night, falling one game short of the franchise record, as Western Conference-leading LAFC picked up a 2-0 win at Gillette Stadium.

The visitors went ahead in the eighth minute as Jordan Harvey played a long ball to Diego Rossi down the left sideline, and sent an impressive chip over Matt Turner and inside the far post from the edge of the box.

LAFC almost doubled the lead in the 41st minute when Carlos Vela had an open look from out by the penalty spot, but it ricocheted around before Andrew Farrell swooped in to clear it off the line and keep it 1-0 at halftime.

Bob Bradley’s squad did find a second goal in the 72nd minute after Eduard Atuesta and Steven Beitashour played a one-two into the box. Atuesta sent it wide left to Harvey and he centered it to Latif Blessing, who cut in to avoid Farrell’s slide tackle and finished in close to set the final score.

LAFC improved to 16-3-4 heading into next Sunday’s home game against the New York Red Bulls, while the Revs (9-9-6) will look to bounce back next weekend out on the West Coast against the Seattle Sounders.

Tesho Akindele broke the deadlock in the 13th minute, finishing nicely after Ruan’s through ball sprung the forward.

Edwin Gyasi and Santiago Mosquera had shots saved by Brian Rowe in goal, which was Dallas’ closest efforts of tying things up.

Orlando City eventually padded the lead in the 90th minute as Sacha Kljestan played in Carlos Ascues, who beat Jesse Gonzalez down the middle of the goal.

FC Dallas drop to sixth place in the East while Orlando City is in ninth.

Nippert Stadium in Cincinnati saw two teams that were trying to end extended winless streaks and it was the visitors who took the spoils thanks to a late goal.

Wasting little time, Allan Cruz opened the scoring from point-blank range for Cincy in the sixth minute to earn his team-leading fourth goal of the campaign.

Hwang In-Boem would find an equalizer late in the half though. From distance, the South Korean cleaned up a ricochet that drifted out of the box.

It took until the 84th minute but the Whitecaps took all three points from the counter, Felipe Martins picked up his first goal of the season and the strike from the Brazilian was good for the final say of the evening as Vancouver snapped a nine-game winless skid.

The Whitecaps are up to 11th in the West while FC Cincy remains bottom in the East.

The Chicago Fire picked up their first road win of 2019, downing the Houston Dynamo, 1-0, at BBVA Compass Stadium.

Nemanja Nikolic’s strike just before halftime was all the visitors needed to escape Texas with three points. The Hungarian was set up by Nicolas Gaitan from a corner kick and Nikolic made no mistake as he roofed a shot past Joe Willis.

Dax McCarty came close to doubling the Fire’s lead in the 59th minute, but rattled the left post instead.

Romell Quioto had the best chance late to steal a point for the Dynamo but his shot was saved by Ken Kronholm.

The Dynamo’s struggles continue as they drop to ninth in the West. Chicago is in 10th in the East.

It was a nine-goal affair at Dick’s Sporting Goods Park as the Colorado Rapids rolled past the Montreal Impact, 6-3.

Conor Casey’s bunch used a hat trick from Kei Kamara and a trio of assists from Jack Price to run out winners. The hosts held a 4-1 halftime lead with a pair of own goals being scored.

Kamara’s own goal after 18 minutes was the only lead the Impact had on the night before Colorado flexed their muscles. Evan Bush’s own goal leveled the score three minutes later, before Kamara scored a brace in a nine-minute span before halftime. Diego Rubio’s header in the third minute of first-half stoppage time made it 4-1.

Maxi Urruti’s right-footed shot in the 54th minute pulled a goal back for the Impact, but

Crew newcomer Luis Diaz served up a 65th-minute assist that Zardes headed home to help the Crew equalize in a match largely dominated by the Earthquakes.

San Jose opened the scoring just before halftime when Magnus Eriksson converted a penalty kick awarded when Harrison Afful was whistled for a handball after blocking a Cristian Espinoza shot with his arm.

The Earthquakes outshot the Crew 19-9, and held a nearly 2 to 1 edge in possession, but couldn’t convert that into goals against a Crew side that has pieced together a four-match unbeaten streak.

San Jose will look to get back to its winning ways with a trip to Colorado on Saturday, while the Crew prepare for their first MLS meeting against Ohio rival FC Cincinnati.

Jefferson Savarino delivered a goal and an assist to help RSL push its unbeaten run to four matches in the first match of Mike Petke’s three-match suspension for his actions toward a referee in a Leagues Cup match.

The day started perfectly for NYCFC, when Alexander Ring collected an Anton Tinnerholm pass at the top of the penalty area, turned to his left perfect and unleashed a hard and low shot past Nick Rimando for a fourth-minute opener.

RSL took some time to respond, but eventually took control in the 37th minute when Savarino latched onto a Kyle Beckerman pass and unleashed a tight-angled left-footed blast past Sean Johnson for the equalizer.

The second half was all RSL, with Albert Rusnak unleashing a right-footed blast from 23 yards out to make the score 2-1.

Nick Besler added an insurance goal in the 88th minute when he re-directed a Savarino shot with a clever back-heel to make the final score 3-1.

The victory moved RSL into sixth place in the Western Conference, with a trip to Sporting Kansas City up next. NYCFC, sitting in fifth in the East, will look to regroup at home on Thursday against the struggling Houston Dynamo.