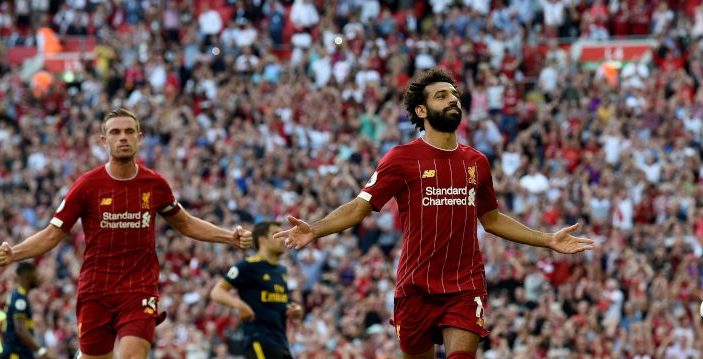 A pair of Premier League unbeatens faced off at Anfield with the home team remaining perfect after 90 minutes.

Liverpool used a brace from Mohamed Salah to hand Unai Emery’s Gunners a 3-1 defeat. The win was the Reds 12th consecutive league win dating back to last season, breaking a club record of 11. Joel Matip’s finish in the 41st minute handed Jurgen Klopp’s side a first-half lead before Salah added a pair in the second half.

His first came in the 49th minute after David Luiz was whistled for tugging the Egyptian back inside of the box. Salah extended Liverpool’s lead to 3-0 nine minutes later for his third goal of the season. Lucas Torreira pulled a goal back late for Arsenal, but it was a mere consolation for the London visitors.

Elsewhere, Bayern Munich and Borussia Dortmund picked up huge road wins while Manchester United were shocked at Old Trafford by Crystal Palace. Napoli faced a trip to Fiorentina in their Serie A opener. Juventus downed Parma to claim the first three points of the new season. Real Madrid had to settle for a point in a 1-1 draw with Valladolid.

Manchester United suffered their first loss to Crystal Palace in 28 years, losing 2-1 at home to the South London club. Patrick van Aanholt’s stoppage time winner sealed the win for Palace who conceded an equalizer three minutes prior. Jordan Ayew’s first-half finish had Palace up after 31 minutes, but Daniel James would level for the Red Devils in the 89th. Marcus Rashford rattled the post earlier in the second stanza from the penalty spot which could’ve at least given the Red Devils a point. Van Aanholt’s low drive squeaked past David de Gea to hand Palace a win.

Bayern Munich left Gelsenkirchen with three points after a 3-0 road success over Schalke. Robert Lewandowski netted a hat trick for Niko Kovac’s side who picked up their first league win of the season. The Polish striker’s first came in the 20th minute after Kingsley Coman was fouled by Jonjoe Kenny. Lewandowski’s best effort came in the 50th minute as he found the top-left corner with a free kick. He capped off his hat trick in the 75th minute, finishing off a Coman assist past Alex Nubel in goal. Bayern host Mainz on Aug. 31st.

Borussia Dortmund erased a first-half deficit at Koln on Friday to run away 3-1 winners. Jadon Sancho scored a goal and added an assist in the road win. Dominick Drexler’s header in the 29th minute put the hosts ahead, but Dortmund would fight back late in the match. Sancho picked up a pass from Thorgan Hazard and slotted in to level the match in the 70th minute. Achraf Hakimi’s close-range finish in the 86th minute put Dortmund ahead before Paco Alcacer capped off a stoppage time fast break to seal the points.

Real Madrid had to settle for a point on Saturday in a 1-1 home draw with Valladolid. The lone goals of the match came six minutes apart late in the second-half. Karim Benzema’s long-range strike in the 82nd minute put Los Blancos ahead, but Sergi Guardiola would level for the visitors in the 88th. Zinedine Zidane’s squad only had four shots on goal out of 22 in total, dropping points on Matchday 2.

Sevilla picked up three points on Friday in a derby showdown with Granada. A second-half winner from Joan Jordan was all the visitors needed to down their rivals for a 1-0 scoreline. Jordan’s right-footed finish in the 52nd minute not only capped off a fast break, but was the lone goal for either side. Granada was held without a shot on goal in the home defeat.

Defending champs Juventus picked up the first three points of the new season, downing Parma 1-0 on the road. Veteran defender Giorgio Chiellini played the hero for Maurizio Sarri’s team, finishing from a corner kick in the 21st minute. Wojciech Szczesny made a pair of saves to preserve the clean sheet in Juventus’ opener.

Napoli scored a pair of goals in each half to run away 4-3 winners on the road at Fiorentina. Lorenzo Insigne scored the game-winner for Carlo Ancelotti’s side in a seven-goal thriller. Dries Mertens and Insigne each scored in the first-half to put Napoli up 2-1 following Erick Pulgar’s ninth minute penalty kick goal for the hosts. Nikola Milenkovic leveled the match for Fiorentina in the 51s minute, but Napoli would continue to put pressure on the hosts. Jose Callejon’s right-footed strike made it 3-2 Napoli ahead of Kevin-Prince Boateng’s long-range effort after the hour mark. Insigne headed in Callejon’s assist in the 67th minute to seal the deal for Napoli who are level with Juventus on three points.

Nantes picked up their first three points of the new season, downing Amiens 2-1 on the road. The visitors took advantage of a red card to Amiens’ Bakaye Dibassy and scored a pair of second-half goals. Moses Simon’s composed finish in the 84th minute put the visitors in front for good, after Amiens drew level earlier in the second-half. Kalifa Coulibaly broke the deadlock for Nantes, but Bongani Zungu leveled things in the 71st minute for Amiens. Nantes are in 11th, while Amiens are in 14th.

Bordeaux also found the win column for the first time this campaign, defeating Dijon 2-0 on Saturday. It was a quick start for the visitors as Hwang Ui-Jo made the most of a rebound to score his first goal of the season. Loris Benito doubled Bordeaux’s lead in the 47th minute which would be enough for them to pick up the win. Dijon only had one shot on goal in the loss.

Here’s all of Saturday’s Ligue 1 results: