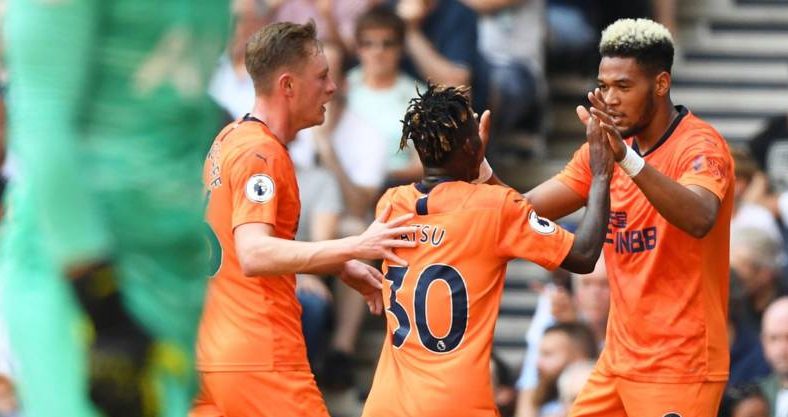 Joelinton was acquired by Newcastle United in hopes of providing goals and good hold up play for the Premier League side. Sunday saw the Brazilian striker do both exceptionally as the Magpies picked up their first win under Steve Bruce.

The striker’s first-half finish was all Newcastle needed to leave Tottenham Hotspur Stadium with a 1-0 win. Joelinton took advantage of a mental breakdown from Spurs’ backline, turning and rifling a low drive past a diving Hugo Lloris. Tottenham had close to 80% possession in the match, but was only able to force two saves from Martin Dubravka. Video review ruled in favor of Newcastle in the second-half after Harry Kane looked to have been bundled over by Jamaal Lascelles. No penalty was given as Spurs lost for the first time this campaign.

Elsewhere, RB Leipzig picked up three points at home after defeating Eintracht Frankfurt. Wolfsburg also was on the winning end in Bundesliga play, shutting out Hertha Berlin on the road. Manchester City picked up a win on the South Coast at Bournemouth, while Barcelona and Paris Saint-Germain rolled to home league wins.

Sergio Aguero shined for Manchester City, who got back in the winning column on Sunday after a 3-1 win over Bournemouth. His first goal came in the 15th minute, getting on the end of Kevin De Bruyne’s assist. Raheem Sterling slammed home from close range in the 43rd minute to double the Citizens lead, but Liverpool loanee Harry Wilson curled a wonderfully taken free kick into the top corner to pull Bournemouth to within one before halftime. Aguero netted his 400th career goal for club and country in the 64th minute, this time finishing David Silva’s assist. City sit second while Bournemouth are 11th.

RB Leipzig remained perfect to start the domestic season after a 2-1 home success over Eintracht Frankfurt on Sunday. Timo Werner rewarded the club after signing a new contract by scoring ten minutes in. Yussuf Poulsen set up the big German who made no mistake. Poulsen would call his own number in the 80th minute to double the hosts lead, before Timmy Chandler set up Goncalo Paciencia nine minutes later. However, Frankfurt couldn’t find an equalizer as Leipzig ran away winners.

Antoine Griezmann stepped in the limelight for the missing Lionel Messi to carry Barcelona to a 5-2 home success over Real Betis. The Frenchman scored a brace in nine minutes to swing the match in Barcelona’s favor after Nabil Fekir put the visitors in front in the 15th minute. Carles Perez extended Barca’s lead in the 56th minute, slotting a low drive into the bottom-left corner. Jordi Alba continued the dominant second-half with his first goal of the season before Arturo Vidal roofed a shot later for a 5-1 lead. Loren Moron added a consolation goal for Betis, who have lost back-to-back matches to start the season.

Atletico Madrid earned their second clean sheet win of the season after a 1-0 triumph over Leganes on the road. Vitolo played the hero for Diego Simeone’s team, scoring from a left-footed finish in the 71st minute. Jan Oblak made three saves for Atletico who have yet to concede this new season.

AC Milan did not start the Serie A campaign on a strong note, losing 1-0 on the road at Udinese on Sunday. It was a frustrating afternoon for Milan, who were held without a single shot on goal in the 90 minutes. Rodrigo Becao headed in the winning goal for Udinese in the 72nd minute, giving the hosts an important win to begin the season.

The final match of the day came from Turin as Torino squared off with Sassuolo. Simone Zaza led the way for the hosts with a brace, scoring in each half of a 2-1 win. His first came 14 minutes in, heading home Cristian Ansaldi’s cross home for his first goal of the season. Zaza connected with Andrea Belotti for the second goal of the match, beating Andrea Consigli down the middle of the goal. Francesco Caputo scored off a rebound for Sassuolo, but it would not spark a comeback as the visitors finished second best on the afternoon.

Paris Saint-Germain rolled at the Parc Des Princes to a 4-0 win over Toulouse. Eric Maxim Choupo-Moting scored a brace in the second-half, including his first in the 50th minute. The forward’s left-footed shot found the bottom-left corner to spring PSG into life. Mathieu Goncalves own goal five minutes later doubled the hosts advantage before Choupo-Moting scored his second of the afternoon. Marquinhos headed in Angel Di Maria’s cross seven minutes from time to cap the four-goal half in Paris.