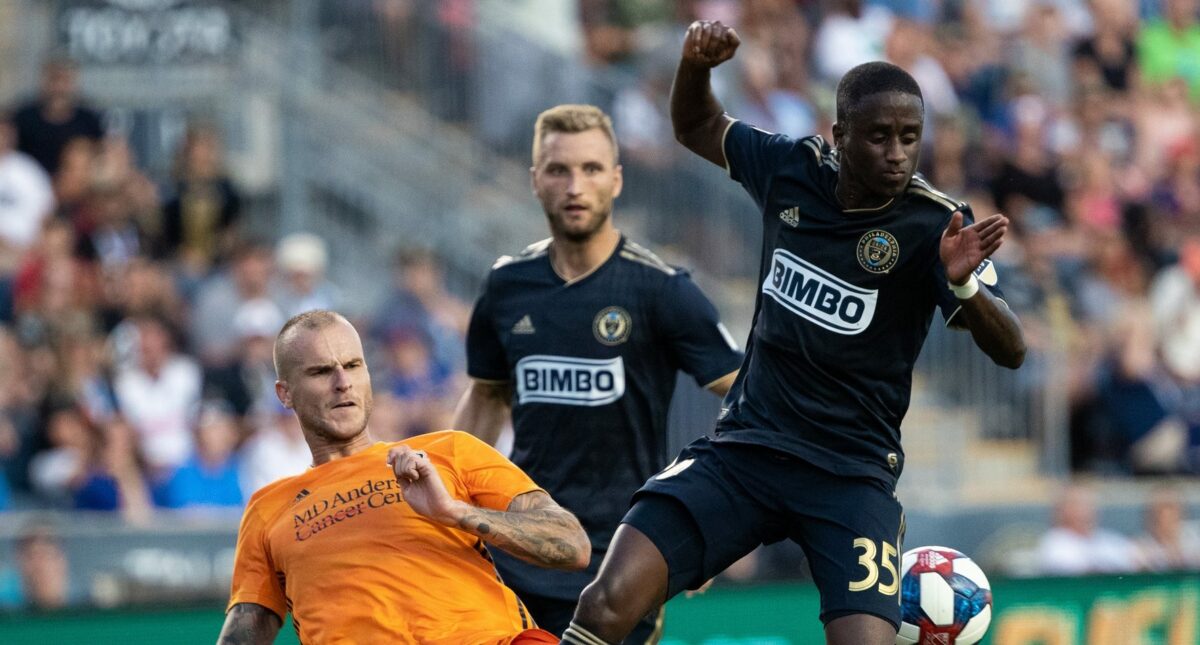 CHESTER, Pa. — Sometimes a team isn’t going to put in its best performance, yet still walk away with a victory. The Philadelphia Union remained atop MLS’ Eastern Conference on Sunday evening thanks to a 2-1 win over the Houston Dynamo, but walked away disappointed.

After a 5-1 beatdown of D.C. United seven days prior, Jim Curtin’s side had to claw for a win at Talen Energy Stadium over the slumping Dynamo. Jack Elliott’s 78th minute header proved to be the game-winning goal for the Union who claimed their eighth home success of 2019. Although they remain three points clear of surging Atlanta United, the team wasn’t thrilled with their performance against the West’s worst road team.

“Overall, not our best. I wanna thank the fans they pushed us in a big way when we needed them,” Curtin said. “Our roster and talent level is too good for a performance like tonight. We got an important three points, but we have a lot to work on if we want to be one of the elite teams in this league. We took a big step back from last week’s win in D.C.”

“We weren’t good enough with the ball, we turned it over in some key areas and I think we just could’ve been better. It’s disappointing because I thought we had a really good week of training and the players put in a lot of work. Everybody could do better.”

The Union were frustrated by the Dynamo in the opening 45 minutes, which saw the sides level at 1-1. Christian Ramirez’s first goal for his new club drew Wilmer Cabrera’s side level three minutes to halftime, while Kacper Przybylko’s 11th goal of the season came due to a blunder from Dynamo keeper Joe Willis.

Elliott came to the rescue with a rebounded finish from a header after striking the crossbar just prior. In total, the Union were outshout 4-to-2 on shots on goal and 11-to-9 in total. Luckily for them, they played a team struggling for consistency, but the Union can’t afford these performances against tougher competition later this regular season.

“We want to be playing at our maximum now that we have eight games left before we head into the playoffs,” Curtin said. “It’s not one thing. I say this because I don’t want us to be a middle of the road team, I want us to take a step up and be respected in this league. The players deserve it they’ve had a great season.”

“We’re going to have to fight every week if we want to reach out goal, this was another test. Some teams lower in the table don’t get these types of performances to go their way, so we’re at least happy it happened for us,” Przybylko said.

Elliott also had a goal wiped off earlier in half, one that referee Marcos de Oliveira did not go to VAR for. It was a tight angle, but regardless the Union were not as dominant in possession as they were at Audi Field last weekend. Andrew Wooten, Marco Fabian, and Alejandro Bedoya who all starred against D.C., failed to record a shot on goal.

For now the Union remain atop the Eastern Conference, but still have eight games remaining on the schedule. Six of those eight matches are against teams currently holding onto playoff spots, while dates with Atlanta United and LAFC are the headliners over the next month. The team will be happy to take three points at home, but better all-around play will be needed to avoid a major drop in the standings.

“It definitely felt good because we didn’t play our best tonight, we all fought for 90 minutes and at the end we’re happy and lucky to get a win. Houston tested us and luckily we didn’t drop any points to them,” Elliot said.