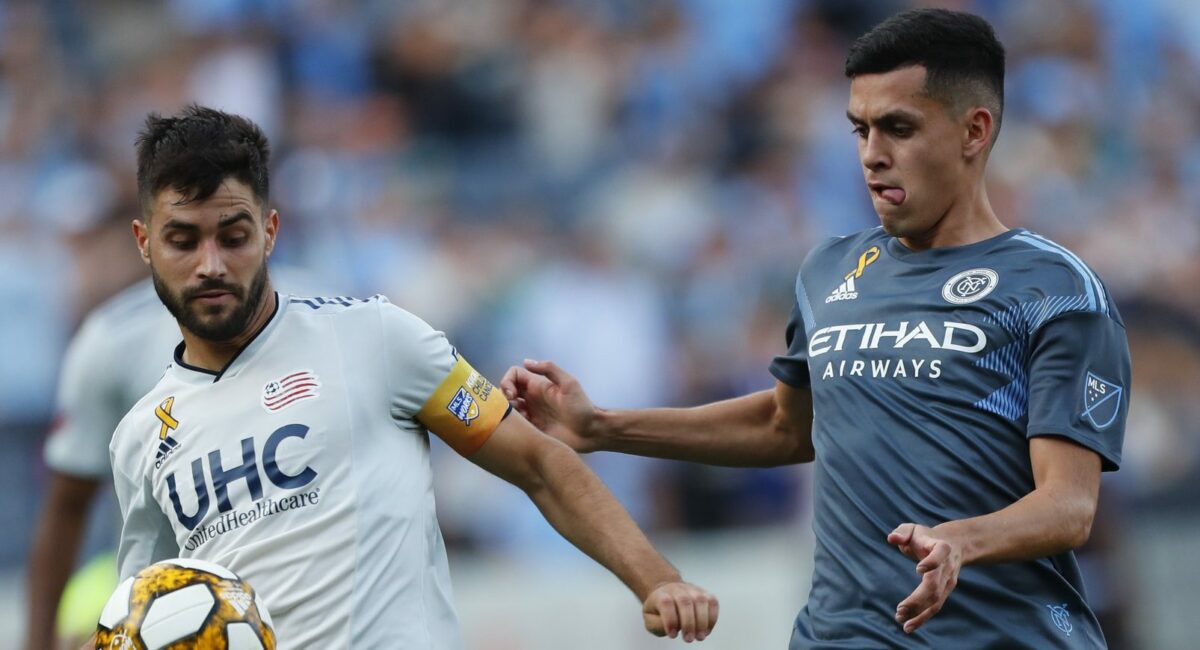 New York City FC is hitting its stride at an important part of the MLS regular season. Saturday’s late 2-1 home win over the New England Revolution propelled the Eastern Conference side to first place, now two points ahead of the Philadelphia Union.

Five consecutive wins, and six wins in the last seven, has Domenec Torrent’s side sitting pretty to earn a top playoff spot with six matches remaining. Even better, the club is seeing many players step up offensively, with Jesus Medina the latest to do so. His late penalty kick handed NYCFC its 15th win of the league season, tied for most in the East with Philadelphia and Atlanta United.

“We’ve said many times that soccer belongs to the players and I believe in that,” Torrent said. “It’s not the manager, it’s not the coach, it’s about the players. Right now they work very hard in the facilities and it’s important that every single player is ready to play. We lose Heber, we have another player. I’m very happy, especially for Jesus [Medina] because before the game I said you have to be ready against New England.”

“When I say soccer belongs to the players, it’s about that…If you have confidence in the moment, take the ball and shoot the ball,” Torrent said on the penalty kick

Medina, coming off the bench as a substitute for the 10th time this season, scored his goals 26 minutes apart after the Revs held a lead from the second minute on. His first goal came after being set up nicely by Anton Tinnerholm, before the Paraguayan scored the game-winner from the penalty spot in stoppage time. Alexandru Mitrita was brought down by Andrew Farrell and VAR ruled in favor of NYCFC, allowing Medina to score his first penalty kick goal of his MLS career.

It was his first brace of the season, which now gives him three goals in 2019. With Brazilian playmaker Heber out with an injury, Medina’s latest performance only proves to Torrent and his staff that he can contribute during this important stretch of the season.

“It was a very important victory. We’re conscious we can finish in first,” Medina said. “We had to win at home, and we were able to do it. It was a hard-fought victory, but we’re a few games away from our goal which is to finish in first place. We’re aware we’re playing well. We have a few games at home that are very important, so we have to continue to work hard and stay focused.”

“Maxi, asked me if I was confident and I told him I was [regarding the penalty kick goal]. I needed it and I think he knows that, and so he gave me the opportunity and I’m happy I was able to get the winning goal.”

NYCFC is riding a fifth winning streak this season, which certainly has them in the discussion of one of the best teams in MLS. Yes, Saturday’s match saw them dominate due to the Revs playing 80+ minutes a man down, but it was a never-give-up performance against a team in the race for postseason play.

With six matches remaining and the likes of the Union and Atlanta United right behind them in the table, the New Yorkers will need more performances like Saturday’s to remain atop the East. A three-match homestand continues on Sept. 11th against Toronto FC before hosting the San Jose Earthquakes three days later. A month may still remain until postseason play, but confidence remains high among the group who are happy with the run of results.

“I think we’ve come back a couple of times and won the game or draw the games at least, it’s just the kind of confidence knowing we have done that a couple of times that you have the quality to do it, just need to stay patient and believe in yourself,” NYCFC midfielder Alex Ring said.

“We slept once and got punished and I believe that was their only good chance on target, but luckily it was early, then we changed positions. We stayed patient, especially after red card a little bit, people think yeah they’re going to win, but it’s not that easy when you have seven bodies coming at you when you have the ball and shoot on target, but I am happy with the results.”