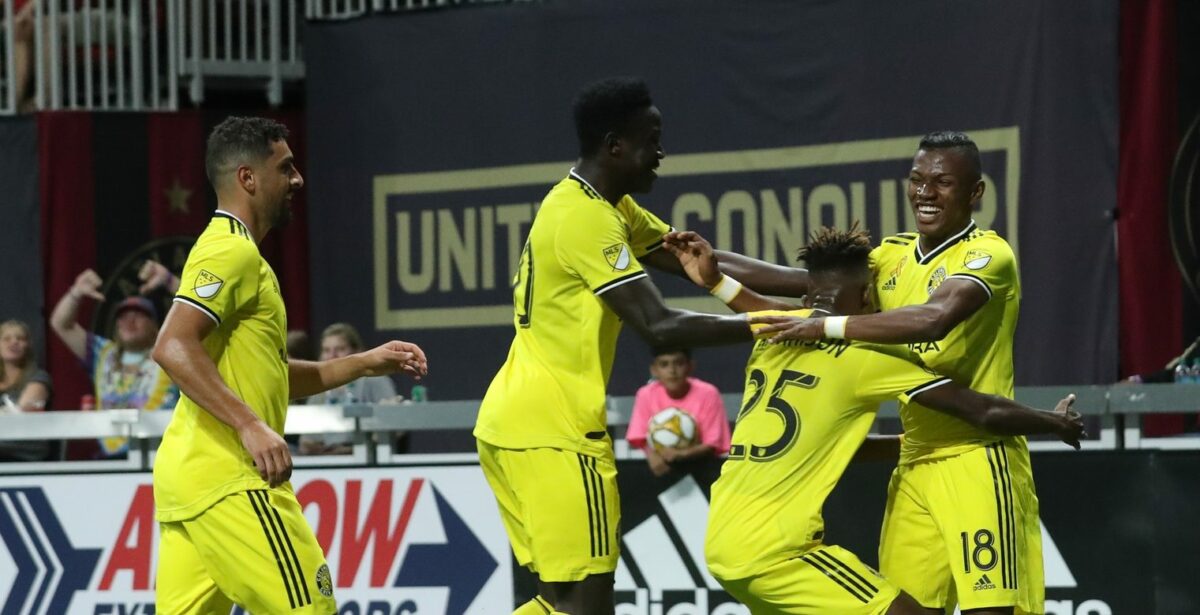 The Columbus Crew picked up it’s most important road victory of the season on Saturday, handing the defending MLS champs Atlanta United its first home defeat since April.

Caleb Porter’s side scored a trio of answered second-half goals to pick up a 3-1 win at Mercedes-Benz Stadium. The win was the Crew’s second in the past three league matches which now has them six points out of the final playoff spot with three matches to go. It was a crucial win against one of the top teams in the league which shows the team isn’t giving up just yet.

“Yeah. I mean, we went toe-to-toe with arguably the best – one or two – team in the league and the best team in the league last year. They’ve won two trophies already and they’ve been on a really good run of form. So for us to come in here and go toe-to-toe, to press them high, turn them over at times playing transition and then do what we need to win – which is what we did at the end of the game: absorb a bit, you know there’s going to be a push and we’re going to manage, [sending] a lot of numbers forward, a lot of balls in the box, and I thought we did that and that’s what good teams do,” Porter said.

“Look at their talent, their players, their budget. Look at everything that they are- the trophies they’ve won in a short amount of time – look at the guy that just walked by me [Josef Martinez] who is the best striker in the league. He gets one chance and it’s a goal in the back of the net. You think “Oh, this is the difference,” right? And second half we didn’t back down, we kept going and we got chances right off the bat. Should’ve scored the first one early, we scored an early one shortly thereafter and we kept going, you know? At 1-1 we didn’t sit back, we kept going and played to win.”

Josef Martinez’s 24th league goal of the season put the Five Stripes ahead early, but the Crew did not break the rest of the way. Gyasi Zardes roofed an equalizer in the 53rd minute, 20-year-old Luis Diaz bagged his second goal in his debut season, and Miles Robinson’s own goal iced the Crew’s comeback.

It was a performance that Crew fans had not seen against the big boys in MLS. Sure the team had picked up points this summer against the likes of the New York Red Bulls, Montreal Impact, and NYCFC, but they were looking for a statement win and it came with the odds stacked against them with the end of the season looming.

“The game plan worked, you know? We stuck to the game plan and we were aggressive from the start. Even though we went down a goal we didn’t back down, we kept pushing and we got a big one today,” Crew centerback Jonathan Mensah said.

With three winnable matches left on their regular season schedule, the Crew will need to take it game by game and only control what they can. Seventh place New England has a game in hand over the Crew, a midweek trip to the Portland Timbers on Sept. 25th. and also face NYCFC and Atlanta United in their final two matches.

The Crew showed on Saturday they can put up a fight against any team in MLS and trips to Toronto FC and Vancouver should be easier than Saturday’s daunting test in Atlanta. Veterans like Zardes, David Guzman, and Mensah will be leaned on during the final stretch and very well could propel the team into the postseason for a third-consecutive year.

“It was important for us. We had to win because we want to get into the playoffs so we have to win wherever we play,” Guzman said. “We now have one game at home. Today it was a big game against the champions and they’re a really good team, but we were well organized. During the week we worked hard and today we showed on the field that we could win.

“Winning was important because we had been working well, but the scores were not reflecting that. Today we played a great game, we were well organized and applied ourselves. I think we can get into the playoffs if we continue to play like this.”