Five Takeaways from the USMNT draw with Uruguay 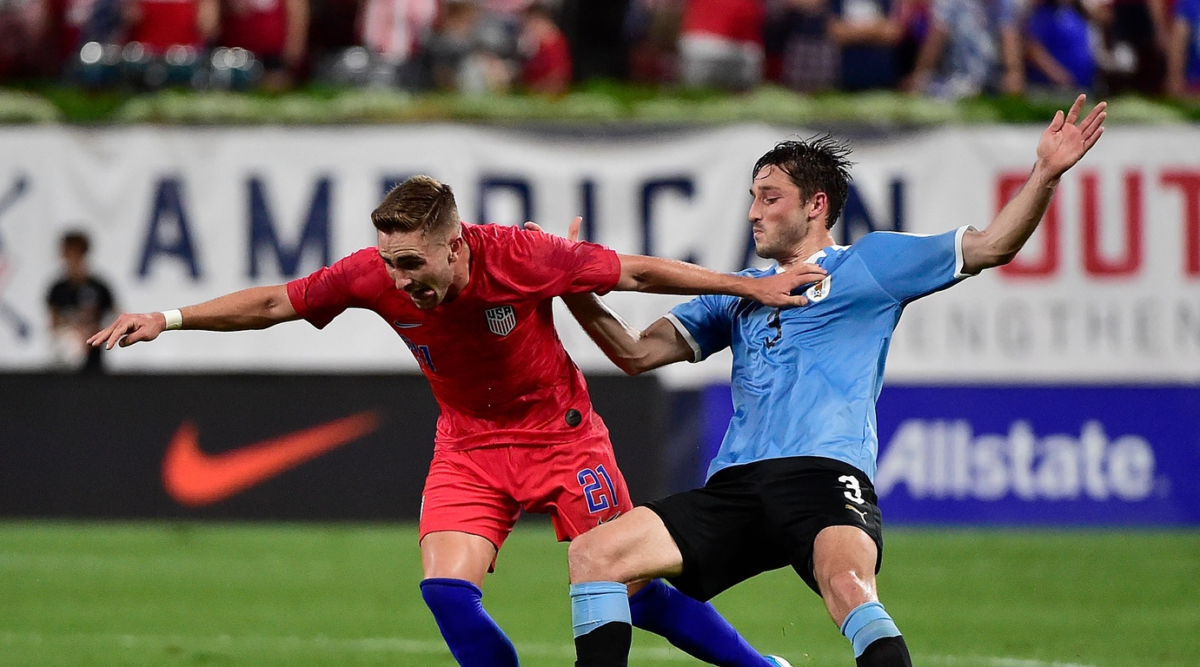 Progress that we could clearly see.

That was the simple request from U.S. Men’s National Team fans heading into Tuesday’s friendly against Uruguay. A victory against the South Americans would be nice, but simply seeing signs of a program improving, and a team adapting to its new style of play, was the modest hope after the USMNT’s 3-0 loss to Mexico last week.

Tuesday’s 1-1 draw with Uruguay did succeed on that front, but it would be a considerable overreaction to suggest it was the kind of performance capable of erasing all the fears surrounding the state of Gregg Berhalter’s reconstruction project.

Even before Jordan Morris’ awkward and fortuitous equalizer, the match had gone better than expected for an inexperienced USMNT lineup missing most of the players who would be considered first-choice starters. Uruguay didn’t have a first-choice lineup either, but the South Americans still had enough quality in the lineup to make it a worthwhile test for the young Americans.

The USMNT didn’t ace the Uruguay test, but did earn a good grade for showing poise against an opponent that may not have pressured much defensively, but still also didn’t make things easy. The Americans created chances, moved the ball well, and showed more composure than you would normally expect from a team so young.

Taken together, the September friendlies showed a program that is still early in its process under Berhalter, and far from resembling the well-oiled machine USMNT fans dream of when they hear talk about a possession-oriented team.

The friendlies also gave us a first glimpse at some members of the next generation of national team talents, a generation with tons of promise, and one that it’s time for Berhalter to fully embrace.

Tuesday’s lineup suggests Berhalter agrees, and that realization may ultimately be the most encouraging thing to take away from the September friendlies.

Here are some more takeaways from the USMNT’s draw with Uruguay:

He didn’t score a goal, but Sargent showed with his movement and hold-up play that he has the quality to take on the starting striker role in Berhalter’s attack.

Sargent was matched up against Uruguayan veterans Jose Gimenez and Sebastian Coates, a formidable pair of central defenders, and he looked right at home battling those two as he worked hard to find the ball and provide an outlet for his teammates.

Jozy Altidore remains the top striker option in the player pool as the program heads towards Nations League in October, but Sargent has shown himself to be a prospect who is already polished enough to handle a more regular role in the lineup, and he should be firmly positioned ahead of Gyasi Zardes on the striker depth chart going forward.

Dest is worth continuing to invest in

It may have come as a surprise to some to see Dest start in both September friendlies, especially after a Mexico friendly that saw him beaten badly on Mexico’s opening goal, but Dest’s performance against Mexico wasn’t as bad as some framed it, and he built on that with a steady showing against Uruguay.

The left back position has been a notoriously difficult one for the USMNT to fill over the years, and even though Dest isn’t a natural left back, he clearly looks comfortable in the role. He still needs some work on his defending, but as an 18-year-old he has time to grow and learn.

The lingering question is whether he is going to stay in the USMNT setup, or if he is going to be pried away by the Dutch Federation, which has already shown interest in him now that he has broken through at Ajax. Tuesday’s friendly could be the last time we see Dest with the USMNT this year given the fact the year’s remaining matches are Nations League matches, which would cap-tie him.

The good news for the USMNT is the talent pool has some very promising left back prospects in the pipeline, from Antonee Robinson to Chris Gloster, to younger prospects such as George Bello and Kobe Hernandez-Foster. Losing Dest to the Netherlands would be a painful loss after watching him develop as part of the USMNT Under-17 and Under-20 national teams, but the USMNT’s left back position still has more promising prospects than ever before.

Centerback is where Tim Ream should stay

With John Brooks continuing to be injury-prone, Ream’s solid showing against Uruguay provided a reminder of why he just might be the next-best option for the left-sided centerback position.

Aaron Long showed against Mexico why having a right-footed player on the left side of central defense can be problematic. His natural reliance on right-footed distribution put him in a difficult position that helped lead to one of Mexico’s goals.

Ream isn’t just a comfortable left-footed player, he is the best passing defender in the player pool, so having him in central defense gives Berhalter’s possession-based system a boost. That said, there is a trade-off because Ream isn’t the fastest defender, which is part of the reason his days as a left back for the USMNT should be over.

At 31, Ream is one of the older field players still in the mix for minutes, but until players like Matt Miazga and Walker Zimmerman improve, prospects like Chris Richards and Miles Robinson mature, and John Brooks finds a way to stay healthy, Ream will continue to have a part to play for the USMNT.

Tyler Boyd has a poor showing against Mexico, but Gregg Berhalter handed him another opportunity against Uruguay and the Besiktas midfielder responded with the kind of match that suggests he is still a good wing option.

While Boyd rebounded well, he still wound up losing ground to Jordan Morris, who played well on Tuesday even before his chested equalizer. Morris worked on the left wing against Uruguay, and showed he is capable of being a threat. This after coming on as a substitute against Mexico and drawing a penalty.

Morris is in the midst of an outstanding season with the Seattle Sounders, and he is showing clear signs of improving as a winger now that he is seeing regular time on the wing for his club. He looks significantly more comfortable out wide than he did back in March

Some more positives and negatives

Jackson Yueill helped his national team stock against Uruguay, in a match that was set up well for him to impress. It was a tidy performance, but not one that leaves you convinced he’s clearly better than other options in the player pool. You can’t help but wonder how he would have faired against Mexico’s pressure, and you have to wonder if Wil Trapp wouldn’t also have fared well against Uruguay’s minimal pressing.

Brad Guzan had one spill of a ball in the first half that almost proved costly, and was beaten to his near post on Uruguay’s goal (albeit on a well-struck shot). It wasn’t the kind of performance that left you feeling he should return to being a regular call-up.

Aaron Long was beaten on Brian Rodriguez’s goal, and wasn’t nearly as influential defensively as we have seen him be in previous matches this year. It was still better than his showing against Mexico, but that was a low bar. His overall form has dipped since the Gold Cup, but he remains a lock starter because nobody is stepping up to really challenge his spot at the moment.

Reggie Cannon made his fourth straight USMNT start, and completed all 23 of his passes, but he struggled with his positioning at times, and wasn’t as sharp defensively as we have seen him in the past. Did he do enough to lock down the starting role when Nations League arrives in October? The fact Berhalter didn’t give Nick Lima a start in either September friendlies suggests he’s ready to commit to Cannon for the foreseeable future.