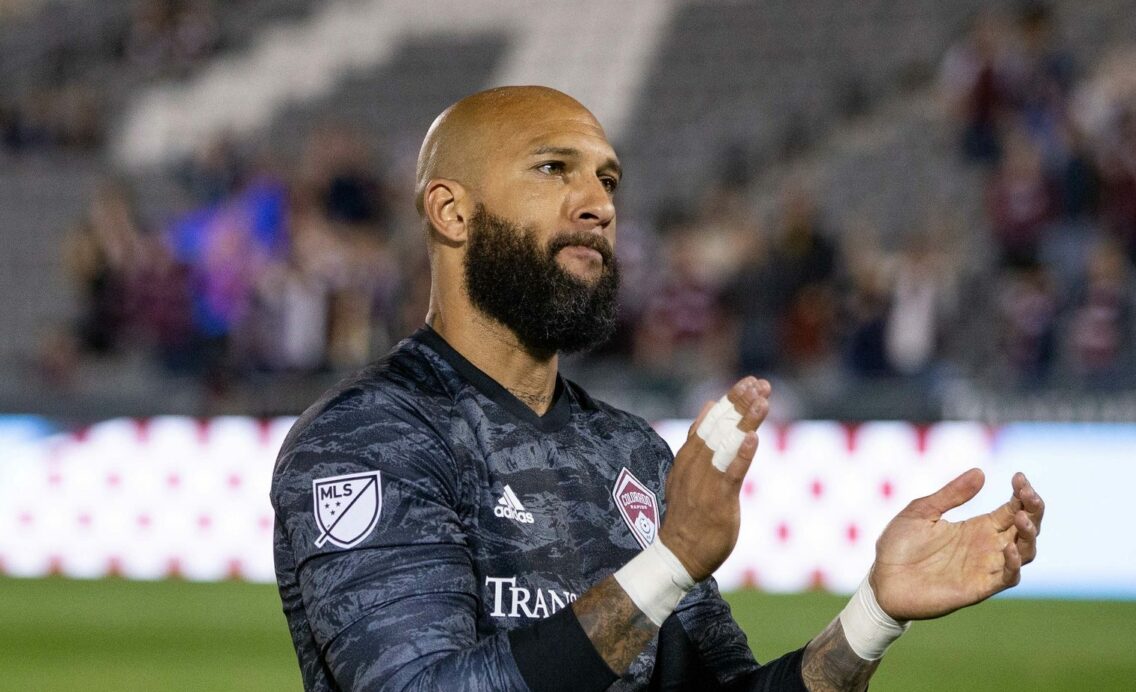 With the U.S. Men’s National Team taking on rivals Mexico at MetLife Stadium, it’s only fitting that the federation invited back one of its all-time greats to be a part of the atmosphere.

Tim Howard, born 40 miles from MetLife Stadium, was in attendance for the friendly in East Rutherford, which U.S. Soccer honored the longtime player with a prematch ceremony. Howard, a winner of 121 caps with the USMNT during his 15-year National Team career, is heading into the final few matches of an MLS player before hanging up his playing boots.

“Anytime I am in New Jersey it feels fitting, it all started here for me,” Howard said. “I had an amazing upbringing both on and off the field so yeah I like coming back and the fact that it’s going to end here is pretty cool.”

“I feel that I did it the right way by announcing it and getting it over with. I am ready for the next chapter, I am looking forward to the next few games because I know they are the final ones. They won’t make or break my career, but they are special. I had one hell of a journey and I am excited for the next chapter.”

Howard’s USMNT career features two Concacaf Gold Cup titles, three Concacaf Goalkeeper of the Year awards, and one inclusion into the Concacaf Best XI. He was a part of two World Cup squads (2010 and 2014), setting the record for most saves in a World Cup match with 15 in 2014.

With the USMNT continuing to battle El Tri for supremacy in Concacaf, Howard still savors the past experiences of suiting up for his country. With his professional career ending in few weeks, Howard reflected on his favorite moments of playing against Mexico.

“Those matches came with love, hate, and passion,” Howard said. “My favorite matches are the ones we won. I feel like all of the 2-0’s and Columbus are the special ones. I couldn’t imagine the nerves going through the players. I stayed away from them because I didn’t want to interrupt those guys when they are getting ready for battle. These are games that are in the top one or two that you will play in as a USMNT player. I was excited for them.”

“I will remember my career with joy and appreciation. It encompassed everything I thought it would be. It brought heartbreak, joy, pain, love, it was everything. I think of that 2009-10′ Confederations Cup team and the World Cup team, we could’ve went even farther and I’d roll up my sleeves and go to war with them everyday. I take those memories with me.”

With the next chapter of his career slowly approaching, Howard has started to consider what he will do next. A part owner of USL outfit Memphis 901 FC, Howard is hoping to remain involved with that following the end of his playing career. Coaching seems unlikely for the 40-year-old, but he wants to remain active in the game that he cherishes dearly.

“I love coaches on the sidelines pumping their fists, but I don’t like seeing my coach have to dissect three hours of game film on the plane home,” Howard said. “I don’t want to coach. I want to continue with the team in Memphis where I have an ownership stake and maybe be a sporting director or general manager. Guys like Nelson Rodriguez, Peter Vermes, Chris Klein, Denis Hamlett have been generous to allow me to shadow them when my career is done.”

With Howard soon to be off the playing field, the next generation of players like Christian Pulisic and Weston McKennie will be the new leaders of the USMNT. The Concacaf Nations League kicks off in October, which will also serve as qualification for the 2021 Gold Cup. Howard, who spent 14 years in England combined with Manchester United and Everton, remains excited for the future of U.S. Soccer.

“These moments are massive for this next generation of players,” Howard said. “When I think of South America or Europe, every game is crucial and we sometimes don’t have the luxury here. We have good young players playing good minutes in MLS and in Europe. It will be a test of their character, but I am excited to see them grow.”

Howard has six regular-season meetings remaining with the Colorado Rapids, starting with Saturday’s home date against the Seattle Sounders.