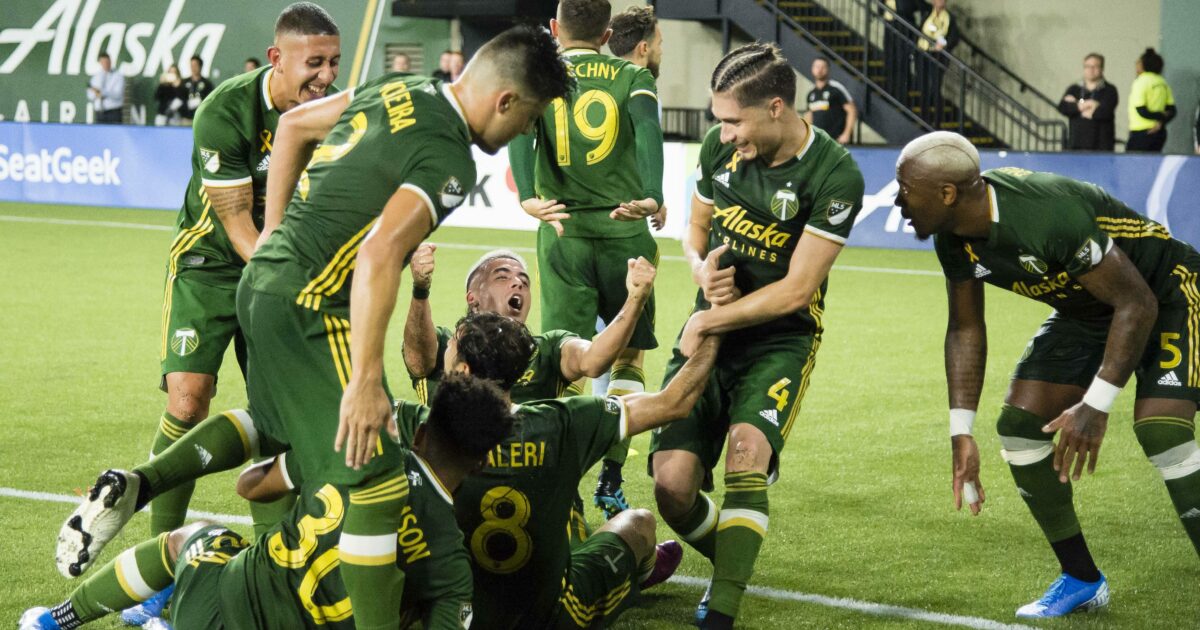 It was a light slate of MLS action thanks to the international break, but there were still several matches with impact on the playoff races in both conferences.

The most exciting match of the day saw the Portland Timbers score twice in the final seven minutes plus stoppage time against Sporting Kansas City to climb into a playoff spot. Their Cascadian rivals, on the other hand, were less fortunate in Colorado. The Rapids handed the Seattle Sounders a 2-0 defeat on the road.

Elsewhere, NYCFC got a late winner against the New England Revolution, LAFC settled for a draw in Orlando, and Toronto FC made mincemeat out of FC Cincinnati.

Here’s a rundown of all Saturday’s MLS action:

New England held on for quite some time while down a man against NYCFC, but they couldn’t finish things out as Jesus Medina scored twice for the home side in a 2-1 win.

Bruce Arena’s team got off to a flying start with a second minute goal from Juan Fernando Caicedo. but that would be the only good news on the night for the visitors. Antonio Mlinar Delamea was sent off in the ninth minute after VAR confirmed a foul denying an obvious goal scoring opportunity, which allowed the rest of the game to belong to NYCFC.

The Revs defense did well until Medina scored his first of the night in the 70th minute and they nearly held on for a point until VAR bit them once again in stoppage time. A replay review allowed referee Silviu Petrescu to penalize Andrew Farrell for fouling Alexandru Mitrita in the penalty area, leading to Medina’s winner from the spot in the 95th minute.

NYCFC will take the last-minute win to move into first place in the Eastern Conference and get ready for a midweek home clash with Toronto FC on Wednesday night while the Revs head to Florida to take on Orlando City next Saturday night.

Toronto FC scored early and often on their road trip to Cincinnati as they hammered the expansion team 5-1.

From the break, the visitors opened the scoring in the 10th minute. Marco Delgado found Patrick Mullins in traffic, and he beat Cincy goalkeeper Przemysław Tytoń with his right foot on the far post side.

Nick DeLeon picked up his sixth goal of the season when he cleaned up the aftermath of a corner, and Marco Delgado would triple the lead with a header moments later and the Reds cruised into halftime with a 3-0 lead.

In the 63rd minute, Micheal Bradley finished off an opportunity created by Tsubasa Endoh. Bradley strolled in the box and powered it in uncontested.

Nicolas Benezet would have the final say for Toronto’s outburst. Emmanuel Ledesma tallied an almost inconsequential penalty strike in the 90th minute.

FC Cincinnati will head into Quebec to take on the Montreal Impact next Saturday night while Toronto FC plays New York City FC at Yankee Stadium on Wednesday night.

Orlando City will take a point against the best team in MLS, but will really feel like they should have held on for all three at home.

LAFC featured a short bench thanks to seven players leaving on international duty. Despite being without leading goal scorer Carlos Vela, they got on the board first thanks to a 12th minute goal from Adrien Perez. However, they were also without top defender Walker Zimmerman, so their lead didn’t even last a minute as Nani got the Lions level in the 13th. Orlando City then went ahead in the 20th minute thanks to a Benji Michel goal.

Both teams had second half goals called back for various offenses. Perez looked to have his second of the night in the 51st minute but an offside flag took it off the board. Orlando thought they extended their lead, but their apparent goal was called back for a foul.

LAFC finally did level the score in the 78th minute when Diego Rossi scored his 15th of the year on a one-two play with Adama Diomande.

Orlando City host the New England Revolution next Saturday night and LAFC, who are now winless in their last three games, head up the east coast to take on the Philadelphia Union on Saturday afternoon.

The Colorado Rapids took advantage of a Seattle Sounders team that was decimated by the international break to get a big win at home.

The Rapids were rather efficient in the first half despite their inferior possession numbers. They took 11 shots in total, including a very impressive tight angle finish from Andre Shinyashiki to give them a 1-0 lead going into the break.

The second half played out much like the first with the Sounders hanging onto the ball and not doing much with it. The Rapids were even able to double their lead in the 70th minute when Shinyashiki found his second of the night. Even after going down two goals, the Sounders kept looking lifeless with the ball and the Rapids would come closer to finding a third goal than they ever came to getting on the board.

Colorado are in action in midweek on Wednesday at the LA Galaxy and the Sounders return home to host the New York Red Bulls on Sunday night.

The Portland Timbers had the best result of teams wrecked by the international break with their 2-1 home win against Sporting Kansas City.

The Timbers were able to scratch out the victory thanks to Bryan Fernandez’s 94th minute winner after coming back from a goal down. All this despite fielding only five subs, none of them defenders.

They had an early chance at a goal when they thought they had a penalty within the first ten minutes, however VAR stepped in to say Luis Martins wasn’t guilty of an illegal handball in the box.

SKC went in front with a most impressive goal from Benny Feilhaber in the 65th minute. Feilhaber launched a looping shot from well outside the right corner of the penalty area the managed to get over Steve Clark and into the top corner.

It was all Timbers from that point on, however. Jeremy Ebobisse got them level in the 83rd minute and Fernandez picked out the winner shortly before the final whistle to send Providence Park into a frenzy and the Timbers into a Western Conference playoff spot.

The Timbers continue their run of home games to finish the season next Sunday night against D.C. United on ESPN while SKC heads to Southern California to take on the Galaxy, also on Sunday.