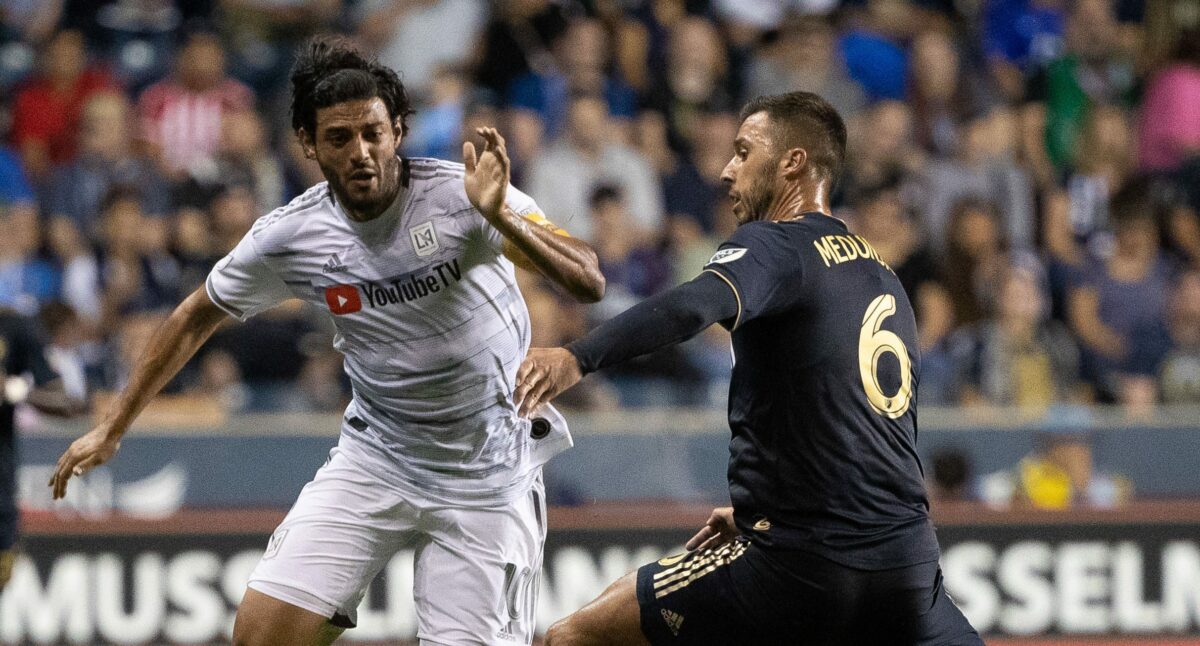 There was plenty of action across the seven MLS tilts on Saturday, headlined by the marquee matchup between Philadelphia Union and LAFC, who split the points in a 1-1 draw in Chester.

A wild six-goal affair in Orlando saw the Revs cling to a late equalizer to stay above the playoff line in the east, and the result leaves Orlando’s playoff hopes looking grim.

Saturday’s action kicked off at Yankee Stadium where the home team extended its unbeaten streak to seven and extended its lead atop the Eastern Conference.

The visitors struck first though, as the reigning MLS goal king Chris Wondolowski tapped one in at point-blank thanks to a run from Valeri Qazaishvili.

However, a pair of late first-half goals from Keaton Parks and Alexandru Mitrita would see NYCFC take the game back. Parks’ 40th-minute clean-up of a failed clearance by the Quakes backline marked the American youngster’s first-ever MLS goal.

Down but not out of the Eastern Conference playoff race, the Chicago Fire took care of business against FC Dallas at Seatgeek Stadium on Saturday afternoon.

A four-goal outburst in the first half decided the game. In the seventh minute, some miscommunication between Dallas keeper Jesse González and his backline saw C.J. Sapong pounce on the mistake in front of a wide-open net.

The mistake would be representative of how the rest of the afternoon played out for Dallas. Sapong grabbed another goal in the first half, and both Przemyslaw Frankowski and Nemanja Nikolic would earn goals as the scoreless second half saw out the win.

Looking to clinch its playoff appearance in front of the 68,000 strong at Mercedes-Benz Stadium, the moment was cheapened by a comeback win from the Columbus Crew, who avoided elimination with the victory.

Josef Martinez opened the scoring early when Pity Martinez found him in stride. The Venezualan’s touch was deflected in by the Crew’s backline for his 24th goal of the season.

The second half saw Atlanta unravel after Gyasi Zardes hit a rocket from a Luis Dias deflection.

Diaz would only have to wait a few moments before picking up a goal of his own. The strike came off his left foot from deep in the box, and Atlanta defender Miles Robinson sealed his team’s fate with a botched clearance in the closing moments that went into his own net.

Still in the hunt for an Eastern Conference, the Montreal Impact disappointed the home fans in attendance at Stade Saputo.

The visitors wasted no time in picking up the game’s only goal. MLS newcomer Allan Cruz earned his sixth goal on the campaign just 28 seconds into the match when he cleaned up a deflection in Montreal’s box.

Newly installed Cincy boss Ron Jans earned his first win with the team as they took the season sweep over Montreal.

A critical six-pointer between teams on opposite ends of the Eastern Conference playoff line saw Orlando City and New England Revolution split the points at Exploria Stadium.

An errant clearance from Orlando striker Tesho Akindele saw him put the ball past his own keeper, but Nani would get the goal back when he headed a corner in moments after. Revs forward Christian Penilla took the lead back after catching Orlando keeper Brian Rowe well off his line to close out the half.

Gustavo Bou had his team up 3-1 after fighting through traffic, but Dom Dwyer pulled it back moments later, and Nani had the final say when he shook off an Orlando defender to finish a shot from distance. The Revs weathered a late Orlando surge to snap a two-game winless skid.

The toast of the league, LAFC finds itself winless in its last four games after splitting points with Philadephia Union at Talen Energy Stadium.

The teams swapped goals in the first half and Kacper Przybylko put the Union on the board early thanks to a set-up from Fafa Picault. Przybylko earned his 14th goal on the season as he tucked a headed shot in behind LAFC keeper Tyler Miller.

They wouldn’t escape the first half with the lead though, in the 43rd minute Carlos Vela responded by taking advantage of a Mark-Anthony Kaye shot that came off the crossbar.

The bottom two teams of the Western Conference went back and forth at BC Place as Houston Dynamo saw it’s playoff hopes evaporate, though it was hard to imagine had they won.

It took until the 54th minute, but Hwang In-Boem broke the deadlock from the spot after a Mauro Manotas handball from a set-piece to give Vancouver the lead.

Manotas redeemed himself late though. Maynor Figueroa took a powerful shot from distance and the ball was left unattended after stinging the gloves of Whitecaps keeper Zac McMath and Manotas ran up for an easy tap-in.

After coming on in substitution, Fredy Montero eliminated Houston from playoff contention with a close-range strike in extra time.