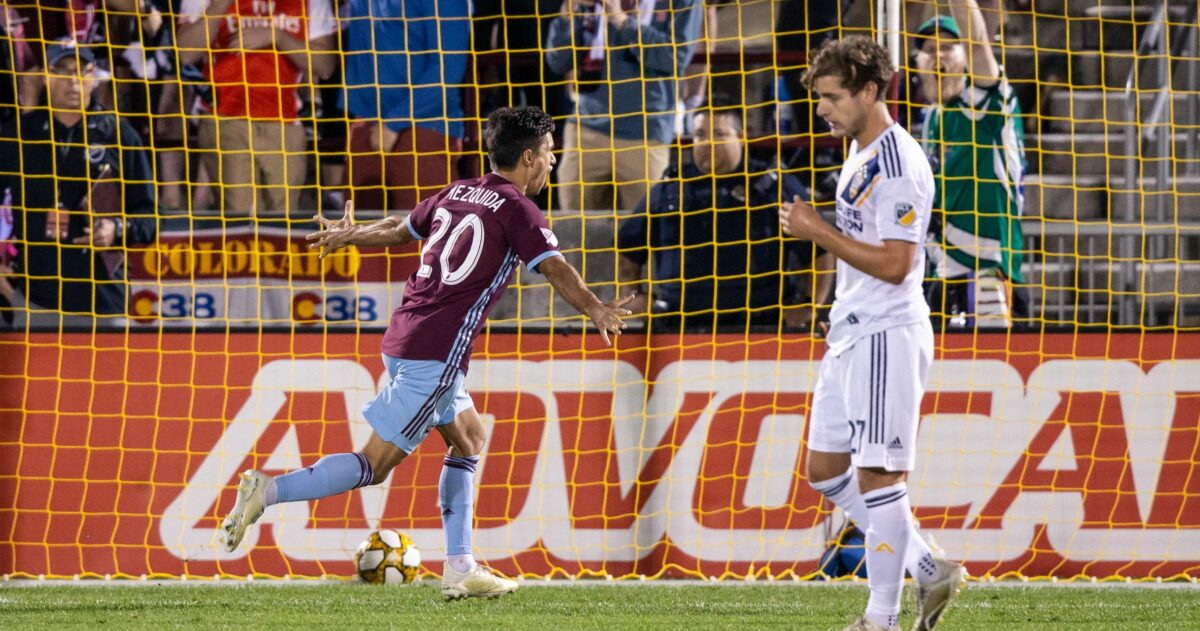 Several teams had chances to improve their playoff positions on Wednesday night, but only one managed to do so.

New York City FC had the first shot at extending their lead atop the Eastern Conference, but were fortunate to escape with a draw against Toronto FC. Elsewhere, the Colorado Rapids took another scalp as they look to play spoiler in the Western Conference playoff race by downing the Galaxy, who are suddenly on the outside looking in at the postseason.

Also. Real Salt Lake managed to get a big win over the San Jose Earthquakes, but Minnesota United faltered on their trip to Houston.

Here’s a rundown of all of the midweek MLS madness:

NYCFC couldn’t do much after a strong start and ended up sharing the points with visiting Toronto FC.

The hosts went in front in the sixth minute when Alexandru Mitrita banged home a free kick from just outside the 18 yard box. He would come close to doubling the lead with a long range effort over the bar at the 32 minute mark.

Both sides had a couple of nice chances in the second half, but none were better than Toronto’s in the 77th minute. VAR awarded them a penalty against Ben Sweat, who slid to block a cross that ended up hitting his extended arm. Sean Johnson, however, stepped up to deny Pozeulo’s attempt for a second goal and the game stayed tied.

NYCFC will stay home on Saturday and welcome the San Jose Earthquakes to town while Toronto FC will return to Canada and host the Colorado Rapids.

Minnesota United saw its playoff position take a hit after a 2-0 road loss to the Houston Dynamo.

It was a rough series of events late in the first half that sank Minnesota. Houston went in front in the 37th minute when DaMarcus Beasley hustled to a loose ball outside the penalty area and played a quick cross to Mauro Manotas for the emphatic finish. Manotas would turn provider seven minutes later when former Minnesota United forward Christian Ramirez doubled the lead in the 44th minute.

The Loons had their chances to equalize late in the game. Ethan Finlay thought he had scored late in regulation with a thunderous shot from the corner of the penalty area, but VAR called in back because Angelo Rodriguez was in an offside position right in front of goalkeeper Joe Willis. Finlay had another decent look in stoppage time, but had a shot blocked.

Minnesota United will look to get back on track after three losses in four games at home on Sunday against Real Salt Lake. Houston is still technically in the hunt for a Western Conference playoff spot and will hope to further revive themselves on Saturday night at the Vancouver Whitecaps.

The Colorado Rapids picked up another home win against a playoff contender in a bonkers finish against the LA Galaxy.

The match trudged along for 79 minutes before taking off for the final 11 minutes and what turned out to be an eternity of stoppage time. Cole Bassett smashed home the go-ahead goal for the Rapids off a set piece in the 79th minute, but the lead didn’t last long because Giancarlo Gonzalez equalized for the Galaxy three minutes later.

The Rapids found their winner from the penalty spot thanks to Nicolas Mezquida in the 85th minute, but the foul that set him up was rather dubious. Andre Shinyashiki went down near the goal, but the challenge was rather weak and Shinyashiki fell to the ground rather easily. The call stood up, however, allowing Mezquida to bury his spot kick.

That wasn’t all for the controversial action, however. Cristian Pavon looked to pick up a red card early in stoppage time for a swinging leg near the corner flag, but VAR stepped in to reverse the decision, saying he was kicking the ball and simply missed it. Several minutes later, Rolf Feltscher was kicked in the face on a diving header that just barely went wide of the goal. No call was given initially and VAR couldn’t overturn that decision, but that didn’t stop Feltscher from taking every chance he got to point out his soon-to-be black eye to referee Fotis Bazakas well past the final whistle in the 103rd minute.

The Rapids have now won two straight against Western Conference playoff contenders and move on to face Toronto FC on the road on Sunday. The Galaxy, who are now outside the playoffs out West, host Sporting Kansas City, also on Sunday.

Real Salt Lake jumped into second place in the Western Conference with a 1-0 smash-and-grab win over the San Jose Earthquakes.

The lone goal of the game came from Damir Kreilach in the 75th minute. Brooks Lennon picked him out in the center of the penalty area after a rather poor corner. That was one of five shots for a very active Kreilach.

RSL will probably feel like it should have scored more. San Jose keeper Daniel Vega was called upon to make several excellent saves in the second half and Kreilach had a solid chance on a 65th minute counterattack that didn’t miss by much.

The Earthquakes struggled to do much on the other end, taking only nine shots total on a night where they held a decent possession advantage overall. Only one truly tested Nick Rimando in goal and it came in the 12th minute.

Up next for surging Real Salt Lake is a trip to St. Paul to take on Minnesota United on Saturday. San Jose will hope to regain its strong form from earlier this year on Saturday against NYCFC at Yankee Stadium.