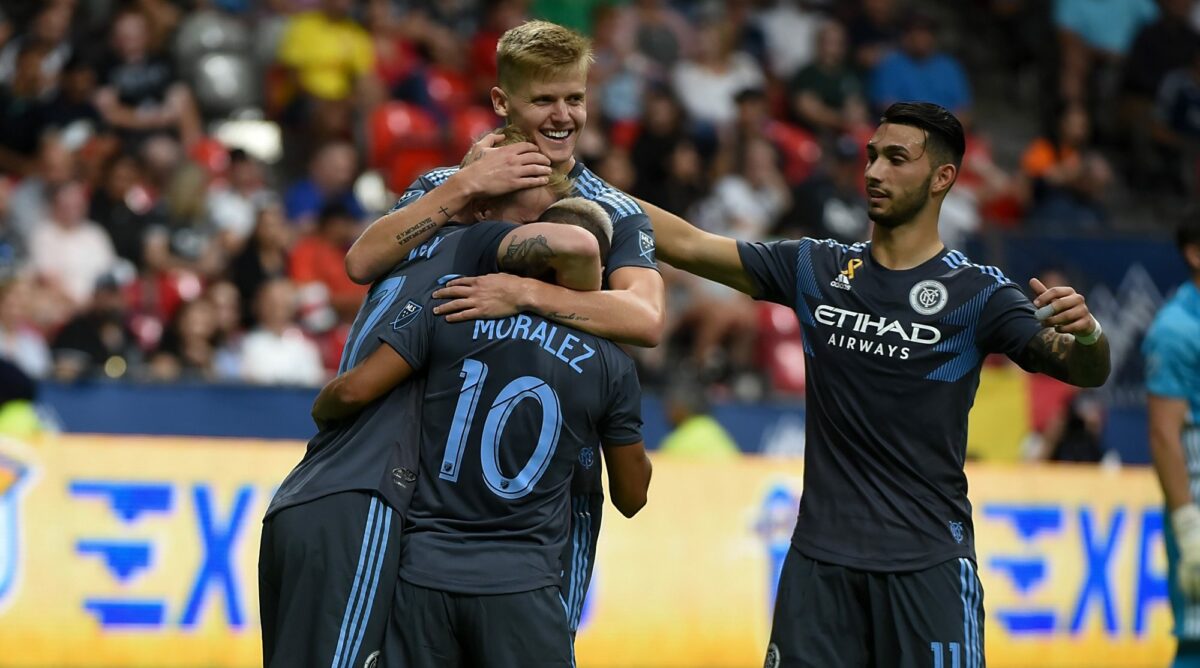 International fixtures may take centerstage this weekend, but Major League Soccer continues with 10 teams in action.

In an all-Eastern Conference affair, NYCFC takes on the New England Revolution at Yankee Stadium on Saturday afternoon. 11 points separate these sides in the East, with the Revolution currently sitting above the red line in the playoff race. Heber’s injury leaves NYCFC with a hole in attack, but Valentin Castellanos will look to lead the hosts. Gustavo Bou and Carles Gil look to counter the Revs.

NYCFC returns to Yankee Stadium for the first of a three-match homestand this month.

Domenec Torrent’s side are riding a four-match winning streak into this contest, which is the first of two meetings between these teams before the end of the season. Valentin Castellanos has scored in two of the team’s four wins, while Alexandru Mitrita will look to fill the gap left by the injured Heber.

New England are 1-1-3 in their last five matches, but are unbeaten in four straight. The Revs are above the red line right now, but need to start picking up wins in order to remain so. Gustavo Bou has scored in four-consecutive matches for Bruce Arena’s side and will be the man to watch for the visitors in this match.

Three points separate these sides with the Portland Timbers currently sitting just higher in the standings. A 1-0 success over Real Salt Lake last weekend snapped a two-match losing streak for Giovanni Savarese’s men. Diego Valeri has scored in the last two matches for Portland and will be eager to get after SKC, a side who has showed little consistency in 2019.

Peter Vermes’s side remain in the playoff race despite what has been a disappointing season. A three-match winning streak through has the visitors full of confidence, although Felipe Gutierrez and Johnny Russell will miss the match due to international duty. Yohan Croizet will be the man to watch with several of the team’s top scorers out.

Another all-West clash sees the Seattle Sounders pay a trip to the Colorado Rapids.

It will be the second of two meetings this season, after Seattle downed Colorado 2-0 back in March. Brian Schmetzer’s side are riding a three-match unbeaten run, but will be missing several starters due to the international break. Nicolas Lodeiro will be relied on to carry the playmaking load, while Harry Shipp could see a return to the starting XI.

Robin Fraser will aim to earn his first win as Rapids head coach this weekend after his side downed the New York Red Bulls 2-0 six days ago. Jonathan Lewis scored both goals and will be available this weekend after not being included into the USMNT. The Rapids will look to take advantage of Seattle missing several key starters due to international duty, so look for the hosts to be attack-minded at home.