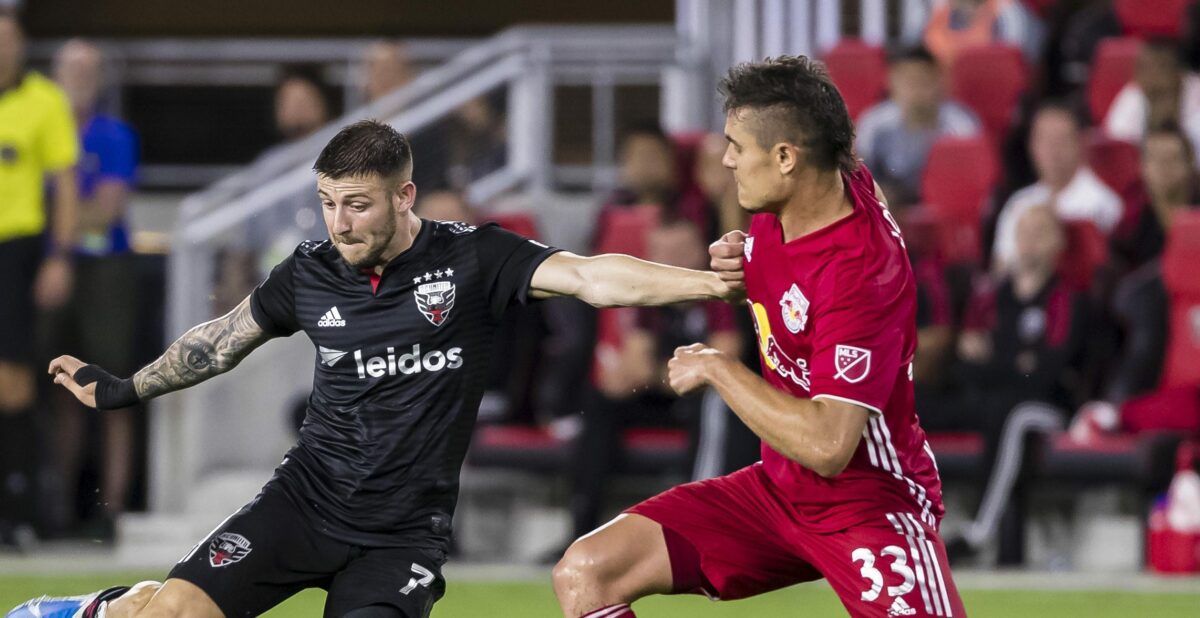 Heading into the final two weeks of the Major League Soccer regular season, four playoff places remain open for teams to aim for. Also up for grabs is the race for top four finishes in both conferences which will guarantee home matches in the playoffs.

One key match in MLS this weekend is the New York Red Bulls’ date with D.C. United in Harrison. Currently, the Black and Red are in fourth place but sit only a point clear of their East Coast rivals in the table. Both teams are coming off important home wins last weekend which makes things even more interesting in the race for the top four. Daniel Royer and Wayne Rooney headline the offensive attacks for both teams.

Elsewhere, LAFC and Minnesota United will square off in St. Paul while the Portland Timbers travel to Sporting KC. The Chicago Fire hosts Toronto FC still in search of the final playoff spot in the Eastern Conference. The Seattle Sounders face the San Jose Earthquakes in one of Sunday’s top Western Conference showdowns.

One point separates these East Coast rivals in the race for the top four.

The New York Red Bulls are in fifth place coming into Sunday’s showdown with D.C. United. Chris Armas’ side has won consecutive matches over the Portland Timbers and Philadelphia Union respectively, posting clean sheets in both. Kyle Duncan has played well at right back, registering one goal while Daniel Royer and Tom Barlow will look to lead the attack.

Ben Olsen’s side has won three straight matches coming into their trip to Red Bull Arena and will look to extend their lead in the East and secure a top four finish. Defensively, the D.C. backline has not conceded a goal in over 350 minutes and will be led by Frederic Brillant and Steve Birnbaum.

The top two teams in the West meet in St. Paul with bragging rights to play for.

Minnesota United downed LAFC earlier this season and are coming off a dramatic playoff-clinching win over Sporting KC on Wednesday. Hassani Dotson has been one of MLS’ top rookies this season and will look to follow-up on his goalscoring performance midweek.

LAFC lifted the Supporters Shield on Wednesday in front of its home supporters after downing the Houston Dynamo. Bob Bradley’s side has already clinched the top spot in the West, so it will be intriguing to see if the veteran head coach rests any stars for this contest.

The Portland Timbers are not safe yet in the playoff race and will need to earn something at eliminated Sporting KC on Sunday.

Giovanni Savarese’s side coughed up a two-goal lead late at Providence Park in midweek play and need to find their groove again if they want to be in the postseason. Diego Valeri and Jeremy Ebobisse will look to spark offensive chances against a SKC side with little to play for.

2019 has been a disappointing season for Peter Vermes’ side, but his side can play a spoiler role these last two matches. Gianluca Busio and Johnny Russell had good outings in Wednesday’s loss to Minnesota United and could help knock off Portland in KC.

The San Jose Earthquakes are now on the outside in the Western Conference and can’t afford any slip-ups, beginning with Sunday’s match against Seattle.

Matias Almeyda’s side lost to the Union on Wednesday and will feel they should’ve closed out the match better. Jackson Yueill stepped up on Wednesday, but the young midfielder will need some help if the Quakes want to get back above the red line heading into Decision Day

The Seattle Sounders are fourth now in the West and have lost two of their last four league matches. Consistency at this time of the season is key and Brian Schmetzer’s side is lacking it heading into the final two weekends. Nicolas Lodeiro is expected to return to the lineup and should bring a needed boost to Seattle’s attack.

The New England Revolution are the favorite to clinch the final playoff spot in the East and can do so with a win on Sunday.

Bruce Arena’s side scored a pair of late goals on Wednesday to earn a tie against the Portland Timbers. Gustavo Bou and Carles Gil’s partnership has continued to blossom this second-half of the season and the duo will continue to be important should the playoffs come knocking.

NYCFC can clinch the top spot in the East with a win on Saturday. A 4-1 beatdown of Atlanta United on Wednesday saw Alexandru Mitrita score a first-half hat trick and Heber return to the pitch with a goal. Dome Torrent’s side will be favored to continue their unbeaten streak in Foxborough.

(All matches are on Sunday)