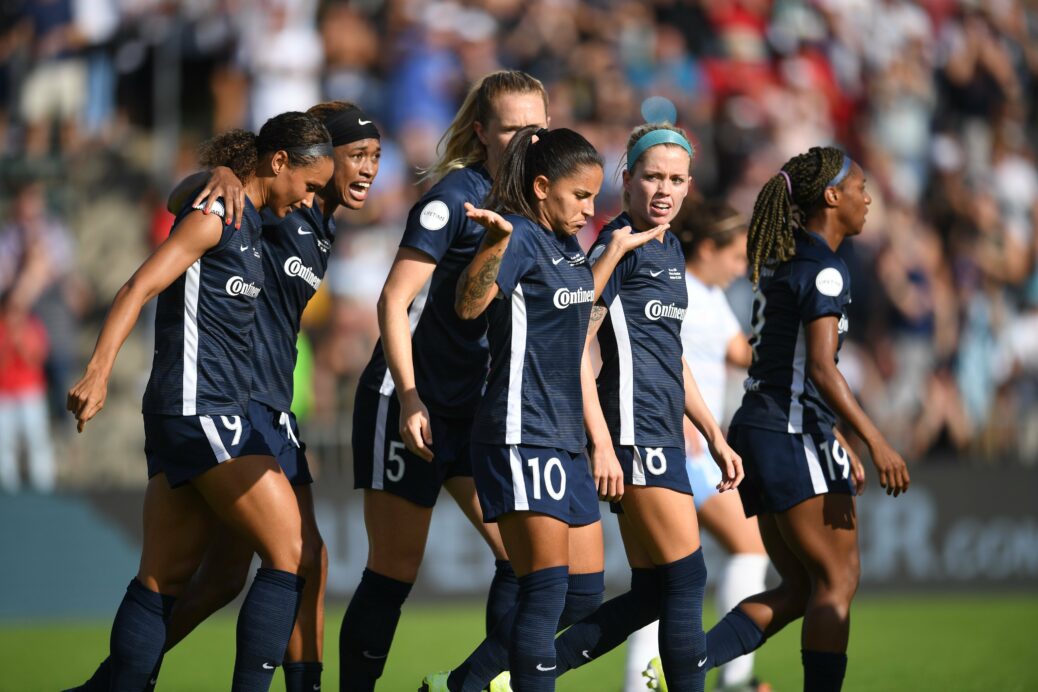 Home-field advantage played a part once again in this year’s National Women’s Soccer League postseason. After winning on home turf last week, finalists North Carolina Courage and the Chicago Red Stars did battle for hardware at sold-out Sahlen’s Stadium in Cary, North Carolina where the Courage went on to win by a margin of 4-0.

The scoring started early for North Carolina, as the typically reliable Debhina was cool in a chaotic moment in the fourth minute to put the opening goal past Red Stars’ keeper Alyssa Naeher, who initially made a save. At the mouth of the goal, the Brazilian took it back and fired it into the net with Naeher out of the equation.

Jessica McDonald doubled the lead in the 26th minute in the aftermath of a corner. She finished off a cross supplied by Lynn Williams, and poked a header past Naeher.

In first half extra time, Crystal Dunn got in on the scoring. She fought through traffic and found a way to embarrass the surrounding Red Stars shirts with a right-footed blast from a tight angle.

It would take until the 61st minute to see North Carolina put another in, and for the second time in the afternoon, Chicago wasn’t able to stay composed after initially clearing a corner attempt.

From deep in the field, Abby Dahlkemper exposed the Red Stars line with a dart to Samantha Mewis, who rose above and finished with authority with a header.

The afternoon marks the Courage’s second NWSL Championship in a row, and third-ever, dating back to the initial days of Western New York Flash,  which marks them as the league’s most successful franchise.

Too, the win finished off a third-straight supporters shield campaign.

With her team cruising on the offensive end, Courage keeper Stephanie Labbe only had to make two saves despite Chicago’s racking up of 13 shots. With all four goals coming from the feet of four different women, we’ll give credit to Labbe for keeping the clean sheet on NWSL’s biggest stage.

Dunn’s first half goal to see the Courage go into halftime with a 3-0 lead had the fans rocking.

She’d go on to get blanked in the match though, and that’ll be a disappointment for Chicago fans after seeing her have such a decorated season.