DORTMUND, Germany — When Josh Sargent arrives to the U.S. Men’s National Team camp next week, he will do so boasting something that no other forward in the entire player pool can.

Minutes in a top European league.

The start of the German Bundesliga season has been a positive one thus far for Sargent, as the 19-year-old striker has gotten consistent playing time for Werder Bremen in the early part of the season. What’s more, Sargent is not just making cameos off the bench. Rather, he is starting matches, getting the nod in three of the five league games he has appeared in to date and seeing the field for at least 80 minutes in each of those starts.

“I think it is important for my game,” Sargent told SBI at Signal Iduna Park following this past Saturday’s 2-2 draw with Borussia Dortmund. “It’s not easy. It’s definitely a step up from the U-17 and U-20 levels I’ve played before. Every game is a learning experience and I’m just trying to get used to the pace of play.”

Sargent has not been overwhelmingly impressive in the final third for a Werder Bremen team currently sitting in 11th place, but he has found way to make an impact on occasion. The young forward scored his lone goal thus far this season in a 3-2 home win over FC Augsburg in early September, and more recently delivered the equalizing assist in this past weekend’s surprise away draw with Dortmund via a flicked-on header.

His recent play should only help him further breakthrough in a Bremen squad that includes quality and experienced attackers like Claudio Pizarro and Yuya Osako. Sargent, however, admittedly has work to do to keep improving, including on the physical end.

On multiple occasions in the match vs. Dortmund, Sargent was taken out of plays by little bumps or tight marking from the opposing central defenders. He was most involved when he had space to run at and move in, primarily on the counter, and was far less a factor when there was slower build-up that required him to create room for himself in the penalty area.

“I think I learn from these types of things,” said Sargent. “Whether it’s small movements to avoid these battles or whatever it is, I think it’s just trying to learn and improve out there.”

Sargent does seem to be learning, as evidenced by his role in the tying goal this past weekend. The American broke free on a corner kick in the 55th minute, subtly faking as if he was going to drop to the back post on the set piece before making a darting run to the near post. The ball ended up coming his way, and he, having created just enough space with his movement, nodded it backwards to the back post for a close-range finish from Marco Friedl.

It was something so small but so significant, and what ultimately helped Bremen leave Dortmund’s intimidating home venue with a valuable point.

“I think every little thing is important for your confidence,” said Sargent. “Getting an assist definitely helped mine.” 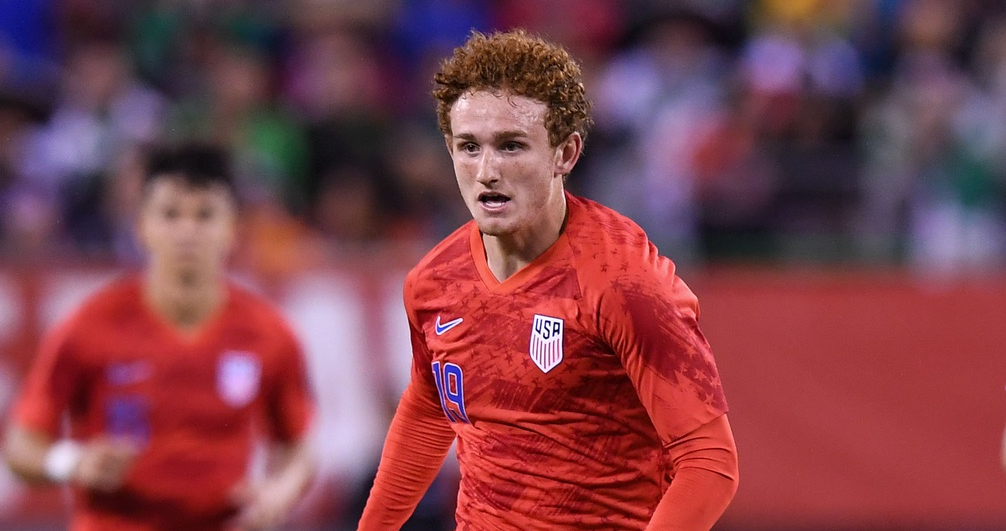 What has also helped his overall cause and ability to start the season so well is that he was able to train with Werder Bremen since the start of training camp in July. Sargent was controversially left off the USMNT‘s roster for the Concacaf Gold Cup this past summer, but it may have been a blessing in disguise that he was not with his compatriots for the regional tournament.

“Obviously at the beginning I was very upset and didn’t really understand for the first few days,” said Sargent of his Gold Cup omission. “But when I had time to think and calm down and kind of regroup with things, I was able to come into the preseason with a strong head.

“One hundred percent, I think it helped definitely being there the whole preseason.”

For Sargent, there is now one more league match, against Eintracht Frankfurt on Sunday, before his attention turns towards the USMNT. Sargent was included in the squad that was named for this month’s Concacaf Nations League matches vs. Cuba and Canada, and his recent run of form should help him compete for minutes with veteran forwards Jozy Altidore and Gyasi Zardes.

He may be significantly younger and less experienced than his teammates, but, make no mistake about it, Sargent is heading into camp with the idea of trying to earn minutes.

After all, his goal right now is to continue to earn playing time, both for club and for country.

“Of course I want to play as much as I can,” said Sargent. “I’ll keep fighting for that.”