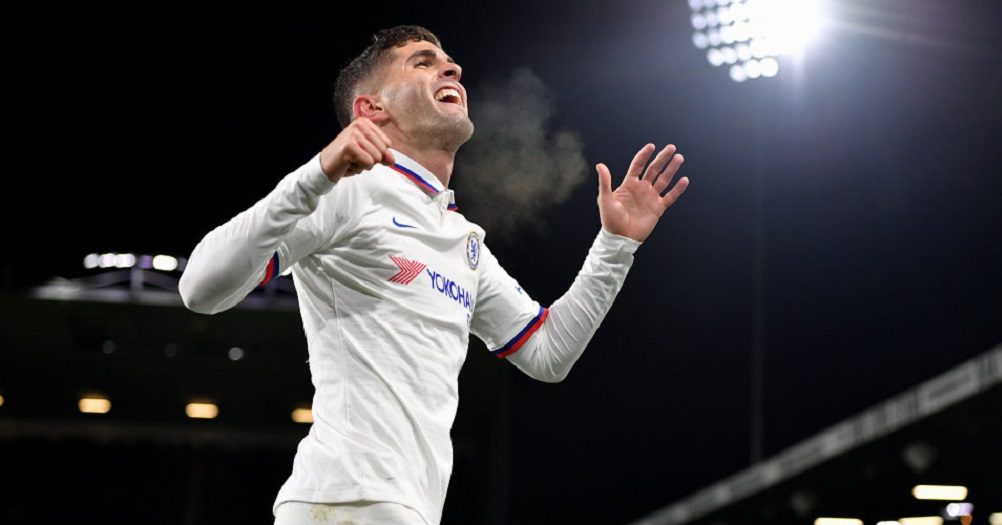 Christian Pulisic had more than just a breakout game on Saturday, he had the greatest game of his young career.

The 21-year-old American winger got his first start in the Premier League since August 31 when Chelsea visited Burnley and he ended up with a performance unlike any we’ve seen from an American in the English top flight.

Pulisic’s hat trick was only the second by an American player in the history of the league. Clint Dempsey was the other. He scored three for Fulham in January of 2012 when they took care of Newcastle by a 5-2 score.

Pulisic’s was arguably more impressive, however. For one, it was a “perfect” hat trick where he scored with his left foot, right foot, and a header. But the goals themselves were impressive as can be. His first two goals were remarkable individual efforts that started with long runs down the midfield and ended in well placed shots. The third was a result of excellent off-ball movement to get himself open off a broken down corner kick. It helped that Mason Mount delivered a perfect cross, but Pulisic had to get open at the top of the six-yard box in the first place.

While a hat trick is certainly monumental, even the first goal of the night clearly meant a lot to him. The look of relief and joy on his face as he slid in celebration told the entire story.

“It’s unreal,” Pulisic told Sky Sports after the match. “What a day for me. I’m even happier with the result. I wish we could have got a clean sheet but in the end that’s a special day for me.”

Pulisic also made history for his club. He became the youngest Chelsea player to ever score a hat trick at 21 years, 28 days old. His perfect hat trick as also the first for the Blues in the Premier League since Didier Drogba did in back in 2010.

The impressive efforts certainly impressed his manager. For the third time in eight days Frank Lampard heaped plenty of praise on Pulisic.

“I’m absolutely delighted for him,” Lampard said. “There’s been a lot of talk around Christian because of the big price tag, the fact he’s a star in his country and captain of the USA national team.”

Pulisic struggled to truly adapt to the Premier League. He only has four starts on the season and he didn’t really look all that impressive until last weekend’s win over Newcastle. Pulisic didn’t register an official assist in that game, but he did help set up the game winning goal. He followed that up with a true assist for the only goal in a 1-0 win at Ajax in the UEFA Champions League, which no doubt led to him getting the start on Saturday at Turf Moor.

Lampard says Pulisic’s busy summer where he took the U.S. Men’s National Team to the 2019 Concacaf Gold Cup Final contributed to the slower start, but he had a plan to deal with that all along.

“I’ve tried to deal with it in the way I see best, which is to give him minutes,” he said. “He has played games this season already but I’ve also got competition in that area and I need them all trying to perform when they get in the team. Christian has been doing that recently from the bench, he fully deserved his start today and it was a fantastic match-winning performance.

“I know what a good player he is because I see it close up every day. There are obviously things that he has to learn and improve because he’s just turned 21 and it’s the same as all the other young players, but he knows that and he knows I’m driving that daily in training.”

Pulisic’s performance showed exactly what he is capable of with a big club in one of the most competitive leagues in the world. He showed pace, passing accuracy, and movement as he created several chances for himself both with and without the ball. He had five total shots, four of them on target, to go along with the three goals and he completed 25 of his 31 pass attempts.

“When you talk about the Premier League, the one thing there is is physicality, particularly at places like Burnley. If he moves the ball so quickly like he can do, he can cause teams a lot of problems. It’s a great thing to watch when people have a balance like that.

“The first goal where he waits, then the stopover then moves away from the player, that sort of stuff is brilliant. I hope it gives him the confidence it should do. That’ll do him great going forward.”

It’s tough to say whether Pulisic will be the regular starter out wide for a Chelsea team with a lot of options on both wings. Mount, Pedro, Callum Hudson-Odoi and Willian are all talented wide players and they will make it difficult for Pulisic to earn consistent minutes. But if the 21-year-old keeps turning in performances like this one, and like the substitute performances like Ajax and Newcastle, Lampard will have to continue to find ways to get him in the starting eleven.