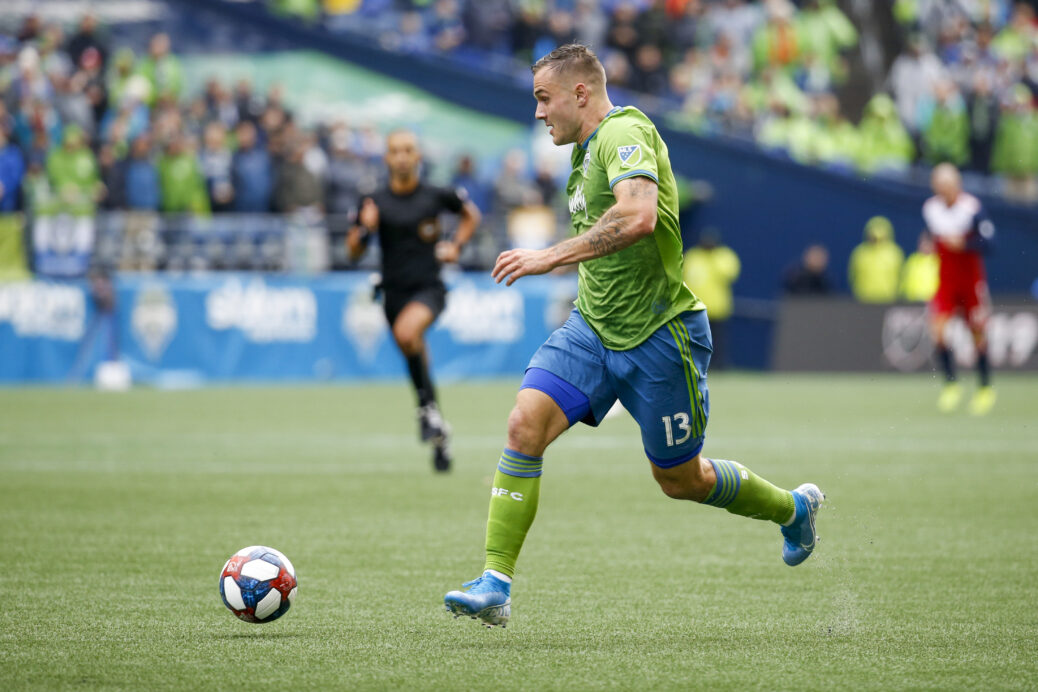 SEATTLE — It began in a downpour, finished in the sunshine, featured seven goals, a pair of blown leads, stunning saves, a hat trick, and a game-winning goal deep into extra time. It was one for the ages, and it ended with the Seattle Sounders besting FC Dallas 4-3 to advance to the Western Conference semifinals.

With the match tied 3-3 and looking likely to head to penalty kicks, Jordan Morris scored the game-winning goal in the 113th minute, heading a deflected Raul Ruidiaz shot off the FieldTurf and past goalkeeper Jesse Gonzalez. The buildup to the match’s seventh and final goal was — like the match itself — confused and confusing, ugly and terribly entertaining all at once.

The Sounders, the second seed in the conference, will host either the Portland Timbers or Real Salt Lake on Wednesday night at 7 p.m.

Despite advancing, the Sounders relinquished a two-goal lead for the third time in their last five home matches, and would not have eliminated FC Dallas but for a hat trick from an ascendent Morris and no fewer than five extra-time saves from goalkeeper Stefan Frei.

“I think this will take me a couple of days,” said Sounders head coach Brian Schmetzer, “to figure out exactly what we did well, but then also what we can be better at, and what we can learn from the game.”

The loss prematurely ends a promising season for a young FC Dallas side under new head coach Luchi Gonzalez. The visitors inarguably outplayed the Sounders over much if not all of the second half, but ultimately paid the price for ceding two early goals.

“I thought we played,” said Gonzalez after the match. “We expressed ourselves, we lived. We’re going to hurt in the short term, but in the long term I see growth and I see amazing potential in our human beings, in our locker room, and I’m looking forward to the future of working with this group and the staff.”

Ruidiaz opened the festivities in the 18th minute, putting the Sounders up 1-0 with an audacious shot from 30 yards out that skipped off the wet FieldTurf and past Gonzalez.

The goal forced the visitors to open up, and the Sounders took advantage almost immediately. Morris doubled the lead on the counter attack just four minutes later, running onto a Joevin Jones pass into space and sending a first-touch, left-footed shot past Gonzalez at the near post.

If you hadn’t watched the Sounders over the past six weeks — or much this season — you might have thought they were about to put the game to bed.

You would have been wrong.

Reggie Cannon, starting in midfield for the first time all season, pulled one back for the guests in the 39th minute, redirecting a deflected Michael Barrios cross past Frei.

“I think we need to a little bit better job handling that intensity, not letting the game get so open like we did,” said Morris.

The visitors opened the second half by mounting pressure on the hosts — a monster Gonzalez save against Nicolas Lodeiro notwithstanding. Matt Hedges equalized in the 64th minute, cleanly heading a Barrios corner kick past Frei to tie the match at 2-2.

“We sat back too much,” said Schmetzer. “It was like we were afraid to push out and defend.”

Morris restored the Sounders’ lead ten minutes later with his second goal of the match, toeing a Lodeiro corner kick over the goal line as he fell to the ground.

Up 3-2 with less than ten minutes to play, it seemed hard to believe the Sounders would relinquish the lead yet again, but Bryan Acosta indeed equalized for the visitors on an 82nd-minute corner kick. The Honduran designated player found himself completely unmarked at the back post and sent a header over Frei’s outstretched hands to silence a raucous crowd of 37,772.

FC Dallas looked certain to take the lead in the first 15 minutes of stoppage time, but Frei — that hero of the 2016 MLS Cup final — delivered time and again. The 33-year-old Swiss-American swatted away a Santiago Mosquera shot from distance in the 94th minute, denied Brandon Servania in the 96th minute with a leaping fingertip save, sprawled to deny Mosquera again in the 103rd minute, and came up with a stellar reaction save on a nastily deflected Servania shot in the 106th minute.

“I’d rather have our goalkeeper than any other goalkeeper in the league,” said Schmetzer. “I’ve said that from day one.”

All those saves set up the heroics from Morris.

“It’s all about the team winning,” Morris said when asked about his feelings after scoring his third goal of the day, “and just me doing my part to help the team win. So for me the first thought was, ‘We gotta finish this game out, [we] don’t want to go to PKs. But it was an amazing feeling.”

Jordan Morris. Who else could it be? In his fourth MLS season the hometown kid is putting it all together.

Jesse Gonzalez. Delivered some big saves later in the match, but could have done better on the Sounders’ first — and possibly second — goal.