Who should the USMNT start against Cuba?

The first match of the U.S. Men’ National Team’s foray into Concacaf Nations League is a tricky proposition. Not because Cuba is a big threat, but because Gregg Berhalter will need to navigate the first match while also considering the next match, just four days later against Canada.

The days of saying the USMNT can overlook an underdog opponent disappeared on THAT fateful day in the Caribbean two years ago, but as much as Berhalter will talk about respecting Cuba and not overlooking the tiny rival, the reality is the USMNT is more likely to deploy a stronger lineup against Canada than on Friday against Cuba.

Why? For starters, Canada won’t be playing on Friday, and facing a rested Canada with a tired squad could be a recipe for disaster. Secondly, there are some key USMNT players who Berhalter isn’t likely to want to give two starts, such as older players Michael Bradley and Tim Ream, and DeAndre Yedlin, who played his first full match in more than five months on Sunday.

Does that mean Berhalter will deploy a full-blown second unit against Cuba, like he did against Panama in the Gold Cup group stage in June? That may be an extreme the Americans can’t afford given the reality that goal difference could play a part in which team wins the Nations League group.

There is also the reality that some players, namely Christian Pulisic, can use the minutes, so the Chelsea winger should be the first name on Berhalter’s team sheet for both matches this month.

So what will the USMNT lineup look like on Friday against Cuba? Here’s a look at the lineup we could see: 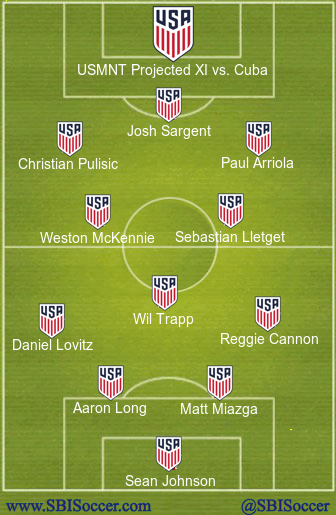 Zack Steffen isn’t likely to feature in both Nations League matches, leaving the Cuba clash a good opportunity for Berhalter to turn to Sean Johnson, who has established himself as Berhalter’s number two in goal. Brad Guzan is another option, but Johnson should get the nod.

Steffen didn’t take part in full training this week, increasing the likelihood that Johnson or Guzan will get the nod against Cuba, though Berhalter stated that Steffen is healthy.

Reggie Cannon should continue his run as the starting right back against Cuba, but look for DeAndre Yedlin to step in against Canada. At left back, Nick Lima is a good candidate to start, though Daniel Lovitz has been high on Berhalter’s depth chart. We could see Lovitz against Cuba, with Lima earning the look against Canada.

In central defense, Aaron Long is a player who has shown himself to have the stamina to handle heavy minutes, so he could be one of the few players who starts in both matches. A Long-Matt Miazga tandem makes sense against Cuba, with Ream stepping in next to Long against Canada.

Michael Bradley is a safe bet to start against Canada, but Berhalter should turn to Will Trapp in the defensive midfield role against Cuba. Jackson Yueill is another possibility, but Trapp should get the nod.

At the number 10 roles, the Sebastian Lletget-Cristian Roldan tandem looked good against Uruguay and could get another run, unless Berhalter decides Weston McKennie is another player capable of starting in both matches. If he does, then a McKennie-Lletget tandem works against Cuba, while a McKennie-Roldan airing would be a good bet against Canada.

Pulisic should hold down the left wing role in both matches, though we can expect his minutes to be limited against Cuba if the USMNT can put up a good number of goals. That could open the door for Tyler Boyd to get some minutes working on that wing.

On the right wing, Jordan Morris has established himself as a good option, but Berhalter could be tempted to start Paul Arriola against Cuba, leaving a fresh Morris to face Canada.

At striker, Jozy Altidore’s absence leaves the job up to Josh Sargent and Gyasi Zardes. Berhalter could decide he wants Zardes’ experience and defensive work rate against Canada, which would leave Sargent to lead the line against Cuba. That said, Berhalter should be tempted to give Sargent some invaluable experience on the road against a tough opponent in Canada to help continue his growth as a key part of the USMNT’s future. (UPDATE- Berhalter said on Thursday that Sargent would start against Cuba).

Look for Berhalter to start Sargent against Cuba, and if he lights it up as he very well could, then we could see Berhalter stick with Sargent for the big showdown against Canada.

What do you think of this projected lineup? Who would you like to see start against Cuba?