Who should the USMNT start vs. Canada?

With the much easier of the two Nations League tests out of the way, the U.S. Men’s National Team is now focused on Tuesday’s match against Canada, and the lineup capable of dismantling the neighbors to the north.

Gregg Berhalter didn’t come out and say it, but he clearly rested some players with an eye towards saving them for the Canada match, with Zack Steffen heading that list and Aaron Long also a member.

Much of the attack that rolled over Cuba should be the same group that faces the Canadians, led by Christian Pulisic.

Here is the lineup we could see face Canada on Tuesday: 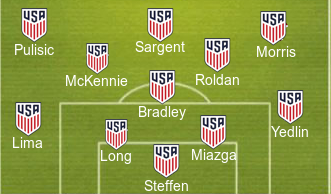 Zack Steffen should get the nod after being rested for the Cuba match. His outstanding form over the past month should have him locked in on Tuesday.

Berhalter should make wholesale changes to his back-line, with Aaron Long a good bet to anchor the central defense. Miles Robinson would have been a good option but was forced out by a hamstring injury. That means either Matt Miazga or Tim Ream will need to turn in a second straight start. Miazga is the better bet as the younger option.

At right back, Reggie Cannon has made five straight starts but it’s a safe bet Berhalter will give DeAndre Yedlin the nod. Canada’s speed in attack will be tough to deal with, but Yedlin has the speed and experience to handle that challenge.

Left back should go to Nick Lima, who has spent much of 2019 playing as a left back for the San Jose Earthquakes. A natural right back, Lima has the speed and defensive quality to fill the role well. Daniel Lovitz is the other option, but he was underwhelming against Cuba, leaving you to wonder just how much longer he will be a regular call-up.

Michael Bradley should anchor the midfield in the defensive midfield role after being rested against Cuba. Jackson Yueill got the nod against Cuba, and is clearly a prospect Berhalter rates, but Bradley’s experience will be key in a tough test on the road against Canada.

Weston McKennie had a monster game against Cuba, and did it in just 45 minutes, so he’ll be rested and ready to go against Canada as one of the attacking midfielders. Berhalter has several options to partner with McKennie, including the option of deploying Pulisic next to McKennie. We saw Pulisic in a central role in the second half against Cuba, and Berhalter could decide to put pressure on the heart of Canada’s midfield with Pulisic’s quick dribbles and incisive passing.

If Berhalter sticks with Pulisic as a winger, then he will need to choose between Cristian Roldan and Sebastian Lletget for the number 10 role next to McKennie. Roldan started against Cuba and should get the nod again.

Pulisic should start on the left wing, while Jordan Morris is a good bet to start on the right wing once again after his standout performance against Cuba. Morris has been in good form for both club and country, and his speed should cause problems for Canada’s defense.

At striker, Josh Sargent had a solid outing against Cuba and could earn the nod once again. Berhalter could decide to turn to Gyasi Zardes due to his edge in experience, and if the minor knock Sargent suffered on his ankle against Cuba becomes more of an issue.

If he’s healthy, Sargent should get the nod.

What do you think of this projected lineup? Who would you like to see start against Canada?