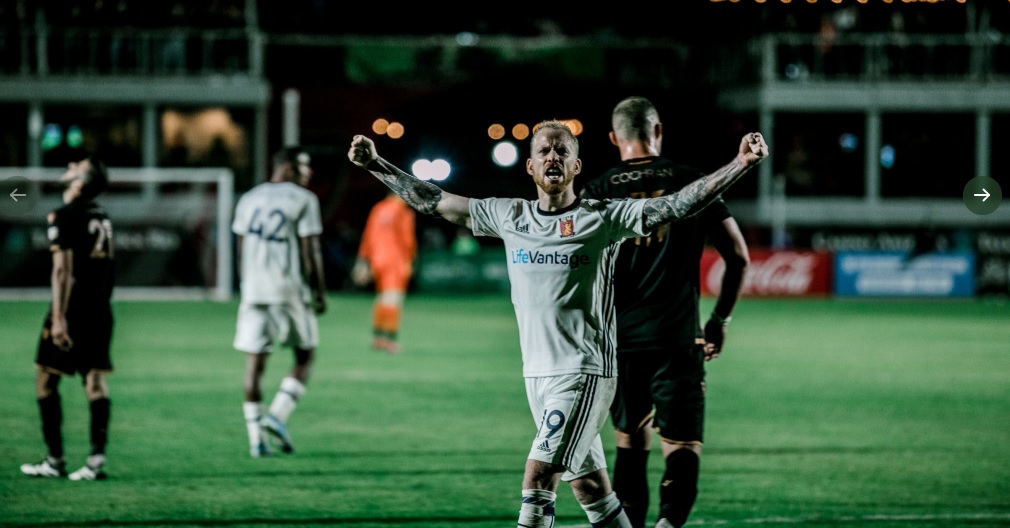 The chase for the USL Cup is down to four teams after another weekend of playoff action in America’s second division.

The Conference Semifinals got started with the best team in the league getting ousted on Friday night. Real Monarchs SLC traveled to the Arizona desert and upset Phoenix Rising on the road.

On Saturday, the two-time defending champions came from behind to keep their quest for a three-peat alive, Indy Eleven went on the road to down Nashville, and El Paso held serve at home against Sacramento.

Here’s a rundown of all the weekend’s USL Playoff action:

Phoenix Rising had the best record in the entire USL in the regular season and at one point set an American soccer record by winning 20 consecutive games, but it all went for nothing thanks to the Monarchs, who won for the second time in three weeks in Scottsdale, Arizona.

It looked like Phoenix would cruise to victory early on. Junior Flemmings put them in front to cap off a well executed counter attack in the 25th minute, but that would sum up their goal scoring. The Monarchs would hit back twice before halftime through captain Jack Blake in the 33rd minute and Maikel Chang in the 43rd.

Phoenix did their best to find an equalizer in the second half. Their best chance came in the 75th minute when Joseph Farrell saw the ball fall to him in the center of the six yard box with nothing but a gaping net in front of him. The ball careened off his knee, however, and flew harmlessly over the crossbar.

The Monarchs will move on to face El Paso Locomotive in the Western Conference Final at home next weekend.

Two time defending champions Louisville City stayed alive in the playoffs despite going down early on.

The Riverhounds got on the board early thanks to an 11th minute corner that found Thomas Vancaeyezeele’s head at the near post. Although they didn’t score again in the first half, they did force a couple nice saves out of Louisville keeper Chris Hubbard. The best of them came just before the break when Neco Brett launched one from long distance that called for a diving save.

Louisville was able to get on the level early in the second half with their first shot on target of the game. Luke Spencer scored on a sliding shot around a Riverhounds defender from near the penalty spot in the 51st. Neither team would produce a real chance after that and the game headed for extra time.

The visitors had a great chance of the bonus action when they trickled a shot off the post just after the second half of extra time began. They did get their winner near the end, however. Pablo Delpiccolo found it in the 188th minute to keep Louisville’s quest for a third straight title alive.

Louisville stays on the road in the conference final, travelling to face Indy Eleven.

Indy Eleven move on after surviving a scrappy test on the road in Nashville, who fell in their final game before joining Major League Soccer next year.

The first half of this one was rather chippy. Three yellow cards were handed out with two of them coming in the 24th minute when the teams came together in a hockey-like scrum. There were, however, no goals in the opening frame, despite a few decent looks from Indy.

The teams cleaned up their act in the second half and Indy went in front just before the hour mark with a wonderful long pass from Tyler Gibson. His bomb picked out Tyler Pasher behind the Nashville line and he made no mistake banking his shot in off the post. The closest Nashville came to getting even came in the 89th minute. Justin Davis thought he collected a through pass before burying a shot, but he was thwarted by the offside flag, allowing Indy to hang on and advance.

Indy will return home next weekend, where they will host Louisville City with all the Eastern Conference marbles on the line.

One home side was able to win in this round, and it was El Paso Locomotive taking down future MLS opposition in the Sacramento Republic.

El Paso controlled the opening 45 minutes and they were rewarded with a goal off a set piece in the 40th minute. James Kiffe took a free kick from about 30 yards out and floated it perfectly into the penalty area. Aaron Gomez rose to get a head on it and flick it into the back of the net for the opening goal.

Sacramento certainly had the opportunities for an equalizer in the second half while El Paso were content defending their one goal lead. The Republic found themselves with a series of open shots from dangerous areas around the hour mark, but inaccuracy, bad deflections, and even one clearance off the line kept them a goal behind. Their best chances came in the 79th and 80th minutes when Jordan McCrary blasted a shot off the crossbar and Cameron Iwasa forced a fingertip save from El Paso keeper Logan Ketterer.

El Paso was able to get their insurance goal in the 83rd minute. Dekel Keinan took down Omar Salgado in the penalty area and Sebastian Contreras made no mistake in burying the spot kick. Velazquez added one more with a fantastic shot to seal the deal in the 88th.

The Locomotive advance to the Western Conference Final, where they will travel to Utah to take on Real Monarchs SLC next Saturday.