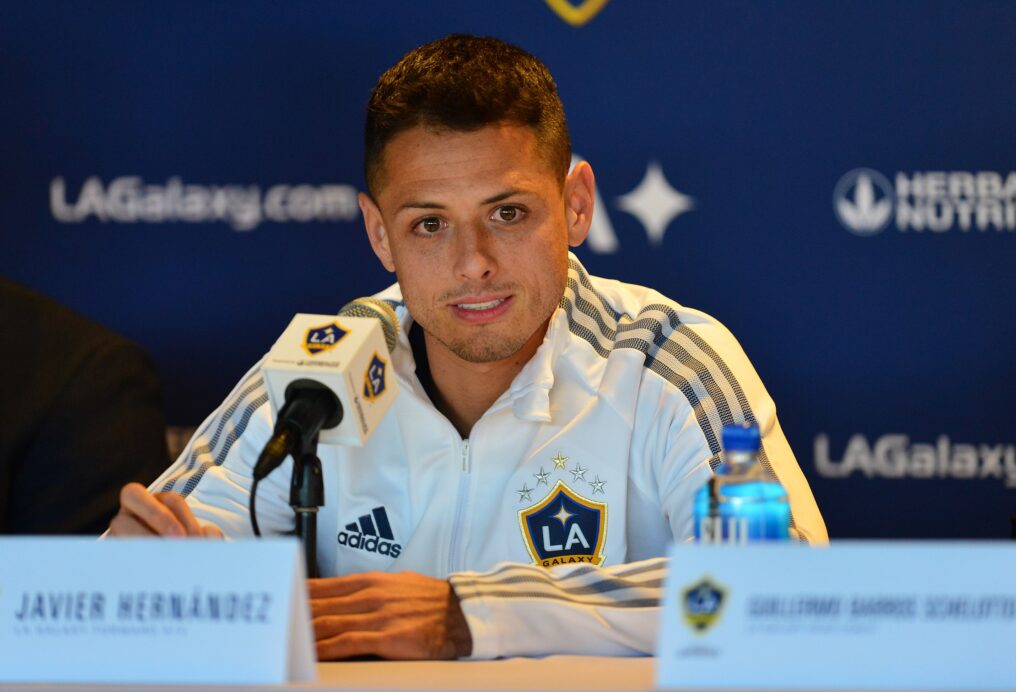 The LA Galaxy have been synonymous with stars and championships almost since their inception.

Their newest signing provides the latest example of the former, and is hoping to bring the latter.

The Galaxy publicly announced the high-profile arrival of Javier ‘Chicharito’ Hernandez on Thursday afternoon, adding the striker as a Designated Player on a three-year contract with an option for a fourth. The move is reportedly going to make the 31-year-old Mexican the highest paid player in MLS, and that, combined with the warm treatment he has received in his first few days in Los Angeles, has him more than grateful and ready to deliver for the team that has given him so much so quickly.

“The only thing I need to do is enjoy it and give the confidence back and try to score as many goals I can,” said Hernandez. “Like I’ve always said, I (may) score 20 goals, 15 goals, 10 goals, but doing very good performances and helping this club to get to a championship (is the goal). Because if not, it’s just very selfish coming here, getting my goals, getting my attention and then I leave.

“That’s never going to happen in my point of view.”

Coming off an unsuccessful stint at Spanish club Sevilla in which he did not see the field as much as he would have liked, Hernandez has arrived in LA motivated to play and score regularly again. The forward still believes he has plenty to offer, and wants to showcase that in order to join the list of big names like David Beckham, Landon Donovan, and Jorge Campos that have enjoyed memorable stays with the Galaxy.

The allure of becoming that type of player for a franchise that has been so successful combined with the Galaxy’s serious interest in acquiring him and their lucrative contract offer is why Chicharito made the decision to move to MLS in the first place. Yes, it likely has signaled the end of his time in Europe, but he felt the timing was right and the opportunity too good to pass up on.

“Speaking about the effort that they did to bring me speaks about that value and that respect and that admiration that they have in me and the confidence, especially, so why not take this opportunity,” Hernandez asked rhetorically. “My point of view it’s a win, win, win, win (situation), and every time I’m going to be on the pitch — if I keep working hard for the club, for the team — I’m going to be doing what I’ve been loving since I was in the belly of my mother.

Hernandez will have his work cut out for him, though. He is not only replacing the big shoes of polarizing superstar Zlatan Ibrahimovic — who never delivered a title but scored goals in bunches during his two-season stay — but is also joining a team that has not made a deep run in the playoffs since winning their last MLS Cup in 2014.

What’s more, the 2018 arrival of cross-town rival LAFC has given the Galaxy a worthy competitor in the LA market — not only in terms of results on the field but also off of it with regards to fan interest and media attention. The Galaxy are banking on Hernandez to do more than just score goals and help win games, especially given the large Mexican community that exists in Los Angeles.

There is also the matter of dispelling the notion that he has joined MLS to start the beginning phases of his retirement, which he stated was the case in a vlog that was released on Wednesday in the aftermath of him signing with the Galaxy.

“…We’ll see how long it’s going to be. Hopefully that beginning is going to last so long.”

Regardless of if it does or not, both the Galaxy and Hernandez are hoping his time in Los Angeles ends fruitfully. A big investment has been made in the popular attacker, and neither side wants to experience a letdown.

Especially not Hernandez himself.

“What excuse am I going to have to not deliver?”