Miazga to miss “significant amount of time” with ankle injury 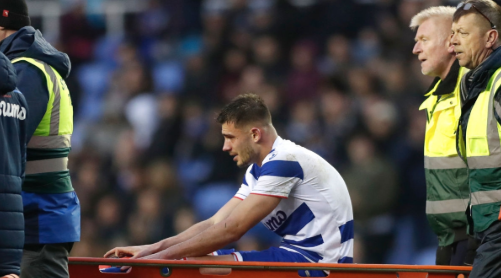 Matt Miazga is set for a lengthy spell on the sidelines.

The Reading defender has been diagnosed with a grade two ligament tear in his ankle after being stretchered off in Saturday’s 2-2 FA Cup draw with Cardiff City.

Miazga captained the Royals at the Madejski Stadium against the Bluebirds, but left in the 66th minute of the match. The Chelsea loanee was not in the 18-man squad on Tuesday for Reading’s 1-0 loss to Bristol City and Royals boss Mark Bowen confirmed Miazga’s injury post match.

“Miazga has a grade two tear – he’ll be out for a significant amount of time,” Mark Bowen said.

The 24-year-old joined the Royals on a season-long loan back in August, his second-consecutive stint with the EFL Championship side. He’s made 18 appearances in all competitions, while also captaining the team twice in FA Cup play.

Miazga also scored his first goal for the club back in October, a game-winner  against Preston North End in a 1-0 victory.

With Miazga now set for a lengthy spell on the sidelines, it is likely he will not be included in the U.S. Men’s National Team friendlies this March. Gregg Berhalter’s side face the Netherlands in Amsterdam on March 26th before visiting Wales in Cardiff on March 30th.

After making only four appearances for the USMNT from 2015-17′, Miazga has totaled 14 caps over the last two years.

Reading are currently 15th in the EFL Championship table with 37 points from 29 matches. The club are 11 points from the relegation zone, but remain 10 points out of the final playoff spot.

Up next for the Royals are back-to-back trips to Cardiff City in both league and cup play.