Inter Miami Notes: Alonso expecting to have three DPs before season, and more 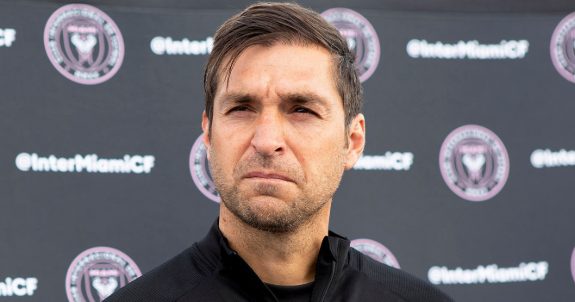 FORT LAUDERDALE, Fla. — Inter Miami’s second Designated Player is expected to be on his way in the very near future.

So too is a third.

Nineteen days are all that separate Inter Miami from the start of its MLS expansion season, and the team is confident in that being enough time to make good on the promise of having all three DP slots filled before its first match.

Inter Miami is reportedly on the brink of signing Mexican playmaker Rodolfo Pizarro as the second DP after paying his transfer fee late on Tuesday, and there is optimism that another will soon follow.

“We still have two Designated Players that we can bring over, and they will be here surely,” said Inter Miami head coach Diego Alonso in Spanish earlier this week. “We’re working on it and we have ideas as to who they are, but as I have said I don’t talk about soccer players that are not here presently. I’m the coach and what I do is talk about the soccer players that I train and that I work with.”

Implementation of style a work in progress

Head coaches tend to talk about implementing an exciting and proactive style of play when they first arrive on the scene, and that is especially true when it comes to MLS expansion teams.

Inter Miami has been no different in that regard, though the team readily acknowledged this week that the implementation process of its preferred tactics will be a work in progress that lasts more than a month into the season.

“The team understands the ideas more and gets more used to our way of training and our way of playing as the days go by, but of course it’s a process,” said Alonso in Spanish. “We’re all very anxious, but when we start playing it will take until Matchday 5 or 6 until we really know the flaws that we have and how we can fix them and how to reconstruct the team based on our flaws.

“A lot of times you train a team how you want to see them play, but at the same time there are flaws that will present themselves along the way. The only way to fix them is to see them. We won’t know them before we start playing.”

By most accounts, what Inter Miami is currently working on is a traditional South American style that emphasizes building out of the back, keeping the ball on the ground and creating chances through third-man combinations and runs in behind. Inter Miami is also prioritizing maintaining possession to tire out opponents, and as such there is a premium on clean touches and fluid play.

Even goalkeepers like Luis Robles and John McCarthy have been seen doing numerous footwork drills this week during the brief parts of practice that have been open to the media.

“Diego asks us for good treatment of the ball and to be protagonists in all of our lines and to pin our opponent in their half,” said centerback Nico Figal in Spanish. “It’s also about having a winning mentality. We’ve all come here for a dream and an objective and we need to be very committed in order to achieve that.”

Of course, Inter Miami is not just working on the attacking side of the ball. The expansion franchise is also rehearsing defensive details with regards to its pressure and shape.

“When the ball turns over, we want to win it back as quickly as possible and doing that in a very aggressive, intense way that’s also controlled,” said central midfielder Wil Trapp.

There has been a sizable body count during each day of training thus far this week, and that is because some players that are set to sign with Inter Miami’s USL League One side are taking part in practice.

Several unidentified players, including one goalkeeper, that will play for Fort Lauderdale CF this season have been involved in Inter Miami’s preseason sessions this week. Like the MLS contingent, the USL players are readying for the start of their campaign, which begins on March 27 with a home game against Union Omaha.

Rather than announce player signings individually, Fort Lauderdale CF is expecting to publicly reveal the bulk of its roster at once in the near future.