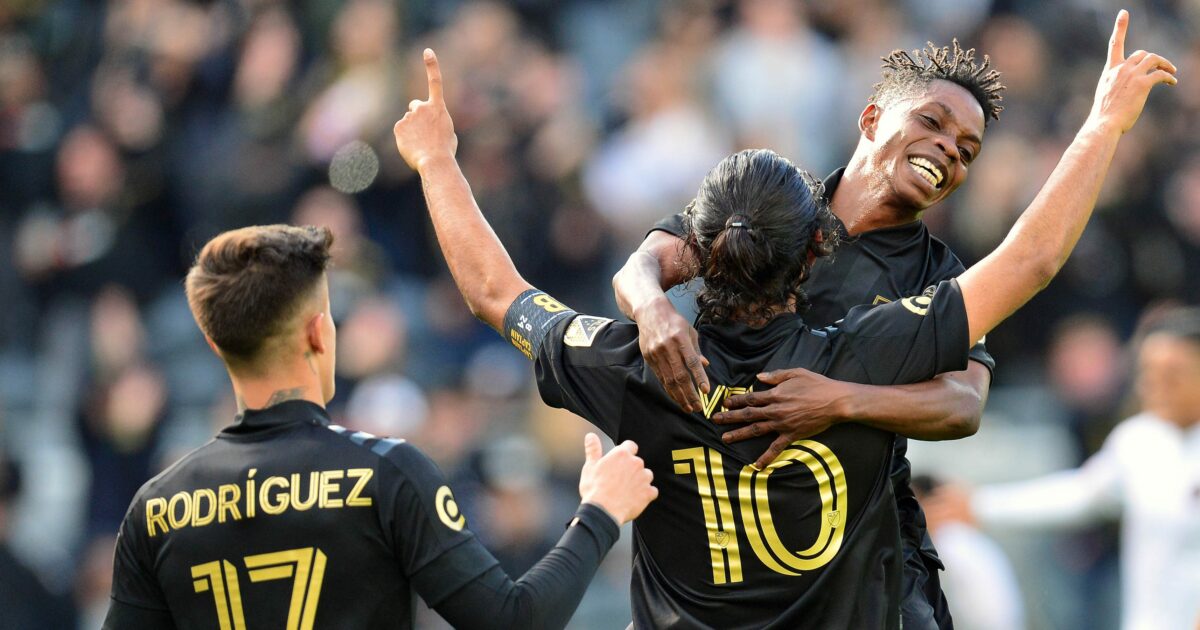 The first weekend of the 2020 MLS season rolls on this Sunday with five matches throughout the afternoon and evening.

The Columbus Crew started things off with a hard fought victory over 10-man New York City FC at MAPFRE Stadium. LAFC, in their first MLS home game of the year, took down Inter Miami in their inaugural match thanks to a Carlos Vela goal.

Elsewhere, the Red Bulls had to grind one out against FC Cincinnati, the Sounders had to come back from a goal down against the Chicago Fire.

The weekend concludes with the Portland Timbers hosting Minnesota United at Providence Park.

Inter Miami learned up close and personal what the rest of the league already knows: Carlos Vela is that good.

Vela celebrated his 31st birthday in style on Sunday afternoon, scoring a sensational goal to give LAFC a 1-0 victory vs. expansion side Inter Miami in their season opener. Vela’s winner came a minute before halftime, as he dribbled by a number of defenders before delicately lofting a shot over goalkeeper Luis Robles.

Robles was called on quite a bit by Inter Miami, as LAFC finished the match with nine shots on target. Vela, Diego Rossi, and Brian Rodriguez were heavily involved, combining for 20 shots and taking all of the ones that were on frame.

Inter Miami had its best chances to open the scoring midway through the first half, including on a Matias Pellegrini effort that was pushed away by LAFC goalkeeper Kenneth Vermeer and a close-range header by Nico Figal. Neither broke the deadlock, however, and Vela then provided his moment of magic to make the difference.

LAFC heads east to face the Philadelphia Union on the road next Sunday night while Inter Miami visits D.C. United in our nation’s capital on Saturday afternoon.

After raising a championship banner for the second time in four years, the Seattle Sounders rallied to a 2-1 victory over the Chicago Fire at CenturyLink Field on Sunday afternoon.

Halftime substitute Jordan Morris scored both goals for the hosts, including a dramatic go-ahead goal in stoppage time. Cristian Roldan assisted on both goals.

With the game tied 1-1 in the 92nd minute, Roldan headed Joao Paulo’s corner kick toward the far post, where a waiting Morris in turn headed the game-winner past goalkeeper Kenneth Kronholm.

Robert Beric, one of the Fire’s three new designated players, opened the scoring in the 46th minute, easily finishing just inside the near post after Djordje Mihailovic redirected a long ball over the top from Alvaro Medran.

Morris equalized for the Sounders in the 62nd minute, rifling a first-touch shot past Kronholm off a cross from Roldan.

Roldan appeared to have equalized off a Morris assist minutes earlier, but after video review Morris was ruled offside earlier in the play.

Miguel Ibarra had a nightmare of an afternoon in front of goal, putting two point blank opportunities off-frame, and sending a third directly to Kronholm.

The Fire have a road game next Saturday against the New England Revolution while Seattle hosts the Columbus Crew late Saturday night.

Two quick goals late in the second half were enough for Minnesota to score a huge opening night win at Providence Park in Portland. Luis Amarilla scored the winner in the 77th and Kevin Molino bagged his second of the night two minutes later to put it away.

Neither side scored in the first half, but Minnesota got the ball rolling against the run of play early in the second half. The Timbers were controlling possession, but left themselves vulnerable to a counterattack in the 51st minute. Ethan Finlay started the break and he managed to pick out a streaking Kevin Molino. Goalkeeper Steve Clark came off his line, but couldn’t stop Molino from tapping into the empty net.

The lead wouldn’t last long, though. Ike Opara tripped Felipe Mora on the edge of the penalty area, giving Diego Valeri the opportunity to equalize from the penalty spot in the 56th minute.

The Loons were able to keep their counterattacking game strong while playing stout defense. As Portland pressed forward, Minnesota was able to catch them short-handed at the back, leading to both of the late goals.

The Timbers will lick their wounds before welcoming in Nashville SC to Providence Park next Sunday night while Minnesota United heads down the Pacific Coast to take on the San Jose Earthquakes on Saturday.

New York City FC was down to ten players for the overwhelming majority of this match and they couldn’t keep Columbus off the board despite a valiant defensive effort.

NYCFC’s backs were against the wall right from the start in this one. Maxime Chanot got himself sent off in just the third minute of play for tripping Lucas Zelarayan when he was clear through on goal. The foul didn’t look like much, but VAR confirmed it was denying an obvious goal-scoring opportunity, thus earning a very early shower for the NYCFC defender.

The early red sent NYCFC into a defensive shell for the majority of the match. It took a while. but Columbus did finally crack it early in the second half. Harrison Afful picked out Zelarayan, who dribbled around the NYCFC defense and curled an excellent shot into the top corner of the net for the opener in the 56th minute.

Columbus had a chance to double the lead at the 73 minute mark when Zelarayan picked out Luis Diaz completely unmarked on the doorstep. Diaz severely mishit is shot, however, and sent the ball way, way off target. On the other end, NYCFC did apply some pressure in the dying minutes of the match, but they couldn’t put together a serious threat.

NYCFC will travel to Canada to face Toronto FC next Saturday night while the Crew head to Seattle to take on the Sounders.

The new-look FC Cincinnati started off the season in the loss column it knows all to well from last season.

Credit 27-year-old Frenchman Florian Valot for two assists in the first half after finding Kyle Duncan in the box in the 16th minute, and Kaku Romero in transition to double the lead in the 27th.

Cincinnati responded just after the whistle in the second half though, Brandon Vazquez spotted Allan Cruz in the box and he finished it with a missile from point-blank.

The goal prompted a positive spell for the visitors, but when they relinquished control, Dani Royer punished them with a run in the 70th minute in which he beat three Cincinnati shirts in the box and blasted one past keeper Spencer Richey.

New DP striker Jürgen Locadia pulled one back late after coming up short a handful of times as Cincinnati battled, but couldn’t find a late equalizer.

The Red Bulls are on the road next Saturday against Real Salt Lake and FC Cincinnati are in Atlanta.