There were plenty of impressive efforts delivered by Major League Soccer newcomers in the opening week of the 2020 season, but the weekend’s best performances were delivered by some seasoned MLS veterans.

Kevin Molino and Ethan Finlay partnered up to help Minnesota United deliver a big road win, and they both earned spots in SBI’s MLS Best XI for Week One in the process.

Carlos Vela and Jordan Morris joined in on the fun, as each turned in winning goals to cap off strong outings. Maxi Urruti delivered a winner of his own to help Thierry Henry begin his MLS coaching career with a victory in his first league match in charge of the Montreal Impact.

There were some newcomers who did earn their way onto the Best XI for Week One, including Oswaldo Alanis, who delivered a jaw-dropping free kick equalizer in San Jose’s draw against Toronto FC, and LAFC goalkeeper Ken Vermeer, who was active and entertaining in goal to preserve a shutout win against Inter Miami.

Here is the SBI MLS Best XI for Week One: 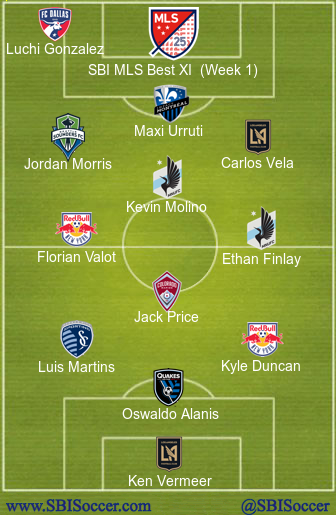 Ken Vermeer was busier than most would have expected him to be, making seven saves and registering 11 recovers to post the shutout against LAFC.

Luis Robles was on the losing end against LAFC, but the Inter Miami captain showed his quality, making eight saves to earn honorable mention in this week’s Best XI.

Oswaldo Alanis showed his quality in his MLS debut, and will be a goal threat as well as an elite defender. Luis Martins has taken hold of the starting left back spot with Sporting KC and looks poised for a big second season. Kyle Duncan was outstanding as an attacking right back for the Red Bulls, and for one day at least he made Red Bulls fans forget about the departure of Kemar Lawrence.

Eddie Segura was outstanding for LAFC, and probably deserved more than just an Honorable Mention nod, while Roberto Puncec, Kiki Struna and Matt Hedges all turned in strong outings as well.

Florian Valot made an inspiring return from his second torn ACL, setting up a pair goals in the Red Bulls win vs. FC Cincinnati, while Kevin Molino served up some hope for Loons fans worried about the team’s perceived lack of a playmaker. Ethan Finlay also turned back the clock, with one of his best outings in a Minnesota United Uniform.

Honorable Mention feels a bit inadequate for Lucas Zelarayan, and the Crew playmaker’s impressive debut was certainly Best XI- worthy, while Ezequiel Barco was excellent in Atlanta United’s win against Nashville SC. Cristian Roldan was another Best XI-worthy option who fell just short. Rookie Tanner Tessmann was very impressive in his pro debut, helping lock down Philadelphia’s midfield on the way to a 2-0 win.

Jordan Morris was unstoppable for his 45-minute appearance in Seattle’s win against Chicago, sparking the comeback. Carlos Vela’s moment of brilliance win LAFC its match, and the same can be said for Maxi Urruti, who delivered his own beautiful chip goal ala Vela.

There were plenty of impressive forwards in Week One, including Cristian Pavon for the LA Galaxy, Daniel Royer for the Red Bulls, and Khiry Shelton for Sporting KC.

Luchi Gonzalez had some serious lineup juggling to do, and his personnel decisions and strategy to neutralize the Union worked perfectly, particularly in the second half, when Dallas took control of a tightly-contested match.

What did you think of this week’s picks? Who were you happy to see chosen? Who missed the cut that you feel deserved a mention?