MLS Week Two might have been a week to forget for Chicharito Hernandez, but it was a memorable week for some of the other Mexican stars in Major League Soccer.

Alan Pulido turned in a stellar performance for Sporting Kansas City in his home debut, notching a goal and assist to earn a spot on SBI’s MLS Best XI for Week Two. LAFC’s Carlos Vela has made Best XI selections a regular occurrence, and this week was no different after his showing in Sunday’s 3-3 draw with the Philadelphia Union.

The Minnesota United tandem of Jan Gregus and Ike Opara secured places on the Best XI with their outstanding contributions to Saturday’s 5-2 road hammering of San Jose, while Marc Dos Santos and Ali Adnan were included for their roles in the Whitecaps’ upset of the LA Galaxy.

Here is the SBI MLS Best XI for Week Two: 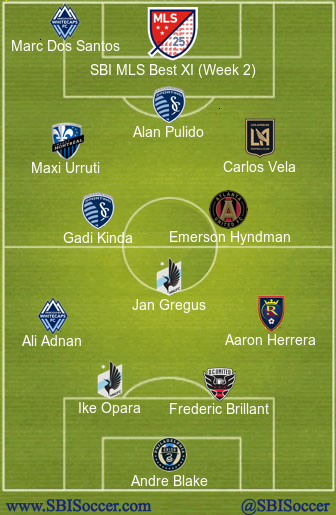 It isn’t often when a goalkeeper can give up three goals and still be considered a Man of the Match, but Andre Blake was the key reason the Philadelphia Union escaped Los Angeles with a draw in Sunday’s thrilling 3-3 tie with LAFC. His eight saves, many of the stellar variety, made him the standout goalkeeper of the week.

Sean Johnson came out on the losing end of New York City FC’s 1-0 loss to Toronto FC, but his seven-save performance was worthy of Honorable Mention this week.

Ike Opara’s two-goal performance in Minnesota United’s 5-2 romp over San Jose made him an easy pick this week, while D.C. United’s Frederic Brillant delivered the winning goal against Inter Milan to secure his place in the Best XI. Aaron Herrera was outstanding in Real Salt Lake’s draw with the New York Red Bulls, and Ali Adnan was excellent in Vancouver’s upset win against the LA Galaxy. Both Herrera and Adnan delivered the assists on their teams’ lone goals.

There were several standout showings by central defenders in Week Two, including Andy Rose’s showing against the Galaxy, Jakob Glesnes’ golazo-led outing against LAFC, Yeimar Gomez-Andrade’s solid effort for Seattle against Columbus and Fernando Meza’s impressive display for Atlanta United. Among fullbacks, Keegan Rosenberry and Brandon Bye put in good shifts for their respective teams.

Jan Gregus was SBI’s MLS Player of the Week for his one goal and two assist performance against San Jose, while Gadi Kinda was excellent for a second straight week to help Sporting Kansas City steamroll the Houston Dynamo. Emerson Hyndman put in his second straight game-winning goal for Atlanta United to secure his Best XI spot.

Alan Pulido showed his quality in Sporting KC’s romp, scoring a goal and setting up another, while Maxi Urruti’s two goals propelled Montreal to an impressive road draw against FC Dallas. LAFC’s Carlos Vela scored another beautiful free kick goal and was a consistent threat in Sunday’s 3-3 thriller against Philadelphia.

Vancouver’s Marc Dos Santos made all the right moves, both in terms of lineup selection, and strategy, to neutralize the LA Galaxy and rebound from a disappointing season opener.

What did you think of this week’s picks? Who were you happy to see chosen? Who missed the cut that you feel deserved a mention?