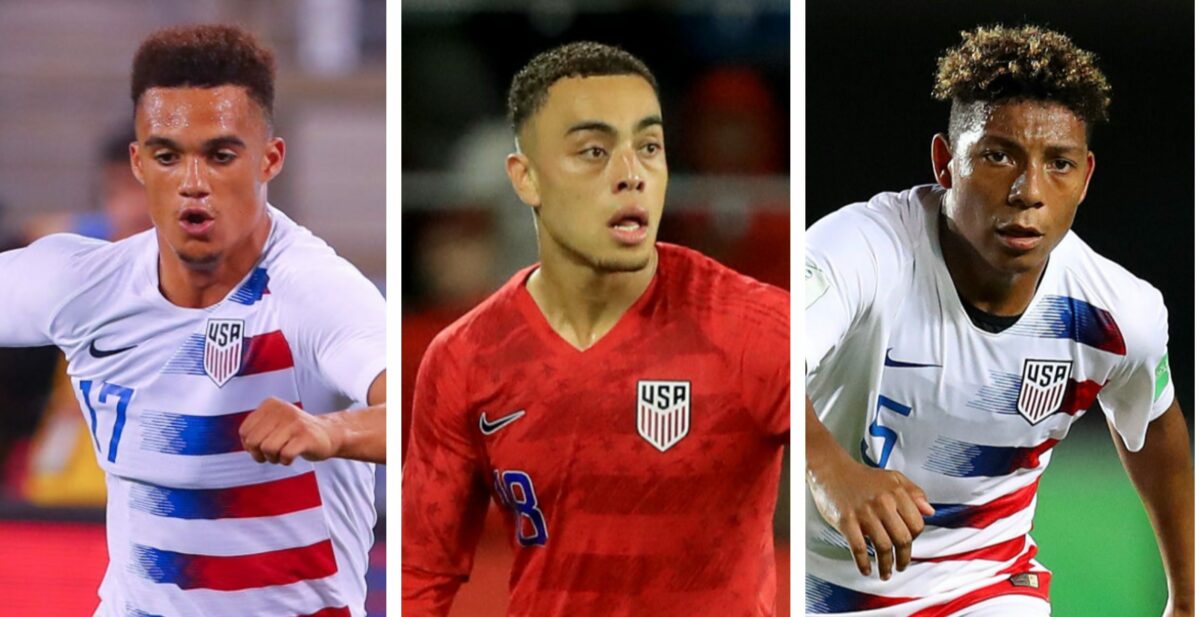 With the game of soccer currently on hold around the world, it is a good time to take stock of the U.S. Men’s National Team talent pool as we wait for the sport to resume.

SBI is taking a closer look at each position in the USMNT player pool, ranking the top options, based both on recent form, and potential.

Up next are the left backs, the players who will be looking to help fill a long-standing void at a position that hasn’t had a dominant presence very often for the USMNT.

That could be changing now that Sergino Dest has chosen to play for the United States, and now that there are a wave of exciting left back prospects making their way up the club ranks. At the moment there are more high-level left back prospects in the USMNT pipeline than ever before, and while some of them may not be ready to make a serious push for the 2022 World Cup, at least a few of them should be able to make good cases in the next three years.

It will be interesting to see how Berhalter handles the position in the new year. We saw some older players log time at left back in 2019, with Tim Ream and Daniel Lovitz earning regular call-ups, but this year should see younger candidates earning the majority of the minutes.

Ream is left off the list due to his age, and this lists’s focus being on long-term prospects. The reality is Ream could very well still be a part of Berhalter’s plans when World Cup qualifying begins, but Ream will be 35 when the 2022 World Cup kicks off, making his involvement highly unlikely by that point.

Here are the Top 10 left back prospects in the USMNT pipeline:

The Ajax fullback is arguably the best USMNT option at both right back and left back heading toward 2022, but left back should be where he settles until the youngsters in the pipeline are ready to push him to the right.

The 19-year-old will continue to face stiff competition for minutes at Ajax, but he is a safe bet to stay in Gregg Berhalter’s lineup even if he hits some rough patches with his club team.

An Everton academy product, the English-American defender left the Liverpool club on a permanent move to Wigan last summer and has established himself as a regular starter for the Championship side.

Robinson earned seven caps over two years, but failed to make the Gold Cup team last summer, and has yet to be called back in since that disappointing stint. The new year began with a whirlwind transfer saga involving AC Milan, but Robinson’s proposed move was halted by what was later discovered to be a heart defect. He has been out of action since the defect was discovered, and he is set to undergo a procedure to address his condition.

A standout starter on the U.S. Under-20 World Cup team last summer, Gloster is a natural left back who brings excellent attacking qualities to the position and is the same age as Dest.

The PSV fullback is still waiting to make his first-team debut, but he has pushed his way into the squad at Jong PSV after just arriving in the Netherlands from Hannover last summer.

A player who wouldn’t have been on this list at all a year ago, Gasper broke through with an impressive rookie season with Minnesota United, establishing himself as a strong defender and capable ball-handler worthy of a look from Gregg Berhalter.

As a result, Gasper has been called into the January camp and will be in contention for a place on the Olympic qualifying squad. The 22-year-old has a chance to create some distance between himself and the younger players on this list.

A player who made the most of his chance to develop his game in USL, Vines clocked 29 games with the Charlotte Independence, which helped put him in position to be a factor in 2019 with the Colorado Rapids. The result was 26 appearances and a solid first season as the Rapids’ starting left back.

The 20-year-old left back earned a USMNT call-up to the January camp, giving him a chance to impress Berhalter and try to stake claim to the left back job on the Olympic qualifying team.

The FC Dallas veteran is one of the more underrated fullbacks in MLS, with the converted winger thriving in 2019 as an effective weapon at left back. The 28-year-old is a better attacker than defender, but has shown steady improvement on the defensive side of the ball.

Hollingshead hasn’t received a USMNT look before, and he’s turning 29 in April, which puts him on the older side for a chance at the 2022 World Cup.

One of the standouts on the U.S. Under-17 World Cup team, Hernandez-Foster didn’t have a chance to show his qualities as a left back due to his run in central defense, but he is a teenager with a bright future.

Will that future keep him with the LA Galaxy, or will he head elsewhere when he turns 18? There have been rumblings that he plans on signing with Bundesliga side Wolfsburg, and following the trail blazed by fellow Galaxy academy product Ulysses Llanez.

A year ago Bello was looking at a very exciting year ahead, but injuries left him sidelined for a large part of 2019, thwarting his chance to truly break out.

Will 2020 be Bello’s chance to become Atlanta United’s first-choice option at left back? It is easy to forget how young he is (Bello turns 18 later in January), but the good news is he should be able to find regular starts with Atlanta’s USL affiliate if Frank DeBoer decides he isn’t ready for the first team.

The Nashville SC defender saw more call-ups from the USMNT than most USMNT fans would have liked, and the reality is he failed to do much with the opportunities he received.

To be fair to Lovitz, he has played better than he did in 2019, when he fell out of favor with the Montreal Impact, which precipitated his move to Nashville. The change of scenery could help him get back to being one of the best left backs in MLS, and the 28-year-old clearly has qualities that Gregg Berhalter likes, so a national team return isn’t impossible.

The former Sacramento Republic academy product is another of the many young Americans to make the jump to Germany, and the Hamburg left back is currently training with Hamburg’s first team with a chance to take the step up from the U-19 team.

The 18-year-old has some good competition in his U-20 age group at left back in Hernandez-Foster and Bello, but if Sousa can earn first-team minutes, he can start to climb up this list.