The end of the current decade will bring to a close an U.S. Men’s National Team era that had its share of painful moments, but also plenty of good ones delivered by some of the best USMNT players in history.

We are in the midst of a generational shift with the USMNT, and that shift becomes all the more apparent when you stop to think about the top performers of the past decade. There are a few players in SBI’s USMNT all-Decade team who still have roles on the current national team, but recent years have seen the retirements and gradual departures of several key figures.

The SBI USMNT All-Decade team was chosen based strictly on performances with the national team, and while some picks were extremely easy to make, there were also some very tough calls. Some players were chosen despite not having compiled as many total game played as their competitors, but those who delivered memorable performances and tournaments on big stages earned nods over those who may have logged more games played, but didn’t have the same level of peak performances.

Who were the best USMNT performers of the past decade? Here is SBI’s USMNT All-Decade Team: 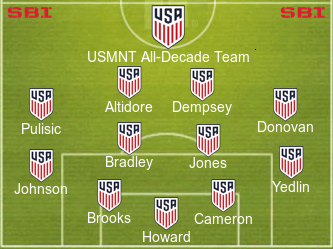 The unforgettable performance against Belgium in the 2014 World Cup stands out as Howard’s masterpiece, but he provided much more than that during the past decade. A starter in the 2010 and 2014 World Cups, Howard compiled 73 appearances in the decade, posting a 33-23-13 during that time, with 23 shutouts.

A surprise inclusion on the 2014 USMNT World Cup team, Yedlin parlayed the good impression he made in Brazil into a transfer to Tottenham, and he has stayed in England ever since. He has made the transition from attack-minded speedster to a more defensively-solid right back who is the favorite to start in the position in the next World Cup qualifying cycle.

Though his exit from the USMNT picture was an acrimonious one, there is no denying the credentials he put together during a solid stretch in a starting role. The versatile defender earned starts at right back, centerback and in defensive midfield, and put in good showings at the 2014 World Cup. He made 55 appearances for the USMNT, generating four goals and an assist while logging 4,376 minutes.

There were other centerbacks who played far more games, but no American centerback this decade had a better tournament than Brooks’ Copa America Centenario, or a bigger moment than his game-winning goal against Ghana at the 2014 World Cup. Injuries have limited Brooks to 38 appearances despite being the best American centerback for more than half the decade, but his 2,970 minutes played were generally very impressive.

Another player who played a variety of positions, Johnson slots in at left back on the USMNT All-Decade team even though his peak was actually at right back at the 2014 World Cup. Johnson made 57 appearances for the national team, recording two goals and 11 assists, logging 3,522 minutes in the process.

No USMNT player this decade played in more games, logged more minutes or produced more assists than Bradley. The long-time USMNT captain began the decade in style with a standout 2010 World Cup, and has closed out the decade with a Best XI selection in last summer’s Gold Cup.

He made a whopping 112 appearances for the USMNT in the past decade, providing 10 goals and 23 assists in 8,839 minutes. You need only look at the Top 30 USMNT goals of the past decade to appreciate the impact he had over the past 10 years.

A key figure during the Jurgen Klinsmann era, Jones earned his place on the All-Decade team on the strength of his penchant for stepping up in big games.

Jones made 69 appearances for the USMNT in the decade, contributing four goals and eight assists in 5,331 minutes of action. He was one of the team’s best players at the 2014 World Cup, and turned in some memorable outings in Gold Cups and World Cup qualifying.

Though the bulk of his main contributions in this decade came at the very start of the decade, it doesn’t take away from just how special he was during that period for the USMNT. His winner against Algeria at the 2010 World Cup was the biggest moment of the decade for the national team, and he also helped lead the Americans to a 2013 Gold Cup title.

His absence from the 2014 World Cup squad will go down as the most controversial decisions of the decade, but he still still finished the decade with an impressive 15 goals and 15 assists in 37 appearances and 2,952 minutes.

The decade’s leading goal-scorer for the USMNT, Dempsey finished with an impressive 40 goals and 14 assists before he retired, including goals in both the 2010 and 2014 World Cups.

Dempsey made 81 appearances for the national team in the past decade, playing a vital role in every major tournament the team played in. He finished with 6,594 minutes played during the past decade, second only to Bradley.

While injuries kept him from being able to play in several major tournament matches, Altidore still managed to put up big numbers in the decade. He is second only to Bradley in total matches played with 92, and his 34 goals scored are second only to Dempsey’s 40.

Altidore also provided 12 assists during his 6,538 minutes in the decade, the third-most minutes logged by any USMNT player over the past 10 years. His goal-scoring run in the 2014 World Cup qualifying cycle, and his free kick beauty in the 2017 Gold Cup final stand as the high points of his decade.