With the new decade officially underway, it is a good time to look back at the decade we just said farewell too, including the decade in MLS, and the best the league had to offer.

Major League Soccer had some special teams in the past decade, from the dynasty run of the Robbie Keane-led LA Galaxy, to Toronto FC’s treble-winning side. The New York Red Bulls deserve some plaudits for their trio of Supporters’ Shields, while the Seattle Sounders finished the decade with more trophies than any other team in the league, including the MLS Cup it capped the decade with.

Who were the best players in MLS in the past decade? The answer depends entirely on the criteria you choose to base your team on, and while some might focus on players who had the most impressive peaks, and some other might look strictly at accumulated stats and titles, there should be some middle ground factoring in all those elements.

SBI’s MLS All-Decade Team are the players we believe had the best overall decades at their respective positions, and who had at least four full seasons in MLS in the decade. 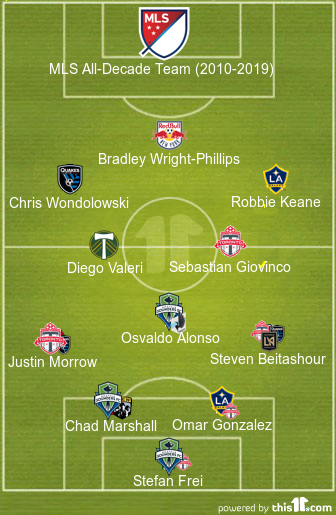 There were some goalkeepers with very good cases for this spot, including Luis Robles and Nick Rimando, but Frei helped lead the Seattle Sounders to a pair of MLS Cup titles, and saved some of his best work for some of his team’s biggest matches.

MLS wasn’t blessed with many right backs who could boast longevity, quality and team success in the past decade but Beitashour set the bar as a key figure on three different elite teams. He won a Supporters’ Shield with the San Jose Earthquakes, multiple trophies with Toronto FC, and capped his stellar decade with another Supporters’ Shield with LAFC.

A player who would merit a spot on the all-time MLS Best XI, Marshall followed up an impressive first decade with a stellar second decade as the pillar of Seattle’s defense. The 2014 MLS Defender of the Year was a key figure in the Sounders’ run to the 2016 MLS Cup  title, and was a dominant defender for most of the decade.

The defensive anchor on the decade’s most impressive dynasty, Gonzalez would have had a spot on this team even before his return to MLS and 2019 season with Toronto FC, but his return and contributions to TFC’s run to another MLS Cup final only added to Gonzalez’s impressive resume, which included three MLS Cup titles and the 2011 MLS Defender of the Year award.

The left back position was arguably the weakest in MLS in the past decade, but teams that were lucky enough to have Morrow had no complaints. His ability to get forward, along with his strong defensive qualities, made him the most complete left back in the league for years. It isn’t a coincidence he was a key presence on two of the decade’s top teams (2012 San Jose Earthquakes, 2017 Toronto FC).

MLS had several impressive defensive midfielder standouts in the past decade, but none were as dominant for as long as Alonso was. He helped Seattle win an MLS Cup, Supporters’ Shield and three U.S. Open Cup titles, then finished the decade with a season in Minnesota, where he helped the Loons become a playoff team.

One of the best signings of the decade, Valeri has been instrumental in helping establish the Portland Timbers as one of the league’s better teams. His consistent production for the better part of seven seasons gave him the edge over some other playmakers with strong cases, such as Nicolas Lodeiro and Landon Donovan.

It was impossible to leave out the Italian star even though the forward position was overcrowded, but Giovinco was worth making a positional exception after his record-setting 2015 season, and the trophies he helped TFC win.

How do you leave out a striker who scored at least 15 goals in five straight seasons, and served as the leading scorer on three MLS Supporters’ Shield winning teams? You don’t. Wright-Phillips was far too prolific and dependable to exclude from any All-Decade team, even if his injury-plagued 2019 season may have

No player embodied consistency like Wondolowski, who scored at least 10 goals in each season this decade. Yes, you read that right. Every single season. His then-record 27 goals in 2012 served as the high point, and his play that season, helping the Earthquakes win a Supporters’ Shield, was some of the best soccer we saw in MLS this decade.

The figurehead of the LA Galaxy’s dynasty run at the start of the decade, Keane was the leading star on the 2011, 2012 and 2014 MLS Cup title runs, earning four MLS Best XI selections and the 2014 MLS MVP award.