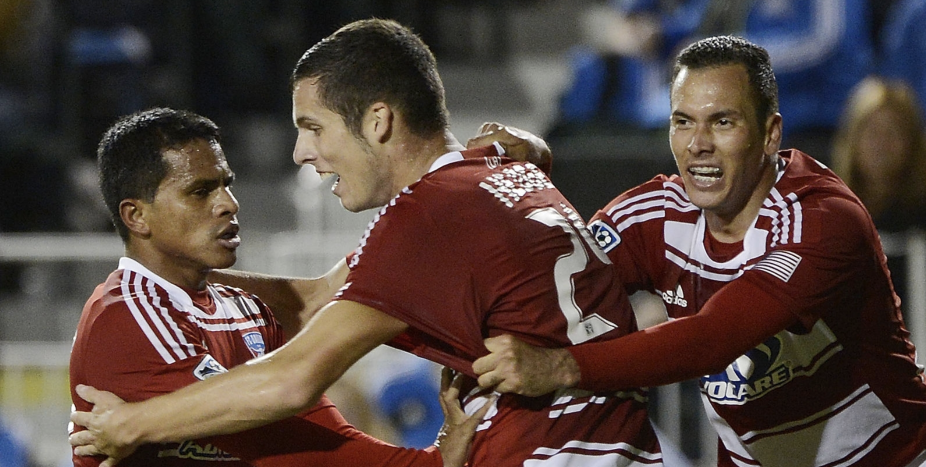 We will continue with FC Dallas/Dallas Burn as one of the league’s original teams. Dallas is still seeking its first MLS Cup, but has lifted two U.S. Open Cups and one Supporters Shield crown in its 25-year history.

As you might expect, the Dallas All-Time XI is dominated by members of those early years, while also featuring a few modern-day players.

Here’s a closer look at the All-Time Best XI for the Dallas Burn/FC Dallas: 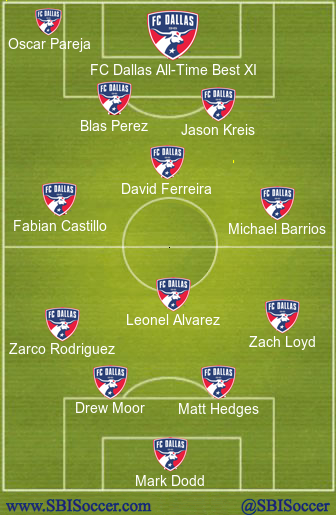 Mark Dodd was the first goalkeeper for the Dallas Burn and had a successful four seasons before injuries cut his career short. Dodd helped the Burn to their first-ever U.S. Open Cup title in 1997, while totaling 92 appearances for the club in his four seasons.

Playing his entire MLS career with FC Dallas, Zach Loyd embraced the challenge during his six years there. Loyd played primarily as a right back, but finished his career as a centerback for the Western Conference club, making combined 180 appearances.

The cornerstone of FC Dallas’ current squad, Matt Hedges will go down a club legend when his career comes to an end. Hedges has made 255 combined MLS appearances since being drafted by Dallas in the 2012 MLS SuperDraft. He’s made the MLS Best XI twice as a central defender and was the league’s Defender of the Year in 2016.

Drew Moor has bounced around MLS during his lengthy career, but began in 2005 with FC Dallas. In his five seasons in Texas, Moor totaled 123 appearances in league play while featuring as a centerback and right back. Always playing with a never-give-up attitude, Moor continues to fight for minutes in Colorado.

Jorge “Zarco” Rodriguez was a versatile player for FC Dallas, finishing with 155 career appearances with the club. Rodriguez scored 25 goals and added 18 assists while also winning the club’s Defender of the Year three separate times.

A two-time MLS All-Star in 1996 and 1998, Leonel Alvarez was Dallas’ top defensive midfielder during his time with the club. He was also named to the league’s Best XI in 1996 and returned to the club after a short spell with Liga MX Veracruz.

At 29-years-old, Michael Barrios remains a top playmaking option for FC Dallas. In his five previous MLS seasons, Barrios has recorded 30 goals and 41 assists in league play and remains a veteran piece of FC Dallas’ roster under Luchi Gonzalez in 2020.

Fabian Castillo toyed with opposing MLS defenders for six seasons at FC Dallas. Castillo played in 159 regular season games for the club, while scoring 34 goals and registering 30 assists. He has since played in Turkey and Mexico, and is currently under contract with Liga MX side Queretaro.

David Ferreira was a talented playmaker who excelled during his five seasons with FC Dallas. A 2010 MLS MVP, Ferreira finished his career with 24 goals and 39 assists in over 100 appearances while propelling Dallas to an MLS Cup Finals appearance in the same season as his MVP recognition.

A dominant forward during his four seasons with FC Dallas, Blas Perez averaged nine goals a season in MLS. Perez finished his FC Dallas career with 36 career goals and 14 assists in 97 appearances, showing willingness to become an all-around forward. FC Dallas’ leading goalscorer in three of his four seasons there, Perez earned over 120 caps with the Panamanian National Team.

Jason Kreis will go down as the best player ever in the history of the club. Making over 240 appearances for the Dallas Burn, Kreis finished his career with 91 goals and 65 assists, both first in club history. A strong passer and scrappy forward, Kreis scored the first MLS goals for both Dallas and Real Salt Lake during his 12-time career. Kreis has since moved onto coaching and is currently the U.S. Under-23 Men’s National Team head coach.

Originally a standout player during eight seasons with the Dallas Burn, Pareja made an even bigger impact as a coach. First, he helped lay the foundation for FC Dallas’ highly-successful academy system, then he rejoined FC Dallas after a stint as Colorado Rapids head coach to transform FC Dallas into a Western Conference powerhouse. He posted a 90-59-50 record in his five seasons as FC Dallas coach, with the 2016 season —which saw FC Dallas earn a Supporters’ Shield- U.S. Open Cup double— as the standout campaign.