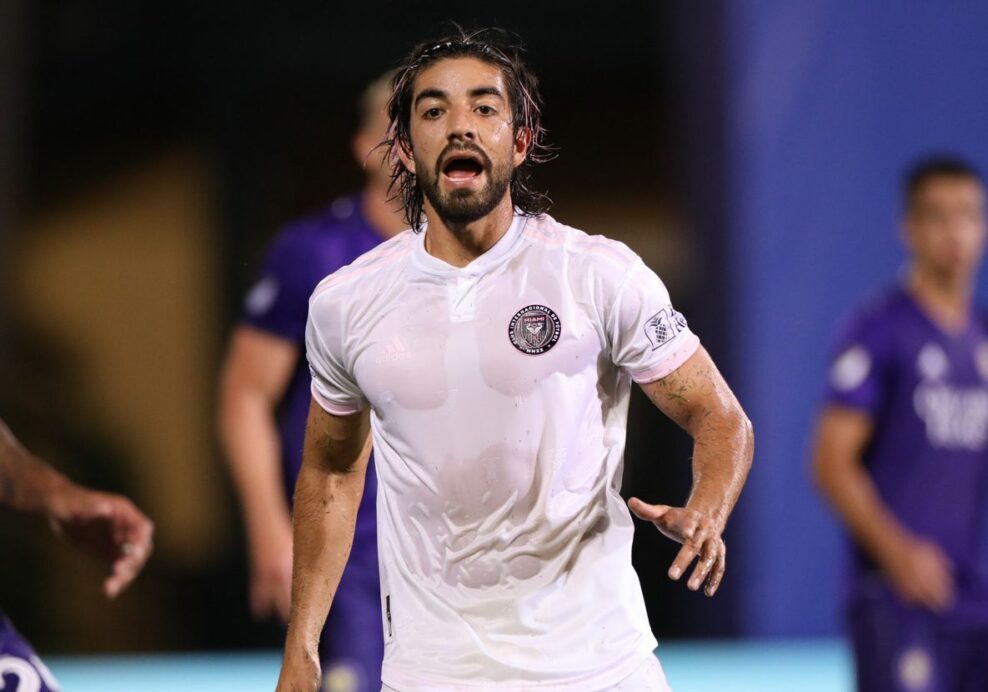 There were always going to be cobwebs to shake off after such a lengthy layoff, but Inter Miami was plagued by more than just rust.

Particularly in the midfield.

Inter Miami suffered a frustrating 2-1 defeat to Orlando City on Wednesday night in the MLS is Back Tournament opener. A stoppage-time strike from Nani following a deflection in the penalty area proved to be the difference in the first edition of the Sunshine Clasico, but there was more to Inter Miami’s loss than just a late unlucky bounce.

As has been the case for much of the expansion side’s first three games, a lack of quality with the ball in the middle of the park was evident on Wednesday. Central midfielders Wil Trapp and Victor Ulloa struggled to help build up attacking sequences in the face of Orlando City’s effective pressure, and that was part of the reason why the Lions won the possession battle by a 58-42 mark.

It was not entirely Trapp and Ulloa’s faults for that, however. Inter Miami head coach Diego Alonso opted to go with a 3-4-3 formation that featured wingbacks and did not include Designated Player Rodolfo Pizarro due to a recent injury. That left Inter Miami with more defensive-minded players on the field than creative ones, which naturally led to very few moments of interplay and combination passes.

Alonso’s idea seemed to be to try and use the width provided by wingbacks Dylan Nealis and Mikey Ambrose and wingers Lewis Morgan and Matias Pellegrini to attack Orlando City. It never really came off, though, aside from one early look off a great cross that Juan Agudelo pushed wide.

It is no coincidence that once Inter Miami started to move the ball better early in the second half — playing it up the field from one flank quickly to the other to mitigate the lack of a creative midfielder in the center of the park — that the expansion club had some of its most promising sequences.

In fact, that is exactly how Inter Miami got its goal.

Absolute teamwork 🔥@JuanAgudelo with the perfectly timed finish. First goal of the game, first goal of the tournament!#ORLvMIA | #YourFútbolisLive pic.twitter.com/3A0kvUV3Ha

You have to imagine that Pizarro will likely start the next match given Inter Miami’s need for points, but if the team’s first three matches are anything to go by then the Mexican international will probably not be able to make a significant difference in regards to keeping possession all on his own.

He will likely need help and a good candidate for that is the soft-footed and creative Lee Nguyen, who subbed into the game on Wednesday and had an immediate connection with Pizarro. The two combined well and often, and that is more of the type of play Inter Miami needs if it is going to unlock defenses with the personnel it has available.

After all, Ulloa and Trapp are similar in the sense that they are more known for their industry and defensive work than their attacking qualities. Nguyen may not provide the type of steel they bring, but he is more comfortable on the ball and has better vision.

Right now, Inter Miami could clearly use more of that.

Wednesday’s decision to go with the 3-4-3 formation meant Inter Miami needed a center forward to spearhead the attack. Alonso went with Agudelo over Julian Carranza, but in doing so the manager may have learned a valuable lesson.

Anyone who has followed Agudelo’s career knows he is not a pure striker. The veteran is more of a hybrid or a 9.5 rather, boasting the type of size and technical skills that you could want out of a your center forward but lacking the requisite goal-scoring instincts. His lack of a defined best spot is why he has bounced around a number of positions, including at center midfielder.

Against Orlando City, he was asked to be Inter Miami’s most advanced player. The confident Agudelo occupied those spaces up top at times, but also found himself out wide and playing with his back to goal often, a direct result of the lack of service he got as well as his own natural tendencies.

The 27-year-old attacker prefers to play to feet and is not one to really try and stretch defenses with runs in behind, qualities that were seen clearly on at least two occasions on Wednesday in which teammates played passes into space while Agudelo checked back to receive the ball. The result? Quick turnovers and a waste of possession.

Agudelo has regularly been seen as an intriguing option at striker, but multiple coaches have tried using him as a No. 9 only to change their minds later. Deploying him there just does not play to his strengths, and prevents him from maximizing his chances of making an impact.

Alonso might just have become the latest manager to realize that.

Luis Robles (5) — Wasn’t too busy on the day and made a great early stop on Chris Mueller, but probably should have done better on the equalizer.

Dylan Nealis (4) — Served as a very good outlet down the right and played a pivotal part in the opener, but failed to challenge Nani’s cross on the equalizer and did not follow the Portuguese winger on the winner.

Andres Reyes (6.5) — Best player for Inter Miami on the night. Broke up attacks both in the air and on the ground, and was a big reason why Orlando City was held at bay for so long. His absence after the injury was felt.

Nicolas Figal (5) — The Argentine fared well for much of the game, but he had a couple of lapses in judgement at the back. The first in the opening half did not prove costly, but the second in the closing 45 minutes did.

Ben Sweat (5) — The usual left back stepped into a central role across the back line and held up decently. He ball-watched a bit too much on Orlando City’s tying goal, though he should have gotten some cover on the play.

Mikey Ambrose (4.5) — Was in no man’s land on Mueller’s leveler, failing to track all the way back to help Sweat out. Overall, he filled in competently on the left wing, but his attacking contributions were largely ineffective.

Victor Ulloa (5) — Followed up a quiet first half with a great incisive run and precise low cross to set up Inter Miami’s opener shortly after the break. Dropped to centerback after Reyes left and played okay there.

Wil Trapp (4.5) — Still has not found a level of comfort in Inter Miami’s midfield. It was another muted performance from him on both sides of the ball before being subbed off.

Lewis Morgan (5) — His set piece delivery was dangerous throughout, and he put in a lot of defensive work on the right. Still, his end product left something to be desired.

Juan Agudelo (5) — The good movement and finish on the opener in the 47th minute salvaged what was an otherwise forgettable outing. He missed a good look early on, and was unable to get very involved.

Matias Pellegrini (5.5) — Showed aggressiveness and a willingness to go at defenders, even if his moves did not always come off. His sublime cross to Agudelo in the first half deserved a better finish.

Rodolfo Pizarro (5.5) — Came into the match and injected a necessary dose of quality. He combined well and tried to get forward almost every time he got the ball. His absence from the starting XI was noticeable.

Lee Nguyen (6) — Another sub that entered the match and helped bring the type of good attacking ideas and smoothness on the ball that were largely missing on the day. He certainly has a case for more minutes.

Jay Chapman (6) — Showed well after checking in midway through the second half by playing forward often and nearly putting a header on frame late on one corner kick.

Luis Argudo (5.5) — Was lively and confident with the ball, but his touch let him down on a couple of occasions in the final third.

Julian Carranza (4.5) — Never really found the game after replacing Agudelo, and got a yellow card for his troubles.

Diego Alonso (4) — The head coach’s game plan did not work very well in the first half, but he made adjustments at the intermission that started to bear fruit prior before Reyes’ scary injury changed everything.