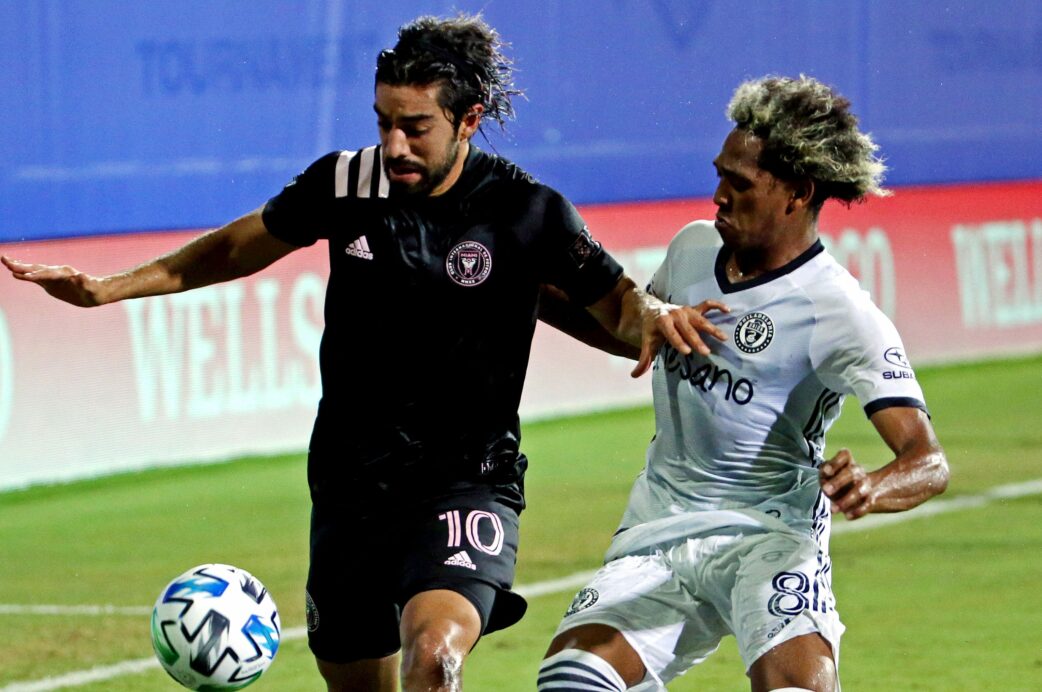 Inter Miami may be off to a winless start in its expansion season, but that has not shaken Diego Alonso’s confidence in the project one bit.

Inter Miami has gotten off to a rough start in its expansion season, dropping all four matches to date and two in the ongoing MLS is Back Tournament. The poor initial results have Inter Miami on the verge of an early elimination from the competition and in second-to-last place in the overall Eastern Conference standings, but Alonso’s belief in his side has not wavered at all.

Inter Miami technically could still win its first title in the MLS is Back Tournament, but the fledgling club is a long shot to even advance to the knockout rounds after narrow losses to Orlando City in the Sunshine Clasico and the Philadelphia Union.

A Monday matinee with New York City FC — the only team below Inter Miami in the overall Eastern Conference standings due to goal differential — awaits. A victory there would give Inter Miami its historic first win, and would keep the team alive in the MLS is Back Tournament.

At the very least for a few more days, and quite possibly longer.

Prepared for the Morning Kickoff

From the wakeup times to the early pregame meal to the heat and humidity, much has been said about the challenges of the morning matches in the MLS is Back Tournament.

Inter Miami is more than up for it, though.

“It’s very simple,” said Alonso. “We are training at 8 AM all this week and that will make it so that the kickoff time is close to the time that we’ve been training, waking up, and eating breakfast. From that standpoint, I don’t think we’ll have any issues. I think it is unusual to play at that time, but we do train at that time regularly, be it here in Orlando or in Miami.

“I don’t see it as a big problem. It’s simply just something that’s different, to say it another way.”

While the team may be adjusting its internal clock to prepare for playing at 9 AM against NYCFC, the heat and humidity of Central Florida is still likely to be a factor. The weather forecast states that temperatures in Orlando should be around 81 degrees come kickoff, with humidity at about 76 percent.

The challenging weather conditions have made for slogs in some of the other morning games to date, an players and coaches on other teams have come out and been critical of the fixtures. Still, Inter Miami is not making any excuses.

Nguyen Ready To Start If Needed

Inter Miami’s central midfield tandem through its first four games has been Wil Trapp and Victor Ulloa, but the lack of results thus far could potentially lead to a change in personnel.

If that is the case, Lee Nguyen is more than ready.

“I’m a vet in the league and I just try to bring my experience and my calmness,” said Nguyen of what he offers Inter Miami. “Just try to help connect passes when I get in there to help my teammates flow forward.”

Up until now, Nguyen has been used strictly as an Inter Miami substitute. He has played in three of the team’s four matches, including in the first two games of the MLS is Back Tournament, but all of those appearances have come off the bench.

Despite the limited time, Nguyen has shown some of his trademark comfort on the ball and ability to connect forward passes. He has also seemingly developed a good understanding with attacking midfielder Rodolfo Pizarro, and that combined with Inter Miami’s need for a win on Monday may be enough to convince Alonso to include the American midfielder in the starting lineup for the first time.

“We are very happy with what he’s been bringing to the team,” said Alonso. “We think he has more things to give, and we think highly of him. Every opportunity we get we look to give him the chance to play again and have a chance to show it on the field so that he can help us.”

Nguyen stated on Friday that he feels physically fit enough to start, but emphasized the importance of the team’s success in the upcoming match. Anything short of a win on Monday will automatically eliminate Inter Miami, and that is where the focus lies.

“We can only control what we can control and that’s getting three points against NYC,” said Nguyen. “Whatever results happen after that, the chips are going to fall where they fall. As long as we get three points, we give ourselves a chance to go to the next stage so that’s all we can focus on.”