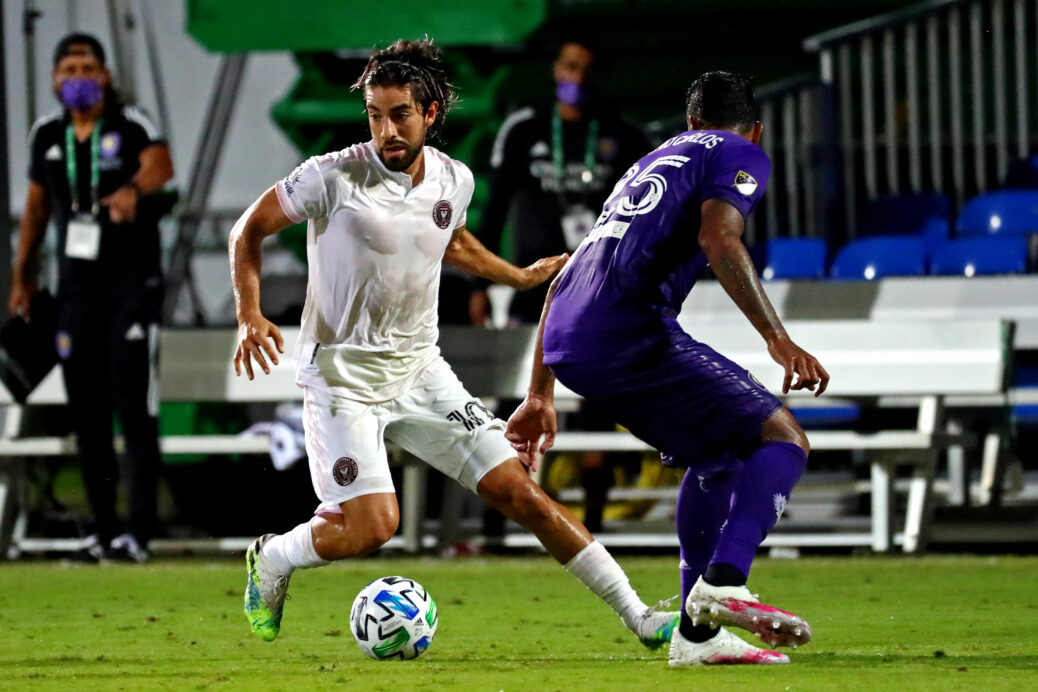 Inter Miami managed to put only one shot on target in the MLS is Back Tournament opener, and the team knows there is plenty of room for attacking improvement.

It is a good thing then for the expansion side that Rodolfo Pizarro is poised to return to the starting lineup.

Inter Miami is aiming to bounce back from last Wednesday’s 2-1 defeat to Orlando City, and Pizarro is expected to play from the start in the new club’s next match against the Philadelphia Union on Tuesday. The Designated Player came off the bench vs. the Lions due to a recent minor injury he had suffered, but should provide a boost to Inter Miami’s attack from the onset after it struggled to create many clear-cut scoring chances in the first game.

“Having Rodolfo back will also be a big positive for that,” said Inter Miami winger Lewis Morgan on Saturday. “When he came on, he looked sharp and it’s good to have him back and he’ll bring a lot to us.”

“We’re demanding of ourselves. We know we didn’t create as much as we would have liked to, but going forward that’s something that we’re eager to improve upon and I’m sure we will.”

Pizarro’s anticipated return should give the team the type of creative force in the middle of the park that was clearly missing in the opener. Inter Miami struggled to string together good attacking sequences against Orlando City, and played predominantly down flanks since it was missing a No. 10.

With Pizarro, Inter Miami should have more options to both generate chances and keep the ball better. The expansion side finished with 42 percent possession vs. Orlando City.

“Rodolfo’s quality is there for all to see,” said Lewis. “He operates very well in tight spaces and helps us move the lines from midfield to attack, and having someone like that playing inside you as a winger encourages you to make runs that maybe he can see and maybe he can find the pass.

“We’ve got guys in the team that are capable of doing that and Rodolfo is no different, but everyone knows his quality and he helps the team massively. It’s good to have him back.”

Another player that could be back in action vs. the Union is centerback Andres Reyes.

A collision between Reyes and Orlando City forward Dom Dwyer in the 51st minute forced the Colombian defender out of the opener on a stretcher. Reyes was admitted and later released from a nearby hospital, and immediately went into isolation upon returning to the Walt Disney World Swan and Dolphin resort to ensure he tested negative for COVID-19.

“Andres will very likely return to training with us today,” said Inter Miami head coach Diego Alonso on Saturday morning. “We’re happy that he has the possibility to begin practice, and the doctors have told me that he should be ready for the next game.”

If Reyes is ready to go, Alonso should have all of his top defenders to choose from for Tuesday’s Group A encounter. Fellow centerback Roman Torres will also be available for selection again after missing the first match due to a red card suspension that carried over from Week 2 of the regular season.

“It’s always difficult to watch the games from the outside because I always like to be playing and helping my teammates,” said Torres on Saturday. “It’s very complicated to have to watch games and not compete.”

Inter Miami may be new to MLS, but the team is already somewhat familiar with the Union.

The two Eastern Conference sides played one another in a preseason friendly back in February. The Union won that meeting by a 2-1 mark, and Inter Miami knows firsthand that another tough 90 minutes await.

“Philadelphia is a team that has a very well-oiled philosophy of play,” said Alonso. “They have been with their head coach a long time, which lets us know that they repeat patterns that they do very well. We’re going to need to put together a very good game if we want to compete and win.”