Red Bulls after early MLS is Back exit: “It’s not good enough for a club like ours” 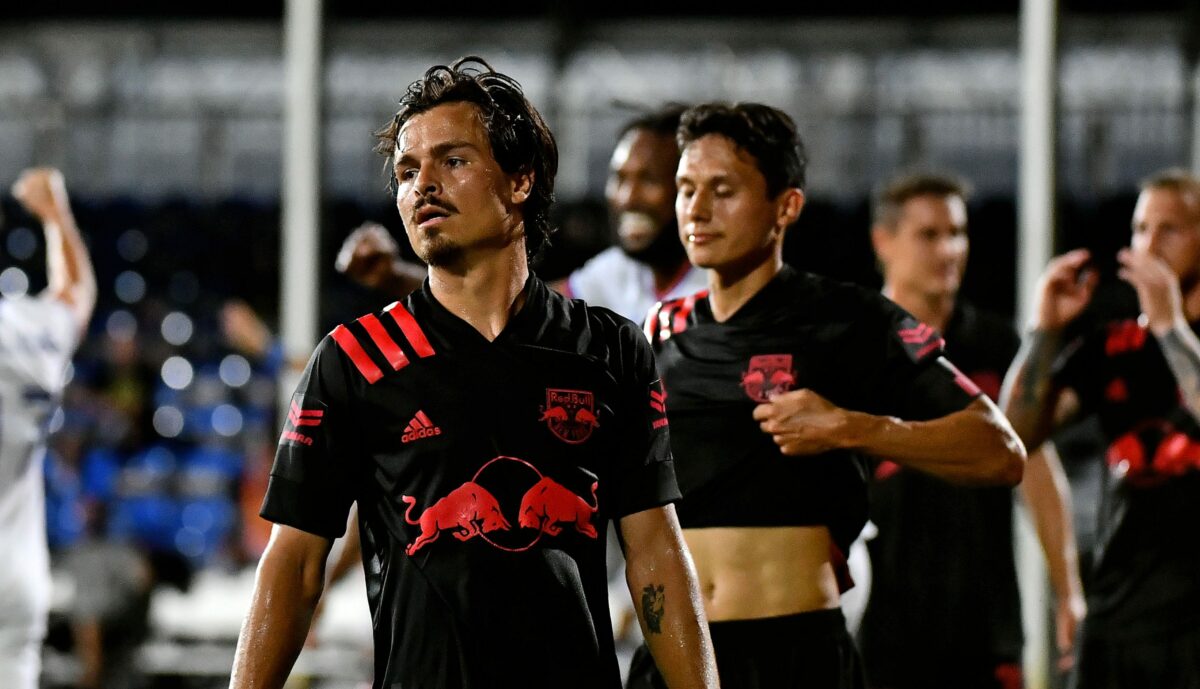 The New York Red Bulls are used to competing for titles. They fell well short of that this time around.

The Red Bulls were sent packing from the MLS is Back Tournament on Wednesday night following a shocking 2-0 loss to FC Cincinnati. The defeat dropped the Red Bulls to third place in Group E, and subsequently knocked them out of contention for a wildcard spot for the Round of 16.

The early elimination left the Red Bulls stunned. A campaign that started with so much promise and hope ended just like that, with only one win, two shutout losses, and a whole lot of pain and frustration.

“It’s not good enough for a club like ours,” said Red Bulls captain and midfielder Sean Davis. “The standards are high. We know what it takes to succeed at this club and what those standards are. To win our first game and not get the job done with our last two games is extremely disappointing.

“I can’t imagine how much it hurts (our fans). It hurts us. It hurts every single player, and we just have to be better. We wanted to come into this tournament and give our fans something to be excited about. Although the result against Atlanta was good, the last two games haven’t been good enough. We have to be honest about that.”

To say the Red Bulls endured a rough night on Wednesday is an understatement. They not only won the possession battle against FC Cincinnati by a 68-32 percent mark, but also outshot their opponents by a 19-4 margin. The Red Bulls also had a whopping 51 crosses against an FC Cincinnati side that was content to bunker in its own half.

Still, two defensive mistakes on either side of halftime were the Red Bulls’ undoing. Amro Tarek first flubbed a clearance in the 43rd minute that fell straight to Yuya Kubo, who proceeded to score. Then in the 56th minute, Florian Valot accidentally flicked the ball into his own net while attempting to defend a corner kick.

“We have to be more mature as a team,” said Davis. “Understand what teams are throwing at us, being able to adjust, and at the end of the day being so sharp, so alert that we can handle anything that is thrown at us.

“When we make silly mistakes, that doesn’t give us the best chance to win and that’s not a mature team. I think that’s where we can improve, that’s where as players we have to take responsibility for that.”

The Red Bulls will have to closer analyze exactly what went wrong in the competition in the coming days. After all, the team started the tournament in good fashion with a 1-0 victory over Atlanta United, only to then lose to both the Columbus Crew and FC Cincinnati.

Make it ✌️ for @fccincinnati!

A big part of the Red Bulls’ problem, however, was their lack of goals. The club scored four minutes into its first group match, but never again found the back of the net. The Red Bulls finished their tournament stay with a 266-minute goal drought.

The defense made crucial mistakes, too, particularly in the last two games. All in all, though, the overall performances were just not good enough.

“We have to get better, and we have to keep pushing. There’s nothing else to say,” said Red Bulls head coach Chris Armas. “Our locker room, we have standards. We have standards of excellence at our club, so we’re not happy with that. Of course we’re not, so back to work.”

Armas insisted that while there was disappointment at being eliminated in the group stage, there is also time to correct the shortcomings that were on display. He said that it was still “really early” in the year, and added that the tournament would not define the Red Bulls in 2020.

Nonetheless, the club knows plenty of work lies ahead.

“We have to take a hard look in the mirror,” said Davis. “It has to hurt each and everyone one of us, and it has to hurt us enough to change and just be better. We have to be better and we have to start by holding each other accountable and taking responsibility.”