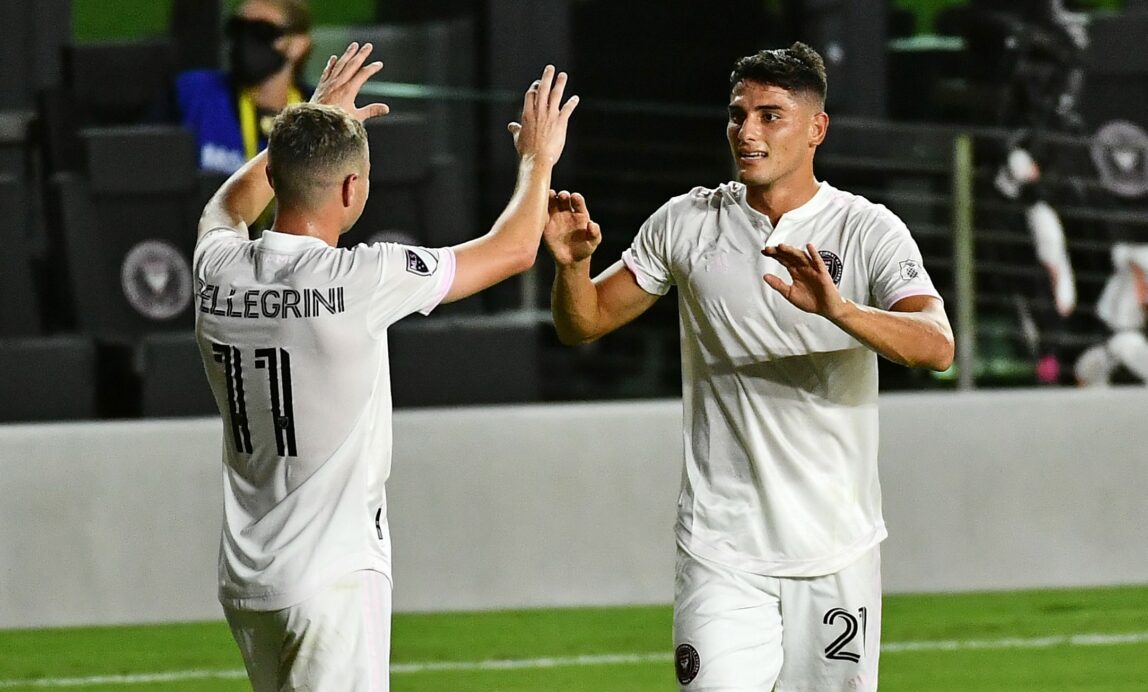 FORT LAUDERDALE, Fla. — We might just have learned one of the reasons why Inter Miami has recently considered using its final Designated Player slot on a winger rather than a striker.

Inter Miami picked up its historic first win at long last on Saturday with a 3-2 triumph against Orlando City, and one of the leading figures in the match was Julian Carranza. The young striker bagged a first-half brace to help lead the expansion side to three points, but it was more than just his first MLS goals that made him stand out.

Carranza gave Inter Miami something it had been missing to this point in the stop-start season: true No. 9 play. The Argentine used his body well to hold off defenders and draw fouls over the 90 minutes, and that combined with his vertical play, varying off-the-ball runs in the attacking half, and energy to race both forward and back made for an impressive display.

Then, there were the all-important goals, the kind Inter Miami surely was thinking of when it paid a a multimillion dollar transfer fee to sign Carranza a year ago.

“For a forward, scoring is fundamental and he was able to do it,” said Inter Miami head coach Diego Alonso. “He had the possibility to play and score. That will give him confidence, that’s oxygen for a center forward, and it makes us very happy because surely we’ll get a player going forward with a lot to give.”

This was only one game, of course, but if Carranza can keep this type of play up in the coming matches then his play will further raise the question: Should Inter Miami go after a striker or winger with its final DP spot?

While improved chemistry and cohesion played a part in the victory, so too did the tactical adjustments that Alonso made in this one.

The Inter Miami manager had his team come out in a 4-3-3 look as opposed to the 4-2-3-1 or 3-4-3 formations he has trotted out recently. The decision paid massive dividends as it allowed a number of players to better play to their strengths.

Wil Trapp and Matias Pellegrini were two players that failed to impress during the MLS is Back Tournament, but their new roles vs. Orlando City saw them deliver their best individual performances in an Inter Miami jersey to date.

Trapp was asked to sit at the bottom of an inverted midfield triangle, taking up mostly central positions right in front of the two centerbacks in Inter Miami’s defensive half. That allowed him to not only pick the ball up often from deep to help initiate attacks, but also kept the game in front of him defensively instead of having him try and cover ground to break things up, which is not his forte. 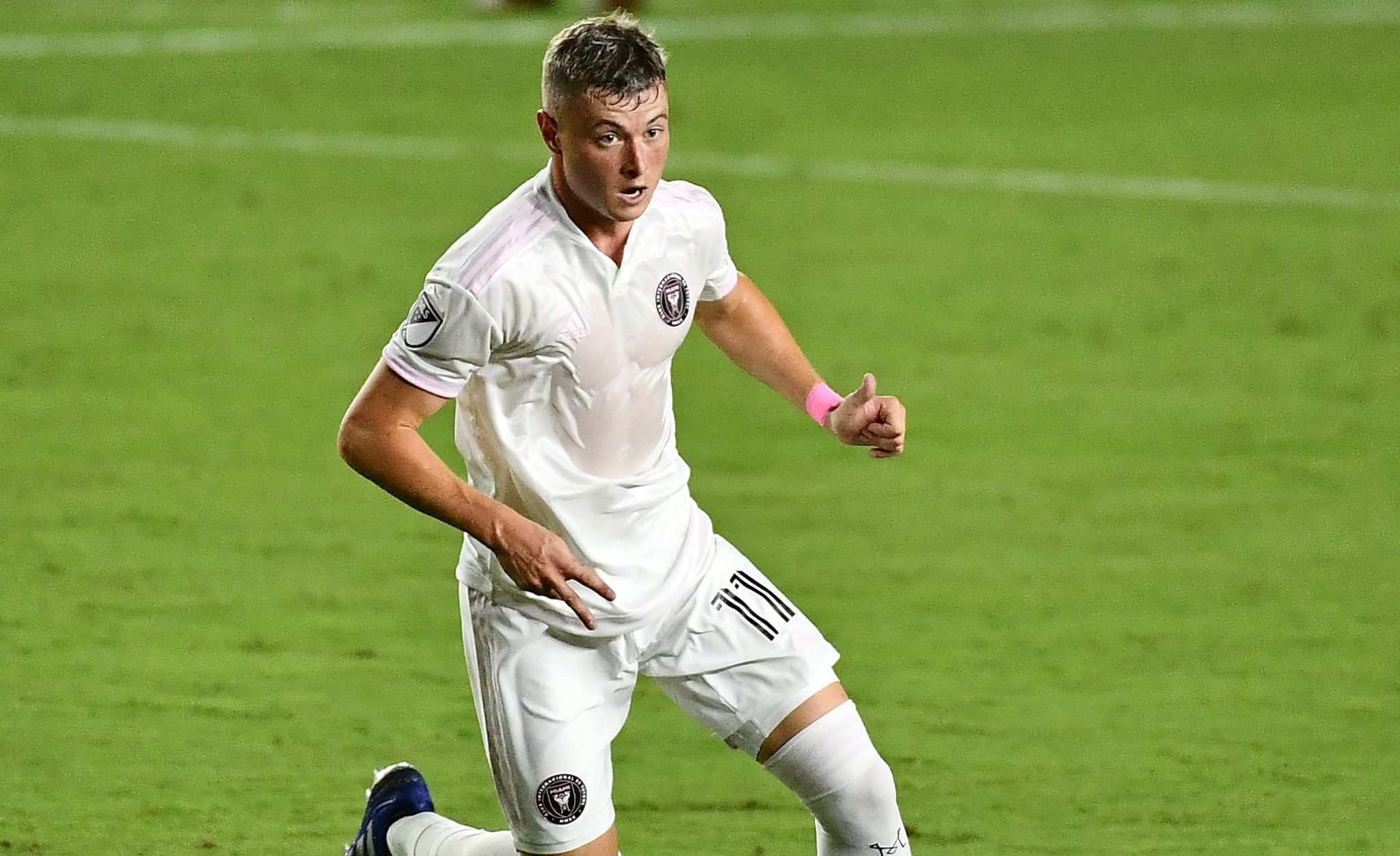 Pellegrini, meanwhile, was moved in from the wide left spot he has filled for much of this year. The Argentine served as as a double pivot with Victor Ulloa atop the midfield triangle, tasked with both helping in the build out and breaking things up defensively with his young energetic legs.

The Argentine did a good job of that, and also handled the extra bit of freedom he was given well. He drifted out wide in some moments and surged forward on the dribble in others, giving Inter Miami’s midfield some sorely-needed speed and variety.

Similar to the last meeting between these two sides, the removal of centerback Andres Reyes helped change the game in Orlando City’s favor.

Reyes, who was having a very solid game, came off in this one in the 77th minute because of another apparent injury. That forced Alonso to have to switch up Inter Miami’s formation given that the head coach curiously did not have Roman Torres as an option on the bench.

Alonso opted to move to five at the back, tucking in fullbacks Nicolas Figal and Ben Sweat to central positions that sandwiched Leandro Gonzalez Pirez while inserting defenders Dylan Nealis and Mikey Ambrose to man the flanks.

That all hurt Inter Miami, as the team ended up sitting in a deeper block that invited more Orlando City pressure before the Lions trimmed the deficit through a late Nani header.

Inter Miami ultimately held on, but it was tougher than it probably would have been had Reyes stayed on the field.

Luis Robles (5.5) — Should have done a better job of parrying Daryl Dike’s initial shot on the sequence that led to Orlando City’s equalizer, and struggled a bit with his distribution.

Nicolas Figal (6.5) — Another solid showing for the Argentine, who impressed in a return to right back by winning his defensive battles and marauding forward often.

Andres Reyes (7) — Quietly very impressive before seeming to come off with an injury, doing well with his defending and in passing through lines from deep.

Leandro Gonzalez Pirez (5.5) — While he showed a lot of the good he will bring, he was also partially at fault for the first Orlando City goal. His presence and physicality at the back were notable, though.

Ben Sweat (7) — Avoided the type of defensive mistakes that have cost him in the past, and hit the sublime cross that helped Inter Miami reclaim the lead for good.

Wil Trapp (6.5) — Tactical tweaks allowed him to play to his strengths, moving the ball accurately and keeping things in front of him defensively.

Victor Ulloa (5) — Was not bad, but was not as involved as the other two midfielders and his failure to track his runner on Orlando City’s late goal helped make for a nervier finish than necessary.

Matias Pellegrini (6.5) — The energy he brought on both sides from a central position was evident, as he pressed, passed, and dribbled plenty.

Lewis Morgan (5) — Just was not his day. Had some good dribbles down the right and hit a steady dose of crosses, but almost all were off the mark.

Julian Carranza (8.5) — His two goals were a highlight, but his hold-up play and overall performance might just have helped make him the starting striker.

Rodolfo Pizarro (8.5) — Was involved in all of Inter Miami’s goals, scored the winner, and nearly bagged a second for himself before being denied by the post.

Dylan Nealis (4.5) — Is not entirely to blame for the Lions’ late tally, though his indecision to cover just one player did not help. Nani is his boogeyman.

Brek Shea (5.5) — Demonstrated some good things in his team debut, combining well and making occasional runs forward to help see off the game.

Mikey Ambrose (5) — Buzzed about during his 13-minute cameo to keep the left flank on lock.

Diego Alonso (6) — The tactical adjustments he made to start were key in giving Inter Miami more attacking punch, but his decision to not have a natural centerback on the bench hurt Inter Miami from a tactical standpoint when Reyes had to be removed.