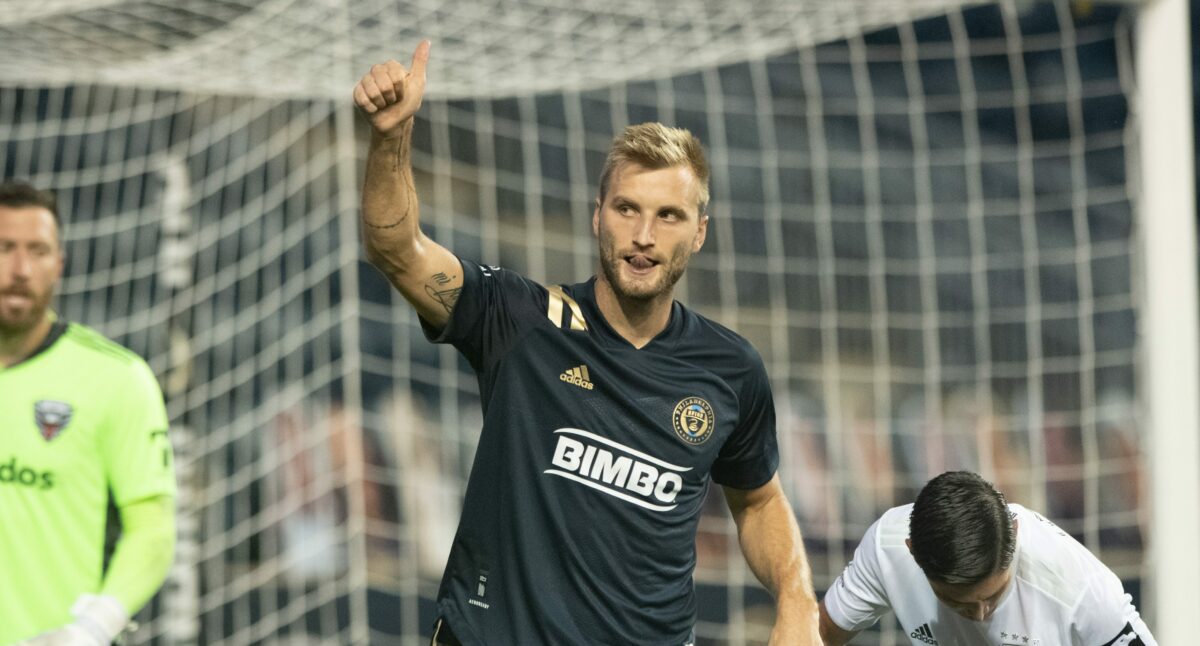 The Philadelphia Union didn’t receive much from Kacper Przybylko at the MLS is Back Tournament, but the Eastern Conference club is reaping the rewards of his good form at the moment.

Przybyłko scored twice on Saturday night at Subaru Park, helping Jim Curtin’s side to a 4-1 league win and a second over a four-day span. It may have been the striker’s first two-goal performance in 2020, but it showed a little bit of everything that made him one of the league’s top forwards in the 2019 MLS campaign.

“What that gives is confidence,” Curtin said of Przybylko’s latest performance. “Now you see he gets his second goal today off a restart, which was important, and you see his class on that finish. That’s a goal anywhere. The way he strikes that ball is clinical. Really happy for Kacper. What he does is score goals. We know that. … He played a great game tonight, he dominated and that’s what great strikers in this league do.”

Przybylko broke onto the scene last season, scoring 15 league goals and leading the Union in the club’s most impressive season in club history. He had to wait until July 15th to open his scoring account this season at the MLS is Back Tournament, which proved to be his only goal up to this week.

Despite not finding the back of the net as frequently, Curtin has stuck with Przybylko to lead the line going forward for the Eastern Conference club. After a goalscoring performance against rivals New York Red Bulls on Tuesday, Przybylko scored a goal with each foot against D.C. United while also adding an assist on the club’s fourth and final goal of the match.

It was another prime example of the Union’s depth with Przybylko taking the lead on Saturday night.

“In Orlando and in all the other games, there were other players that scored goals and it shows how much quality we have in the team,” Przybylko said. “It really doesn’t matter who’s scoring the goals. What matters the most is collecting points and recently we’ve been doing a great job of that.”

“When this team is defending as well as we have been for the past several games, the goals are going to come,” Curtin said. “They’re gonna come in bunches and they’re gonna come in waves. We have some great attacking pieces but I can tell you, our defense and our work that our forwards do defensively is what leads to the attack and what leads to a scoring goal so really proud of them for that as well.”

Przybyłko not only scored on both of his shot attempt’s in the first-half, but he set up Brenden Aaronson in the second-half for the final nail in the coffin in what dominant win. Olivier Mbaizo’s over-the-top ball was chested down confidently by Przybylko before the striker sent a pass across the box to a wide-open Aaronson, whom slid a shot past former Union goalkeeper Chris Seitz.

The 27-year-old was substituted off in the 64th minute with the Union holding a three-goal advantage with a big Eastern Conference clash approaching on Wednesday. Up next for the Union is a road clash against the Columbus Crew, whom currently sit two points higher in the conference table

Przybylko will be expected to lead the line again for the Union and look to score in his third-consecutive match for the second time in his career. The German also registered three-consecutive matches with a goal at the tail end of last season, but the confidence within the club right now you wouldn’t bet against him to reach that feat this week.

“I like how we play,” Curtin said. “I like how we compete. I like that we’re not even happy in the locker room after a 4-1 win, so that’s the sign of a good team. It’s a confident group right now. We’re a fun group to watch for fans … because we do punch above our weight a bit. But, you know, we’ll keep going. I’ll do the cliche: One game at a time.”