One year after suffering relegation from the English Premier League, Tim Ream and Fulham are back in the top flight after a crazy season in the EFL Championship. Now Ream is relishing the latest chance to play in England’s top flight and looking to help Fulham remain a consistent member of the league.

Ream and Fulham capped off a hectic period in the second tier, winning the Promotion Playoff Final over London rivals Brentford 2-1. It was the club’s first win over the Bees in its last five attempts, but ultimately got the job done in sealing promotion. After four months off from league play due to the COVID-19 pandemic, Ream is beginning to soak in everything that happened over the past 12 months.

“It’s finally starting to sink in that we will be playing in the Premier League again,” Ream told SBI. “For a few days it didn’t truly feel like it had happened especially with everything that has gone on over the last few months. I finally started to relax after a tough and grueling season and it’s starting to come to me of what we achieved this season.”

“It was a tough situation because myself and a lot of other teammates were worried the season may be voided out,” Ream said. “You start hearing new things from other sources and all while still training yourself with the plans the coaching staff gave us to stay in top shape. It took a little time to get going, but ultimately we worked hard and got to promotion which was the goal this season.”

The 32-year-old Ream remained a key member of Scott Parker’s backline, appearing in 47 league games between the regular season and playoffs. In his 10th season overseas, Ream continued his veteran leadership at the London club, helping them concede the fourth-fewest goals in the league (48).

After back-to-back league losses to Brentford and Leeds United respectively in June, it looked grim for Fulham to reach the automatic promotion places. The club didn’t hang its heads though, posting a 5-0-2 record over its next seven matches and reaching the playoff. From there they held off Cardiff City and Brentford and will be back in the Premier League after a short absence. With plenty of new faces on the 2020 promotion roster compared to the 2018 version, Ream is confident in the group to stay up permanently.

“It’s a tough division and it takes a lot out of you, that’s for sure,” Ream said. “I am 32 now so I know how much I have to work to be where I wanna be physically. Then you throw in everything that happened with the pandemic and it added even more craziness to an already crazy schedule. In the final, we played how we play and made things difficult for Brentford. We know what they were capable of, but for most of the game we played how we wanted to and got rewarded with the goals and win.”

“I feel we have a better shape and organization about us this time around,” Ream said. “Two seasons ago we had a few loan players here, but this season we had 6-7 loan players that ended up being turned into permanent deals. We knew we wanted to play defensive and make it tough for the opposing team. It’s a different style than when Slavisa [Jokanovic] was in charge, but I loved playing under his style too.”

Ream has not only been able to play with talented teammates, but has been able to work with a former teammate in manager Scott Parker. Parker took over on an interim basis in March 2019, but ultimately couldn’t help the club avoid relegation from the Premier League that season.

Club owner Shahid Khan kept his faith in Parker and retained him as the manager going into the 2019-20 season. Parker, a former 23-year player with several EPL clubs, played with Ream for two seasons before getting into managing. Ream credits Parker for the club’s immediate bounce back to the Premier League and has enjoyed the time playing under his guidance.

“Working with Scott has been a great experience,” Ream said. “I got to play with him for two seasons here at Fulham and then he became coach and was able to get us back into the Premier League. It’s an amazing achievement for someone to earn promotion in their first full season as manager and Scott has definitely worked hard to get where he is today. He has a wealth of experience and I am always trying to learn from him and take new things in.”

Not only has Ream remained a consistent member of the Fulham squad, but he’s also returned to the USMNT fold under Gregg Berhalter. After earning 26 caps up to 2019, Ream made 14 appearances for the USMNT in Berhalter’s first yearr as head coach, appearing as both a centerback and left back.

Despite several young talents knocking on the door of the first team, Ream will continue to fight for his future opportunities with the USMNT and is excited about the future of the program as a whole.

“It’s been good to work with Gregg and learn from him,” Ream said. “He’s a former defender himself so it’s good to talk with him about certain things and different plays to make on the field. I always enjoy being able to come into the National Team and will always want to get the chance to be there if they want me to be.

“It’s truly exciting to work with a lot of these younger guys,” Ream said. “It’s funny seeing them playing video games or always on their phones outside of practice, but when they step on the field it’s all business. Players like Christian [Pulisic], Weston [McKennie], and Tyler [Adams] are the future of this team and are playing for big clubs in Europe. It’s good to see the numbers rising of American players here and I think it will only help the program going forward.” 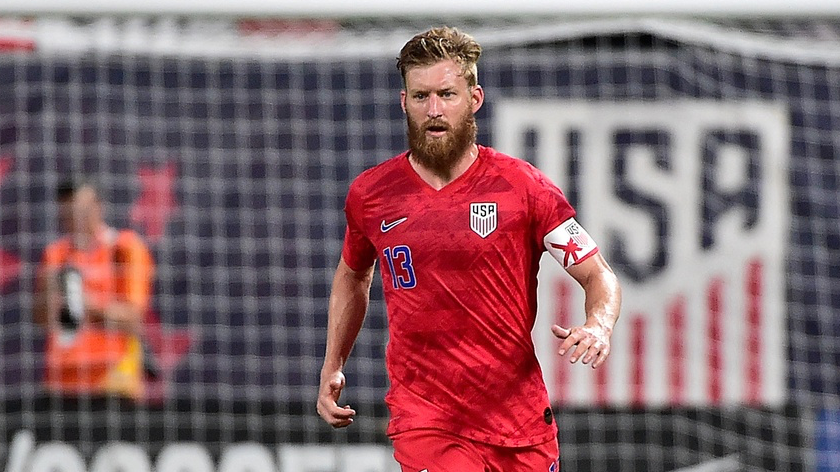 Ream has yet to play in a World Cup for the USMNT after not being included in the 2014 roster. He made six appearances during the team’s failed qualifying campaign for the 2018 World Cup, which he would have had a good chance of playing in if the Americans had qualified.

With a good mixture of youth and experience in the current pool, Ream admits the only goal for the USMNT going forward is qualifying for 2022.

“Of course [qualifying is the main goal],” Ream said. “Anything else is a good stepping stone for us, but we have a good enough squad to be at the World Cup and I think the goal will be to qualify every time.

“We know that we let the country down in 2018 and are always trying to get better as a group when we have camps,” Ream told SBI. “I am excited with the group we have now and with new players coming in and I think once we get some friendlies going again we can get back into what we started at the end of 2019.”