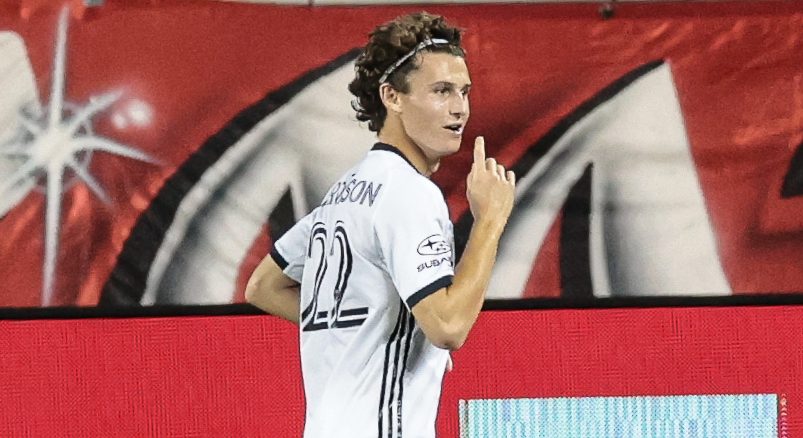 The Philadelphia Union rebounded in the best way possible on Sunday night with a lopsided win over rivals New York Red Bulls, but the focus was on one of the club’s rising stars in the romp.

Brenden Aaronson scored for Jim Curtin’s side in a 3-0 road win, the Union’s first at Red Bull Arena since 2015. Aaronson’s strong second season for the Eastern Conference club continued with his best goal in the blue and white of the Union’s colors.

“It’s not often that you come into this building and take points,” Curtin said. “Obviously a 3-0 win has to rank above our best performance ever here. We knew the beginning of the game would have a lot of emotion to it. The first 15 minutes would be chaotic and we would have to navigate that. But overall, I thought our players sustained the chaos that Red Bull is great at creating.”

Aaronson’s first-half goal set the tone for what ended up being one-way traffic after halftime. The 19-year-old midfielder picked up possession and ripped a right-footed shot into the left corner of the Red Bulls goal. It was a confident strike from Aaronson, who continues to be one of the top players for the club.

“Brenden Aaronson obviously finds a good pocket in what we call the green zone and obviously the shot he hits is a special one,” Curtin said. “I was mad at him because he was in that green zone a couple times earlier and his first touch let him down. But overall now to finish that one from distance is something we’re proud of and all the hard work he’s put in in front of goal is paying off for him and our team. He deserves the credit there.”

Aaronson logged 77 minutes in the match before being replaced by fellow Homegrown midfielder Anthony Fontana. His only shot on goal ended up being the winner for the Union, but the creative midfielder also tried several other times to set up his teammates.

The U.S. Men’s National Team player has been linked with a move away from the Union this year with several European clubs interested in his services. Aaronson now has six goals and four assists over his season-and-a-half with the Union and could very well reach no career highs before this campaign is over. After his latest goal for the club, he aims to continue working on his finishing and most importantly becoming an all-around top No. 10.

“There’s been a lot of work in my final third and I think that I give myself a lot of credit because after training I’m always getting that ball from Ale, we’ve worked on that a lot recently and I was in the green zone and made up my idea, decided to shoot,” Aaronson said. “I need to shoot more, I think people see that. I shot it and I scored and I was really proud of myself for that.”

“In my head when I saw [that ball crossed] there was only one thing in my head, and that was to shoot it. That’s what I want to keep doing, I want to keep working on it because I think a great No. 10 has that goal-scoring capability. I want to keep adding that to my game and keep shooting whenever I can.”

With Aaronson getting on the scoresheet, it helped the Union bounce back from a missed opportunity four days prior in Columbus. A 1-0 loss to the Crew saw Caleb Porter’s side jump into the top spot in the East while the Union stayed in third.

Since then, the Union moved up to second place and have a strong possibility of fighting for the No. 1 seed come playoff time. Up next is a home date with the New England Revolution, a team the Union beat once in the MLS is Back Round of 16 and tied 0-0 back in Foxborough in its first regular season match back from Orlando.

“Overall, I am really proud of this team,” Curtin said. “Everyone is contributing, guys came off the bench and made a big impact on the game, and that’s what happens on good team. Proud of everyone for the three points.”