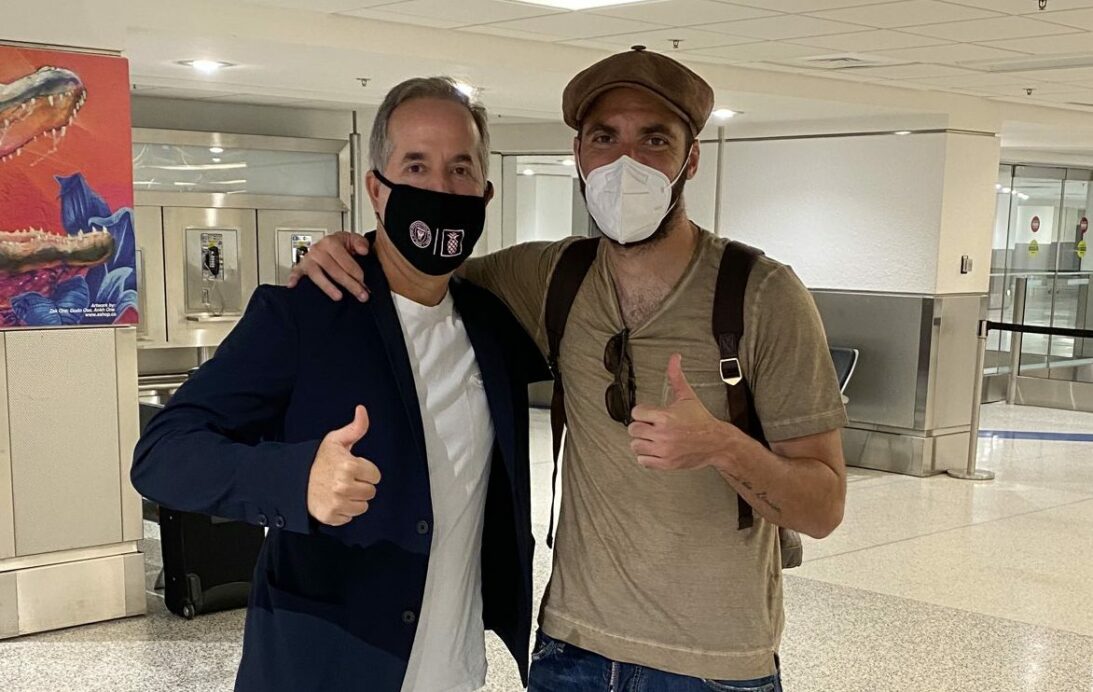 Gonzalo Higuain is in South Florida, but he is not officially an Inter Miami player just yet.

Higuain traveled to Miami on Thursday night and headed to Inter Miami’s practice facility on Friday for required formalities before signing an expected deal with the expansion club. It is anticipated that the Argentine striker will officially ink his new contract over the weekend, especially after team co-owner Jorge Mas tweeted a photo of him and Higuain together early on Friday.

“As you know, he’s here in South Florida and he’s here in Miami,” said head coach Diego Alonso in Spanish late Friday afternoon. “He’s undergoing medical exams and is in the final negotiations with the club. Hopefully they can be finalized in these comings days so that he can be with us.”

Diego Alonso may not have wanted to say much about Gonzalo Higuain today, but he probably said plenty to him. 🇦🇷🇺🇾

📸 Here’s an image that was sent to me of the two chatting at Inter Miami’s training facility earlier today. #InterMiamiCF #MLS pic.twitter.com/MGO5Qz9HYb

Alonso would not go into details as to what he thinks Higuain will bring to Inter Miami on the field, saying it “is not the moment” to expand on comments about the forward’s skill set. The Uruguayan manager did, however, mention that Higuain’s looming introduction will benefit the club in more ways than one.

“Having players come with experience will have an impact on the team, without a doubt,” said Alonso. “… It’s double the benefit that we have with (Blaise) Matuidi and with Gonzalo, if he can sign with us, to have two players that can help us in the style of play and at the same time help the development of the younger players.”

Gonzalez-Pirez will travel and play in the latest edition of the Sunshine Clasico, though.

“I spoke to him all morning, but I had another conversation with him just a few minutes ago,” said Alonso. “Everyone is doing well, and he will be available for selection in tomorrow’s game vs. Orlando.”

Gonzalez-Pirez has started and gone the distance in each of his five appearances to date for Inter Miami.

Eager to play in front of fans again

Due to the ongoing pandemic, the match at Exploria Stadium in Central Florida will mark the first time since March 7 that Inter Miami will play in front of some of its fans.The South Florida side has not been able to welcome supporters to its own home venue due to ongoing safety regulations, but a few hundred Inter Miami fans are expected to make the trip up to Orlando.

For Inter Miami, that is beyond exciting.

“It feels awesome,” said rookie right back Dylan Nealis on Friday. “I think we’ve all been dying for them to come into the stadium. I know (in) each of the home games they’re all chanting outside the gate. They almost want to rush in.

“It is going to be exciting. Hopefully as many of them can travel up to Orlando as possible, and I think it will only make the game more fun to watch. It’s just going to be great to be there.”