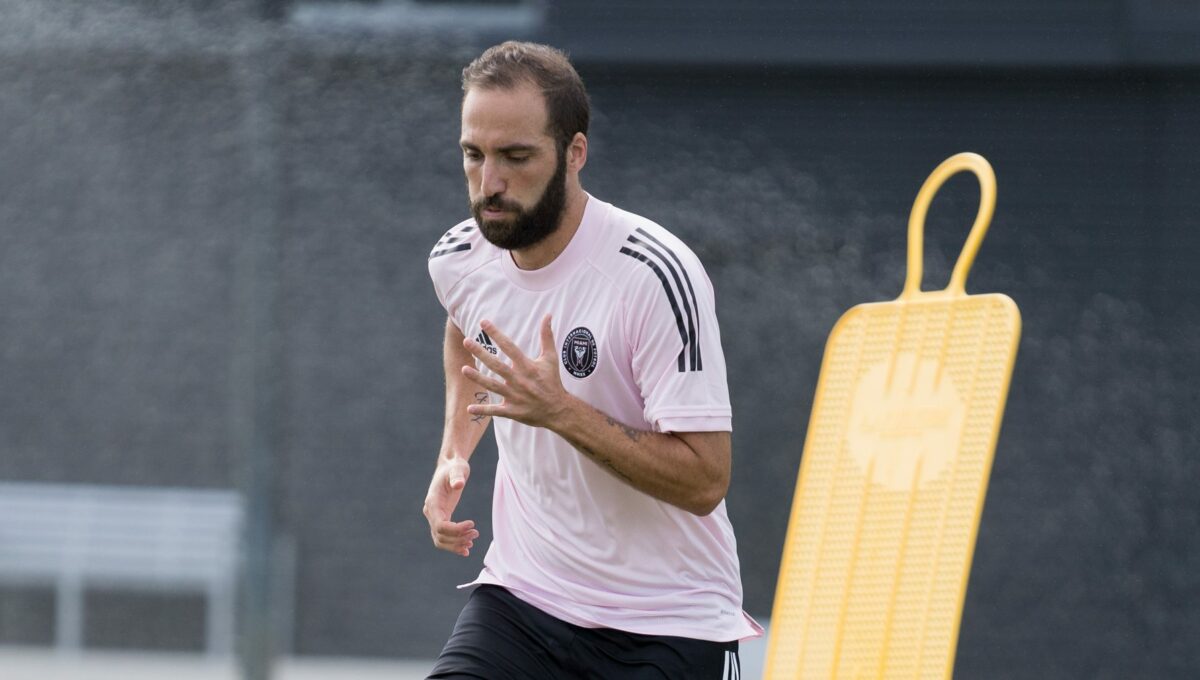 Gonzalo Higuain’s status for this weekend remains unknown, but Inter Miami plans to include him in the match-day roster if he can get clearance to play.

Two days separate Inter Miami from its road game against the Philadelphia Union, and there is a chance Higuain could play in the Eastern Conference bout at Subaru Park on Sunday. The star striker that officially signed with the expansion side exactly a week ago is still awaiting his visa situation to get sorted and cannot debut until that is completed.

Still, Inter Miami plans to have Higuain involved if he can get the green light before the team flies to Philadelphia on Sunday morning.

“He already knows his teammates. He has had a lot of training sessions with them,” said head coach Diego Alonso in Spanish on Friday afternoon. “We have interacted in different exercises, we have spoken a lot about the style of play, we have watched videos, and we have worked infinitely.

“If he is available for Sunday, then of course he will travel.”

Here are more news and notes from Inter Miami camp:

Inter Miami has quite the dilemma regarding Rodolfo Pizarro and the Mexican national team right now.

Mexico wants to call Pizarro up during the upcoming international window in October, but Inter Miami does not want to release the midfielder given that he would miss multiple games as the MLS side tries to secure a playoff spot during the stretch run of the season.

It is currently unclear whether clubs will be forced by FIFA to release players for friendlies such as the one Mexico has scheduled vs. the Netherlands in Europe on Oct. 7, but Pizarro prefers to want stay with Inter Miami this time around.

“Clearly one always wants to be with the national team,” said Pizarro in Spanish. “It’s the most wonderful thing you can have as a player, but it’s complicated because you would lose out on so many games and we are fighting to qualify.

“I know it has been a difficult season and I side with the club and know it is difficult to let me go and miss out on four games. I want to go, but it is a difficult decision.”

Pizarro — who added that he will be 100 percent healthy for Sunday’s match against the Union after coming off the bench on Wednesday — has started in 11 of 13 games for Inter Miami this year. He has been the expansion team’s most productive attacker to date, scoring three goals and dishing out four assists.

“We’ll continue having conversations with the Mexican federation, of course with each side looking out for their best interests,” said Alonso. “The national team wants to count on him and we want to count on him, too.”

Figal: I have to give more at right back

Nicolas Figal has proven to be versatile this season. He has played centerback and right back, beginning the campaign as a starter in the former position before being used in the latter and holding up well in both spots.

Figal stated on Friday he prefers to play in central defense like he did in this past Wednesday’s loss vs. the New York Red Bulls, but that he is fine with continuing to play mostly at right back if that is what is best for Inter Miami. What’s more, Figal added that he thinks he can still perform better out wide.

“Obviously, every player feels most comfortable in their more natural position, which in this case is at centerback,” said Figal in Spanish. “But if Diego needs me (at right back) in this moment then he can count on me because if the team needs a helping hand there then I’ll do it.

“My analysis of my performance is that I know I have to give a lot more and I know I can do it. Maybe I haven’t found my top level yet and the one I wanted, but we’re here to improve and to continue trying it.”