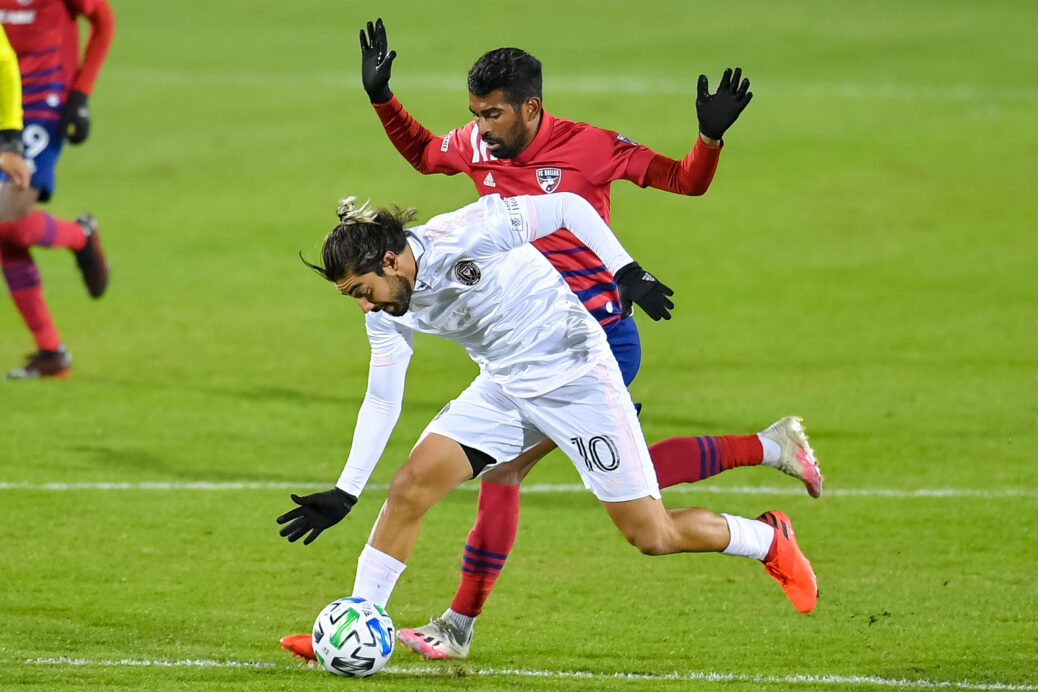 Diego Alonso reiterated his stance on Wednesday night that he will “never” use the referee as an excuse. Inter Miami’s head coach, however, also pointed to the controversial penalty for why the game changed for the worse for his side.

Inter Miami had to swallow another bitter pill after allowing a lead to slip away in a 2-1 road defeat to FC Dallas on Wednesday. The expansion side initially took the lead after 33 minutes off a composed finish from Rodolfo Pizarro following a great through ball from Gonzalo Higuain, but a pair of goals after the break doomed Inter Miami to its 12th loss of the season.

The first of those two FC Dallas tallies came from the spot at the hour mark after Leandro Gonzalez Pirez was called for a questionable foul on Bryan Reynolds, who may have already been going down before contact was made.

Having started the match with its usual high press, Inter Miami opted to switch things up and play more defensively after Pizarro found the back of the net. Alonso admitted that his team’s goal came at a time in which FC Dallas was enjoying its “best moments” in the game. The Western Conference side was moving the ball well and creating danger during the opening 30 minutes, coming close to scoring on a few occasions before Pizarro struck.

Alonso subsequently made the decision to drop his lines to try and make for a more organized and compact defense that could protect the lead by better counteracting FC Dallas’ ability to penetrate and generate chances.

“The team controlled much better, defended much better. It was difficult for us at times to hit on the counter, or when we had the counter we lost the ball too easily, too simply. There were easy passes to give, simple triangulations to do, and we ended up losing the ball and that weakens you.”

Not everyone on Inter Miami agreed with that tactical decision, however.

“I think we started the second half in a low block and I think we stayed in a low block the majority of the second half and we just invited a lot of pressure with that,” said left back Ben Sweat. “They got a lot of crosses off. Sitting back like that, you’re going to invite that kind of pressure. I think we were sitting a little too deep, and they have good players who can make plays and that’s just what happened.

“We’ve got to be better with some little bit of positioning and details, which make the biggest part of the game.”

What added salt in the wound for Inter Miami on Wednesday night was that other teams underneath the South Florida side in the standings in the east lost their respective games. Yes, that helped Inter Miami stay above the red line in the 10th and final playoff spot, but the club missed an opportunity to create separation going into the last two matches of the year.

Alonso said after the frustrating loss to FC Dallas that he had not been doing any scoreboard watching on Wednesday, but Inter Miami will need to keep tabs somewhat on how things play out the rest of the way. The 11th-placed Chicago Fire are even on points with Inter Miami right now, and have a game in hand. If the Fire win out, things can get very difficult for Alonso’s squad.

That said, Inter Miami is concentrating largely on itself.

“We have two more games and we’ve got to get results and get points these next games to stay above the line,” said Sweat. “Hopefully these other teams can help us out a little bit. I think we deserve a little bit of luck at the end of the day, (but) we just can’t worry about that and we’ve just got to focus on Toronto now.

“Get a result in Toronto and then come home and play the final home match of the regular season vs. Cincinnati and get another result.”