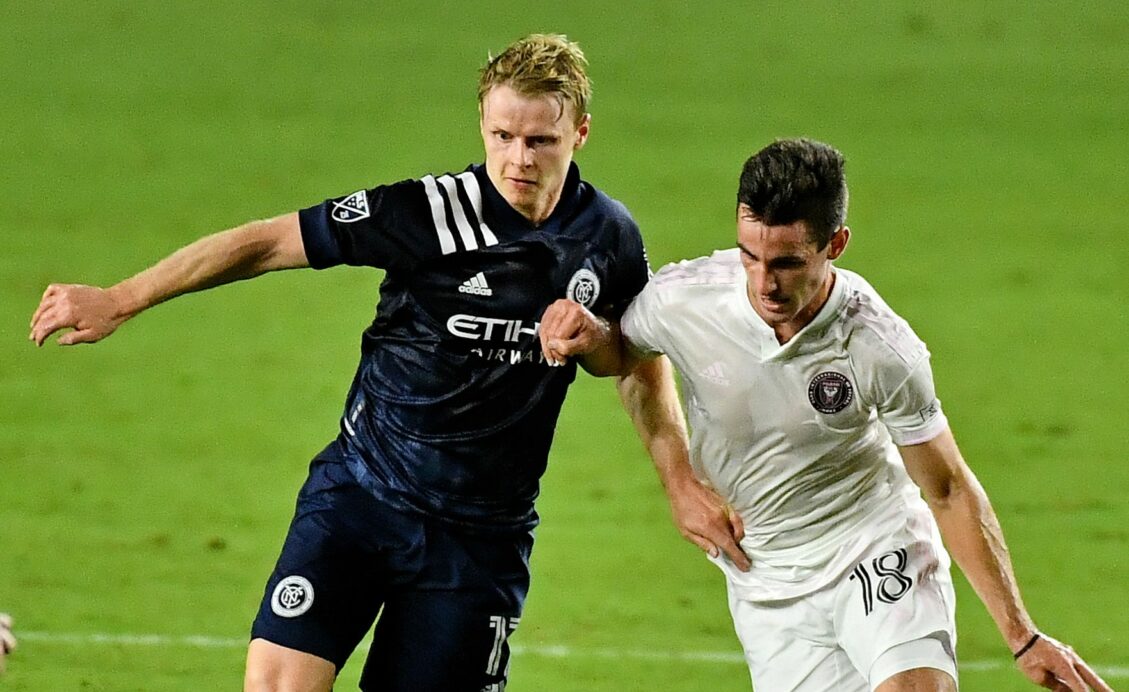 Diego Alonso may not have wanted to pin Saturday’s issues on his team’s collective defensive performance, but they were defensive mistakes nonetheless.

Inter Miami fell to its 10th defeat of the year on Saturday night, with familiar problems at the back proving fatal in a 3-2 home loss to New York City FC. Alonso immediately chalked up the goals conceded to individual errors and lapses in concentration rather than collective problems, but those gaffes are still defensive issues.

The troubles started early vs. NYCFC, as Inter Miami gave up an opener four minutes in after failing to properly track Alexandru Mitrita on a cross from deep following a free kick. A.J. DeLaGarza shouldered some of the blame for not properly getting back into his right back position as Inter Miami tried to clear, but right midfielder Lewis Morgan admittedly after the match that he could have tucked in as well to help prevent the free run that allowed Mitrita to finish from close.

DeLaGarza was also partially at fault for the third goal, which was eerily similar to one Inter Miami gave up to the Philadelphia Union at the MLS is Back Tournament. A corner kick in Inter Miami’s favor came back the other way, with DeLaGarza’s initial charge at the ball allowing Mitrita to have just enough space to break free and score off a deflection. Ben Sweat is also a bit responsible here, though, given that he never stepped up to press the NYCFC attacker.

Mitri takes it the distance to restore our lead just before halftime 💨 #NYCFC pic.twitter.com/pBnkicaVjd

As for the second tally, it was another case of no one stepping up to apply pressure. Anton Tinnerholm was able to dribble his way forward under little duress, and, with so much time and space, picked out the bottom left corner with ease.

Inter Miami has now given up 10 goals in its last three matches, a defensive output that is surely a far cry from what Alonso is looking for from his side.

If there was one positive in this one, it was Lewis Morgan’s finishing.

Morgan bagged his second brace of the season to give Inter Miami a fighting chance vs. NYCFC, and both of his goals were of the impressive variety. His first was a confident and strong, cross-body finish to the far post while his second was fired perfectly into the top corner of the goal where the spiders make their webs.

The Scottish winger had said back in August before the resumption of the MLS regular season that he wanted to begin to rack up goals and assists, and he is beginning to make good on that. Morgan now has four goals on the year, which makes him the leading scorer on Inter Miami right now ahead of the likes of Rodolfo Pizarro and Juan Agudelo.

There are, of course, things for Morgan to work on, including cleaning up his first touch so that he can head towards goal more often instead of straight down the flank. It is what Gonzalo Higuain seemed to say to Morgan when celebrating his second tally.

That would allow Morgan to have even more looks on goal, which would likely produce even more of the type of finishes that he produced on Saturday.

Lack of impact from subs

One thing that hurt Inter Miami in this one was the inability to get much from its substitutes.

Alonso made four personnel changes during the course of the second half as Inter Miami searched for an equalizer, but none of the players that entered the game really impacted proceedings. Matias Pellegrini was the one that stood out a bit above the rest because of how lively he was and how often he got on the ball to try and make things happen, but he was not that sharp with his passing and even committed a needless hard foul high up the field with a late challenge.

The other three substitutes provided less. Dylan Nealis and Brek Shea did not bring much to the attack during their times on the field — Nealis also got beat badly on one defensive play before Robles made a big save — and Julian Carranza saw precious few minutes to ever really get going. Even then, he wasted a would-be equalizer late in the match by being poorly positioned and offside.

This loss is not on the substitutes, but they definitely did not help much.

Luis Robles (6.5) — Came up with two tremendous stops, and could do little else on the three goals.

A.J. DeLaGarza (4) — Had some good moments getting forward, but was directly involved in two of the three tallies given up.

Nicolas Figal (6) — Solid defensively and overall precise with his passes, though most of them were of the safe variety.

Leandro Gonzalez Pirez (5.5) — Involved in a lot of physical challenges in this one, leading to the yellow that rules him out of Wednesday’s match.

Ben Sweat (4.5) — His failure to step and press Mitrita on the winner proved fatal, and he wasn’t as big of a threat going forward as he normally is.

Wil Trapp (6) — Helped set up the second equalizer and moved the ball accurately and quickly as the anchor of an inverted midfield triangle.

Victor Ulloa (6) — Showed great awareness in flicking the ball to Morgan on the first tying goal, and put in his usual work defensively.

Blaise Matuidi (6) — Was good in combination play in this one, as evidenced by his entry pass to Ulloa on the first tying goal.

Lewis Morgan (7) — Could have done a better job defensively on the early opener, but scored two impressive goals and was the biggest attacking threat.

Gonzalo Higuain (5.5) — Needed to put away his glancing header in the second half, but had good hold-up play and nearly set up a late equalizer.

Rodolfo Pizarro (6) — Better in the second half than the first, as he began to take control of the game more by getting on the ball often to hit a range of passes.

Matias Pellegrini (5) — The liveliest of Inter Miami’s subs. Lacked accuracy with his passing and committed a needless foul, though.

Dylan Nealis (4) — Bailed out on one play by a great stop from Robles, and did not do much in the attack.

Brek Shea (4.5) — Struggled to connect with his passes during his 19 minutes and did not contribute much going forward.

Julian Carranza (4.5) — Should have had a goal but was ruled offside by Video Review due to poor positioning, negating the late would-be equalizer.

Diego Alonso (4.5) — His side was not poor from the run of play, but familiar defensive issues popped up again and none of his subs made an impact.