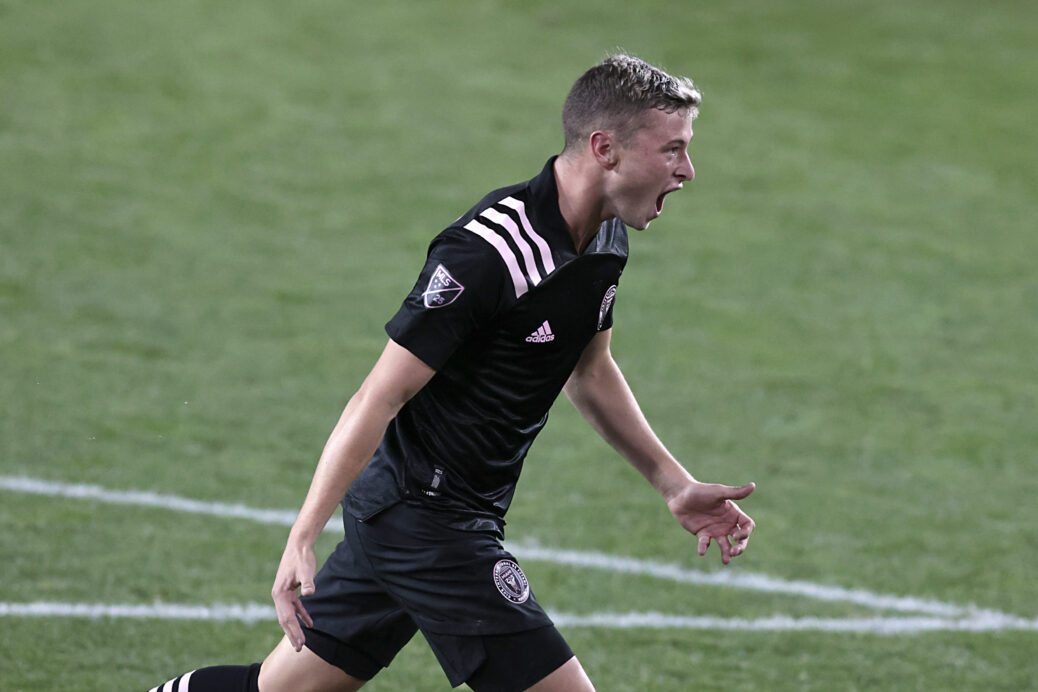 The spotlight might currently be firmly entrenched on Gonzalo Higuain and rightly so, but it should make its way over to Matias Pellegrini at some point.

Inter Miami snapped a three-game losing streak with Wednesday night’s 2-1 triumph over the New York Red Bulls, and one of the marquee figures in the historic come-from-behind win was Pellegrini. The young Argentine may not have opened his account by scoring a golazo off a free kick like Higuain, but he did initiate the rally with his long-awaited first Inter Miami goal early in the second half.

“This goal has given me a lot of confidence, but more importantly was the confidence that head coach Diego (Alonso) and my teammates gave me before the game,” said Pellegrini in Spanish. “It has been difficult for me because this is all new for me. I’m still a young guy that is adapting to this new league and this whole new life, which I’m not used to.

“It has been complicated, but luckily I’m adapting thanks to the help of my teammates, the technical staff, and the entire club.”

The ball from Morgan.
The confident finish.

As is the case with Higuain, Pellegrini’s 55th-minute goal will be the most talked about contribution from the youngster’s shift vs. the Red Bulls. The 20-year-old attacker did more than score off a nice half-volley, however.

He was active and engaged on both sides of the ball during his 95 minutes on the field, looking far more confident and sharp than he has for much of the season.

“Matias is a special case because he has fought all year to stand out,” said Alonso in Spanish. “He’s a young guy who is experiencing moving abroad for the first time. He lives alone, he has the pressure of being a Designated Player for us, and has suffered a lot.

“I think he’s worked to be able to perform how he did today and I think he deserves this moment. We’re very happy with his level today and, most of all, hopefully he can regain the confidence that allowed him to get here more than a year ago.”

Pellegrini is wishing for the same.

“I hope this is the first step,” said Pellegrini,  “and that  this will give me confidence to begin scoring goals and helping the team from this point forward.”

Figal a stud at the back

If Higuain was the best Inter Miami player on the field on Wednesday night, he only edged out Nicolas Figal by the slimmest of margins.

Figal was an absolute rock at the back for the expansion side vs. the Red Bulls, and a big reason why the team was able to collect three sorely-needed points. The centerback anchored a makeshift defense that included rookie Dylan Nealis and the fledgling Christian Makoun, and was heavily involved in cleaning up numerous plays in the penalty area.

Of course, the eyes can easily overlook defensive work given that it is not as sexy as attacking plays, goals, and assists. That said, the stats paint a clear picture of just how dominant Figal was: two blocked shots, a whopping 10 clearances, and a team-high 70 touches.

Also of note and something a bit more aesthetically pleasing was that the veteran delivered the precise initial ball to Higuain from the back that helped set up Inter Miami’s equalizer. Higuain and Pellegrini may have provided the goods in the attacking end, but it was a third Argentine that did so on the other side of the field.

Before Higuain took matters into his own hands and hit that ice-cold free kick in the 81st minute, Inter Miami was looking like it would go a 16th consecutive match without scoring directly off an attacking set piece.

Of course, that did not happen thanks to that moment of magic from the star striker. However, you cannot depend on Higuain to score off dead-ball situations every game, which is why Inter Miami needs to figure out a way to improve its set pieces once and for all.

Lewis Morgan has been the free kick and corner kick specialist up to this point in the campaign, and maybe Higuain would not have stood over the ball and shot had Morgan still been on the field to cross it in. Regardless, either Inter Miami needs to give someone else the dead-ball duties or come up with more variety in how they are taken.

The closing minutes of the first half highlighted this problem greatly. Inter Miami won a series of corner and free kicks down the right side in quick succession, and all the South Florida side did was whip in cross after cross without so much as threatening the Red Bulls’ goal.

Inter Miami should really begin to consider playing those balls short as an option or Alonso could put more time into coming up with trickier designed plays from the training ground to help unlock defenses. Either way, that facet of the game needs to improve.

John McCarthy (5.5) — Quick off his line and made one very good save early, but was also bailed out by Matuidi’s goal-line clearance in the first half.

Dylan Nealis (6) — Had a number of good defensive interventions, including several off set pieces.

A.J. DeLaGarza (6.5) — Blocked a dangerous Red Bulls opportunity early, and was quietly solid with his positioning and defending throughout.

Nicolas Figal (8) — A stud at the back. Never set a foot wrong, regularly put out fires, and hit the nice initial pass that led to the equalizer.

Christian Makoun (3.5) — Shaky from the onset and the Red Bulls realized that. Struggled with his touches, was pickpocketed twice, and lacked confidence.

Ben Sweat (4.5) — At fault for a goal yet again, which overshadowed his good attacking moments and the combination play he had with Higuain.

Wil Trapp (5) — Played a smart game tactically, but like many of his teammates was not accurate with his passing vs. the Red Bulls’ high press.

Blaise Matuidi (6.5) — His defining play was the goal-line clearance in the first half, though he moved the ball well too en route to finishing with an 80 percent pass completion.

Lewis Morgan (6) — Moved centrally at times to help open spaces and hit a great cross on the leveler. His removal in the second half and ensuing lack of exchange with Alonso should raise some eyebrows, though.

Gonzalo Higuain (8) — Put the team on his back when it needed him the most by setting up the tying goal and scoring a golazo that will not soon be forgotten. His passes to wide spots were pretty good, too.

Matias Pellegrini (7) — Was much sharper and engaged than he has been in most matches this year, and scored a well-taken goal to bring the team level.

Victor Ulloa (5) — Entered the match to help close it out, and did just that with his share of grit and hustle.

Julian Carranza (5) — Helped kill off time with and without the ball after being brought on to provide fresh legs in place of Higuain.

Robbie Robinson (N/A) — Came into the game in the 95th minute as an injury replacement for Pellegrini.

Diego Alonso (7) — The first half was not great, but his overall approach with a makeshift back line worked well and the team improved in the attack when he had them play more long and direct. His decision to remove Morgan was peculiar, however.