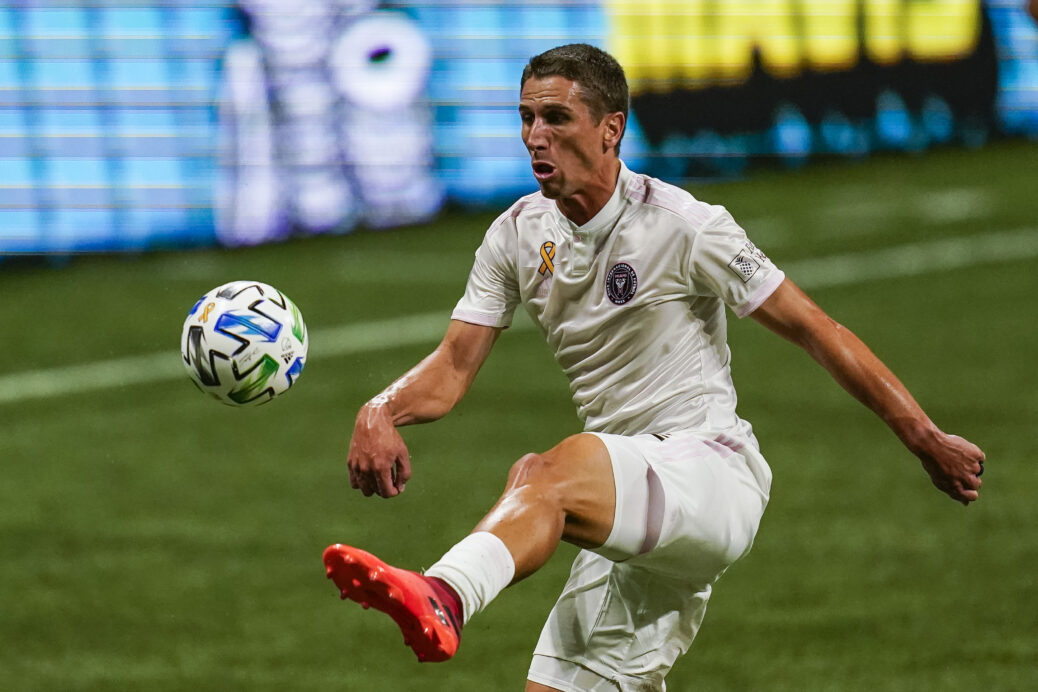 Ben Sweat has been directly involved in several of the recent goals that Inter Miami has conceded, but head coach Diego Alonso’s belief in the left back remains high.

Alonso gave Sweat a vote of confidence on Friday afternoon, a little over 24 hours before Inter Miami faces off against the Montreal Impact in a crucial Eastern Conference match. The Uruguayan manager touched on the multiple mistakes Sweat has had in the last few games, including in Wednesday’s frustrating draw 1-1 with Atlanta United, but still spoke positively of the American fullback.

“He’s had some issues and been involved in some goals, but I think errors are part of the game and part of an everything,” said Alonso in Spanish on Friday. “When one player makes an error, the error is also of the entire team and the head coach. I think on the balance he has improved as the year has gone on. Maybe in the beginning he had a shaky start to the season, but then he settled and has had very good games.”

Alonso added that he thought Sweat’s most recent outing vs. Atlanta United was a good one, even if the veteran defender was partially to blame for the late equalizer Inter Miami conceded. Alonso touched on the attacking aspects Sweat provided in the stalemate, and also stated that the breakdown in the 83rd minute was about the collective as much as it was about any individual.

The vision and the finish 👊 pic.twitter.com/FzgFBYlOzZ

“I think, at least to my understanding, he had a very good game last game,” said Alonso. “Yes, maybe he is involved in the goal given up because he could have followed his runner on the wall pass at midfield, but there were also some other things that happened at the back. It’s just something that happened from the run of play. It’s not an error that happened in the penalty area but rather at midfield.

“I think he had a good game. He helped the team, he generated play and attacks, he had chances, he had shots, he delivered crosses. I think it’s about giving him more confidence and helping him defend better. Like in tennis, it’s about not committing unforced errors. That’s just part of the team, and something we have to fine-tune.”

Inter Miami has been without star attacking midfielder Rodolfo Pizarro for the last three games, but his return is looming. Pizarro will not be available for Saturday’s clash with the Impact due to the mandatory quarantine period he has to satisfy after playing internationally with Mexico, but should be cleared in time to take part in the Oct. 24 edition of the Sunshine Clasico vs. in-state rivals Orlando City.

“We expect to count on Rodolfo for the following game,” said Alonso. “He will work this next week to try and arrive for that game.”

Alonso also gave updates on his notable injured players, goalkeeper Luis Robles and centerback Andres Reyes. Inter Miami has not officially declared Robles as out for the season after he suffered a fracture in his left arm earlier this month, but Alonso said the American netminder is unlikely to play again in 2020. Reyes, meanwhile, may be back as early as next week vs. the Lions.

“Robles, as everyone knows, had a surgery and that takes a prolonged period (to recover from),” said Alonso. “We don’t know exactly how long that will take, but we do know that it will be very difficult to count on him this season. That’s the reality.

“With regards to Reyes, we think there are also possibilities that he can be available for the game vs. Orlando. Hopefully we can count on him and that will he be able to play in the match.”

Morgan reveals Scotland’s desire to call him up

Lewis Morgan’s run of good form with Inter Miami has not gone unnoticed. Morgan revealed on Friday afternoon that Scotland national team head coach Steve Clark has wanted to bring the productive winger back into the fold at the international level, but that it has not been able to happen due to ongoing issues surrounding COVID-19.

“I was called up in the previous squads, but I have been unable to travel with the coronavirus situation,” said Morgan. “…Hopefully I can join up with them soon.”

Morgan, who has previously earned two caps with Scotland, is enjoying a good first season with Inter Miami. He is one of only two players to start in every match this year, and currently leads the MLS team in both goals (five) and assists (six).