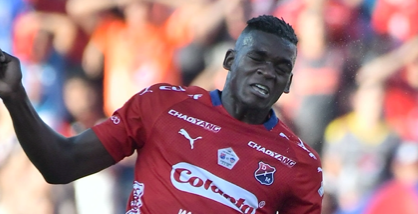 LAFC’s defensive additions continued on Wednesday with another loan signing to its backline.

Colombian defender Jesús David Murillo signed with the Western Conference side on loan through the 2020 MLS regular season. There is also an option to exercise a permanent transfer from Colombian side Deportivo Independiente Medellín.

“As a Club, we are always looking at ways of improving our roster and we believe that acquiring a player of Jesús’s caliber will do just that,” said LAFC Co-President & General Manager John Thorrington. “He has fantastic physical qualities that fit how we play and will provide a commanding presence across the backline. We are excited to have him with us and expect him to make an immediate impact as we continue our playoff push.”

Murillo will occupy an international roster spot on LAFC’s roster and will join the team following a mandatory quarantine period. He appeared in 18 matches across all competitions for Independiente Medellin, scoring two goals in Copa Libertadores play.

He joins Mark Segbers as the latest defensive reinforcement this week.

The Montreal Impact will need to rely on other players to step up in production for a place in the MLS Cup Playoffs.

Wednesday saw the Canadian club transfer Designated Player and midfielder Saphir Taïder to Saudi Arabian side Al Ain FC. Taider registered four goals and six assists in 11 matches this season, but will now take his talents to the Middle East.

“The club would like to thank Saphir for his three seasons in Montreal and everything he’s accomplished on the field,” said Impact sporting director Olivier Renard. “An opportunity presented itself and the club worked to meet Saphir’s desire, which concluded in this transfer.”

Since arriving in January 2018, the Algerian international played in 76 MLS games, scoring 20 goals and adding 21 assists. He notably helped the Impact win its 10th Voyageurs Cup in 2019 and also featured in Concacaf Champions League play.

Taider led the Impact with six assists and was second on the team with four goals. His departure could see Lassi Lappalainen play more centrally going forward in Thierry Henry’s squad.

Ralph Priso signed as a Homegrown Player on Wednesday, becoming the 25th player in club history to sign for the first team from the academy. Priso made five appearances for Toronto FC II during the 2019 USL One regular season.

“Ralph is a talented young player and we are excited to add him to our MLS roster. While he has earned this opportunity through hard work, determination, and great commitment on behalf of his family, his signing is also a full illustration of the club’s commitment to developing players within the community, and our player development pathway,” said Toronto FC General Manager Ali Curtis. “Ralph performed very well within our academy and USL team, and has been excellent these past few months training with the first team. We’re excited about Ralph and the future.”

Priso signed with the Young Reds in March 2019 and made his professional debut when he started against Richmond Kickers in August of that year. He played for Toronto FC III during the 2018 League 1 Ontario, where he scored one goal in six appearances.

FC Cincinnati reached a milestone on Wednesday, signing its first academy product to a Homegrown deal.

Goalkeeper Beckham Sunderland has trained with FC Cincy’s first team and has now signed a first team deal. The 17-year-old has been added to FC Cincinnati’s roster and is available for selection for the remainder of the 2020 MLS regular season.

Sunderland joined the FC Cincinnati Academy in the program’s inaugural 2019-20 season. He made a combined nine starts in net for the Under-16/17 team in the U.S. Soccer Development Academy season. Prior to joining FC Cincinnati, Sunderland spent time in both the Portland Timbers and Chicago Fire FC academies.

“We are happy to be able to sign our first FC Cincinnati Academy product to a first-team contract as a Homegrown Player,”General Manager Gerard Nijkamp said. “We decided to keep Beckham with our first-team group this year in training as opposed to with our academy to be able to make a better assessment of him. Based on his performance and his ability to adapt to the professional environment, we feel he has earned an opportunity within our roster.”

FC Cincinnati remains in 13th place in the East, five points out of the final playoff spot.