Sebastian Soto on USMNT or Chile: “Decision could come soon” 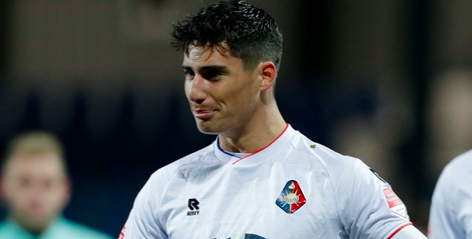 Which nation Sebastian Soto will represent on the international stage remains unknown, but the mystery might soon be over.

Soto told NHSport earlier this week that he may make a decision as to which national team to represent in the near future. The 20-year-old striker that is on loan at Dutch side SC Telstar from English outfit Norwich City has drawn interest from both the U.S. Men’s National Team and Chile, but he has yet to pledge his allegiance to either.

“The decision process is coming,” said Soto, who was born in the United States and has a Chilean father. “I think it should be time to make a decision in the next few days. Maybe in the next week or two.”

The timeline Soto laid out is near when call-ups are expected to be made for next month’s international window, which runs from Nov. 11-19. The USMNT is scheduled to play at least one friendly in England during that period with a squad of only European-based players, while Chile has another pair of World Cup Qualifiers.

Soto rebuffed recent reports that stated he had turned down a call-up from Chile earlier in October, revealing that he is in constant communication with La Roja head coach Reinaldo Rueda.

“I don’t have my Chilean passport yet, and to be honest we are working on that,” said Soto, who has only represented the USMNT at various youth levels. “I didn’t say no to him at all. Me and the coach stay in contact a lot. Rueda, he’s a really good guy.”

While Soto looking to get his Chilean passport does not seem to bode well for the USMNT’s chances, the youngster stated that he is still at “50-50” over which country to represent internationally.

He wants to make a decision soon, but added that it depends on how things play out with each nation.