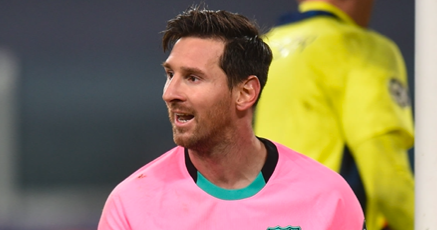 Ousmane Dembele and Lionel Messi both scored as the La Liga side remained unbeaten in group stage action after a 2-0 road victory.

Alvaro Morata looked to have tied things up for Juventus not long after, but VAR ruled in favor of offsides and left the Old Lady goalless. The Spaniard would be left frustrated on the night after being denied by VAR once again in the 57th minute once again for offsides, despite scoring past Marc Andre ter Stegen.

Merih Demiral was sent off for Juventus in the 85th minute for a second yellow card before Messi iced the win for Barcelona in stoppage time. Ansu Fati won the foul after a clumsy challenge from Federico Bernardeschi, allowing Messi to score into the top corner.

Barcelona stays in first place with the win while Juventus is in second.

Manchester United waited until the end of October to pick up its first home win of the season, but it came in fine fashion over in-form RB Leipzig.

Marcus Rashford netted a hat trick for the Red Devils while Mason Greenwood and Anthony Martial also scored in a 5-0 thumping at Old Trafford.

Greenwood’s goal proved to be the winner as the young midfielder slid a shot past Peter Gulasci and into the bottom-right corner.

The Red Devils continued to pile on the pressure after halftime with its final four goals coming in the final 16+ minutes. Bruno Fernandes played in Rashford in the 74th minute to extend the hosts lead before the English striker added his second of the night after a Dayot Upamecano error.

Anthony Martial scored from the penalty spot after being fouled by Marcel Sabitzer moments prior ahead of Rashford’s third and final goal of the night in stoppage time.

Despite winning its last four matches, RB Leipzig was atrocious at the back and only created two shots on goal in a dismal loss.

Paris Saint-Germain rebounded from a Matchday 1 loss at home by shutting out Istanbul Basaksehir 2-0 in Turkey.

Everton loanee Moise Kean netted both goals for Thomas Tuchel’s side in a second-straight shutout win in all competitions.

After being held goalless in the opening half, PSG made the most of its opportunity after the half-time interval. Kylian Mbappe’s corner kick was headed home by a wide-open Kean in the 64th minute before the Italian forward netted his second of the match.

Mbappe once again set up his teammate, allowing him to hit a left-footed volley into the bottom corner.

Keylor Navas made four saves as PSG moved to second place in the group.

Here’s all of Wednesday’s UCL results: