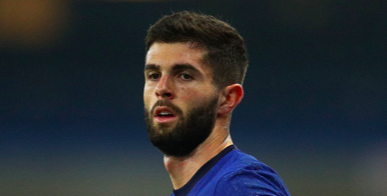 Christian Pulisic made his return from injury for Chelsea on Sunday and will now look to make a major impact for the Blues in UEFA Champions League action this week.

Pulisic played the final 16 minutes of Chelsea’s goal-less draw with London rivals Tottenham on Sunday, showing some positive moments as a substitute. The 22-year-old is back and fit for Frank Lampard’s side, giving Chelsea another versatile option for Wednesday’s Group E showdown with Sevilla. Both teams are level on 10 points apiece in the group with only one match remaining after this week’s clash. Pulisic did not feature in a Matchday 1 0-0 draw with the Spanish club at Stamford Bridge, but could have a vital say on which spot the Blues finish the group in.

In South America, Johny Cardoso and Internacional face off against Boca Juniors on Wednesday in Copa Libertadores action.

Here is a closer look at this week’s action involving Americans Abroad:

Cameron Carter-Vickers is OUT (Injury) for Bournemouth.

Lynden Gooch is OUT (Injury) for Sunderland.